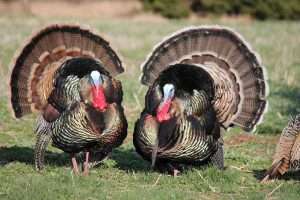 Do you have the skill and patience?

Turkey hunting is growing in popularity and in Colorado, exceptional hunting opportunities are offered for two sub species during two separate seasons – the Merriam, which are native to Colorado, and the Rio Grande, or Rios. The Rios were introduced on the Colorado high plains in the 1980’s, though both species are often seen in Gilpin County. They can be identified by the tips of the tail feathers on the males. Merriam tail feathers are tipped in white while the Rios have buff or tan tipped tail feathers.

Colorado Department of Parks and Wildlife (CDOW) offers two turkey seasons during the year. The spring season runs from about the second week in April to about the third week of May. The fall season runs from roughly the first of September until the first of October in most GMUs. A specific Turkey license is needed to hunt turkeys, which costs $24 with a $10 Habitat Fee The license is almost as elusive and hard to obtain as the turkey itself. Very specific dates to apply for very specific seasons in even more specific Game Management Units (GMU).

Gilpin County is covered by two separate Game Management Units (GMU). GMUs 38 and 29 split the county in half with the line being roughly near Rollinsville running east and west. Both GMUs are offered in the over-the-counter Spring Bearded Turkey license, but are not available during the fall season.

The history of the Merriam is one of the comeback stories of all time. When Colorado was being settled, pioneers and settlers nearly hunted Merriam’s to extinction, almost erasing this magnificent bird from Colorado’s ecological system. By 1930 the birds were almost extinct. Through strict managing and re-introduction programs, turkeys have been a huge success to the point that they are a common yard feature in subdivisions throughout Gilpin County.

The myth that wild turkeys are dumb is about as far from the truth as it can be. Turkeys are gifted with excellent hearing and eyesight and are always on the lookout for food and predators. They have their own specific language that incorporates different clucks, screeches, and purrs for the many different situations the flock might encounter. Hens dominate the flocks in numbers, thus they are the most vocal and most often heard when the flock moves through an area.

To be a successful turkey hunter, one has to dress in camo from head to foot, even camouflaging your shot gun. A hunter must sit perfectly still overlooking a “strutting area” and call with one of the many calls available on the market, and the “Bearded Tom Turkey” will come running to you for a one-on-one engagement. Sounds real simple, right? However, it is not that simple. Once a hunter locates the flock, which can take days in itself, then one must locate the nearest strutting area that is void of houses, hikers, pets, and livestock. Once this is all in place, the hunter must locate a good area sit. One good technique is to set up a ground blind either with natural cover or a purchased camo blind. Then comes the waiting, more waiting, and even more waiting. A call out now and again doesn’t hurt, but it is best if the tom initiates the conversation with that familiar gobble. Once the hunter hears the gobble, they are required to scratch out on the call all the sweet chirps and purrs that a tom wants to hear. If the tom does take up your offer to party, and comes in sight, the hunter must not move a muscle and let the tom slowly work towards the hunter. While striking a statuesque pose, the hunter experiences a whole set of issues. Muscles get tired, skin starts itching, coughing and sneezing are out of the question, and in late spring there are even ticks! Want an exercise in self-control? Try being totally still, and have a tick crawl up your hand. I don’t mean to give you the heebie-jeebies but it’s all in the name of pursuing the elusive high country turkey.

Spring Turkey season is a great time to dust off your gear, get out into the woods and enjoy all the sights and sounds that nature has to offer. Expect to spend several hours stalking, listening, and occasionally calling. If you’re lucky enough to get a glimpse of the magnificent upland birds, it’s a thrill. If you bag a turkey, consider yourself a skillful and extremely lucky hunter.

Think I’ll run over to the local convenience store and get a turkey sandwich. This sounds much easier than turkey hunting.

END_OF_DOCUMENT_TOKEN_TO_BE_REPLACED

Where the dead get to tell their story By Jaclyn Schrock On Saturday, August 21, the Gilpin Historical Society held their annual Cemetery Crawl. Tickets allowed the shuttle of hundreds of guests from the Teller House parking lot to the Cemetery. Depending on v... END_OF_DOCUMENT_TOKEN_TO_BE_REPLACED

Benefitting the county, schools, and much more By Don Ireland   This year marks the 30th anniversary of casinos opening in the former little mining towns of Black Hawk, Central City and Cripple Creek, Colorado. In those early years, smoking was allowed inside ... END_OF_DOCUMENT_TOKEN_TO_BE_REPLACED