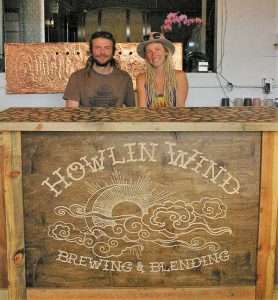 Owners Melissa and Zach are living their dream

A new brewery is opening in Rollinsville across the street from the historic Stage Stop called Howlin’ Wind Brewing and Blending. As they furiously prepare to open their doors this Saturday, June 26th, owners Melissa Nicholson and Zach Delashmit took a break from their preparations to answer a few questions about themselves, their relationship, and their shared love for beer craft.

Melissa’s family moved to Colorado when she was 10 years old. She has tried to leave the state a couple of times since, but it never stuck. Melissa loves beer and is fascinated about the entire process. She sought employment that would feed her fascination and went to work at a fermentation supplier and a home-brew business in Boulder where she learned much about the craft. While fermenting in brew business, Melissa also enriches her artistic soul by making fashionable hats and is working with her friend Brenna to open The Gnome Wrangler adjacent to the brewery. About six or seven years ago, she ended up living in Nederland where she first met Zach.

Zach grew up in Illinois and went to school near Chicago. He is a science nerd and loves anything “science-y.” Zach often vacationed in Colorado for the snowboarding, the hiking, and the camping, so he gradually saved up enough money to move here. About six or seven years ago, he walked into Backcounty Pizza in Nederland and saw an attractive woman. He remembers thinking, “How can I take this woman on a date with me?” It just happened Zach had tickets to a concert and he asked Melissa out. It did not go well, and they went their separate ways. Melissa left Nederland for a year or two, but soon after she came back, she ran into Zach at a coffee shop. They decided to go snowboarding and Zach offered her a six-pack of his homebrew and sparks flew. Melissa and Zach have been life partners ever since.

Melissa and Zach both worked at the same home-brew business in Boulder where they learned that they shouldn’t take too many things about brewing as dogma; its okay to paint outside the lines, try new things, and be creative when things go awry. They dreamed of opening their own brewery, melding Zach’s science geekiness with their shared passion, but knew they need just a little more research, so they took an extended trip to Belgium and set about the countryside visiting breweries, interviewing brew masters, and naturally sampling all Belgium had to offer. They discovered how many brewers will blend different beers for a new flavor and are incorporating that philosophy in their own brewing. Now, they are a few short days away from realizing their dream and opening their own brewery.

For Melissa, one of the challenges in pursuing her dream is being a brew master in a male-dominated industry. In her prior work, shoppers would ignore her, ask if there was anyone else that could help them, and treat her as if she were incapable of helping. She never allowed the discrimination or snarky remarks to keep her from following her dream. Zach “has always stood behind me and we’re truly a team in all areas of the business.” Melissa added that most of her experiences in the industry “have been really positive and supportive” and she never felt she was being mistreated by being a woman. Melissa and Zach lean on each other and value each other’s opinions fully.

Walking into Howlin’ Wind Brewing and Blending you will never recognize the building as the former location of Tesco or Buffalo Wire Works. Melissa and Zach have transformed the location into a pleasant inviting brewpub featuring a gorgeous wall mural and beautiful bar topper made from the downed trees on their land. As Melissa says, “We adore beer, but we also love people and we think we have a really cool community and we have a great gathering space for people.”

The soft opening for the brewery is this Saturday, June 26 from 1:00 pm to 11:00 pm. The expected schedule is to be open Thursday through Sunday with the same times. On tap is New Horizons Saison; Trail Snacks Kolsch; Cloudy with a Change of Rainbows Hazy IPA, and Belly Full of Sunshine Foeder Apricot Sour, along with Love Tractor Blackberry Sage Kombucha, and Bubbly Grapefruit water. A Foeder (pronounced food-er) is an upright oak barrel which gives a subtle oak flavor to the beverage.

Melissa and Zach are a great addition to the Gilpin Community and would love to see you, so come on by and enjoy their creations.

END_OF_DOCUMENT_TOKEN_TO_BE_REPLACED

Where the dead get to tell their story By Jaclyn Schrock On Saturday, August 21, the Gilpin Historical Society held their annual Cemetery Crawl. Tickets allowed the shuttle of hundreds of guests from the Teller House parking lot to the Cemetery. Depending on v... END_OF_DOCUMENT_TOKEN_TO_BE_REPLACED