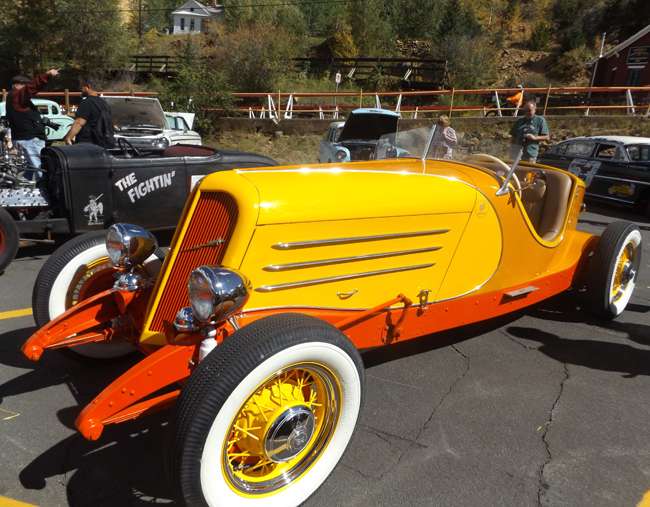 This article is dedicated in memory of Mr. Roy Blake, a good man, a fine angler, a friend, and a fellow gearhead. We’ll miss you bro.

The sound of roaring engines of the past echoed through the hills above Central City, shattering the late summer silence. It’s time for much anticipated Fifth Annual Hot Rod Hill Climb.

The free, three-day event held last weekend was hosted by Nick’s Hot Rod Garage of Englewood. The get together drew over 200 hill climbing hot rods, custom cars and trucks, their drivers, mechanics, and scores of fans from all over the U.S. and Canada. Vendors lined Main Street selling hot rod memorabilia, T-shirts, hats and even a parts booth where an eclectic collection of used and new parts were for sale. Pit passes were available for $10 so fans could mingle with the drivers and get a close-up look at the cars. Additional sponsors included The Reserve Hotel and Casino, KOA Campground, Chrome Insurance, Colorado Springs Rod and Custom, Hop Up Magazine, and many others.

Friday’s activities kicked off with a Reliability Run that started at the Woolly Mammoth parking lot at Hwy 40 and I-70 which featured 100 miles of “Awesome scenery in the Rocky Mountains” that ended in Central City. Hot rods arrived and checked in the entire day with some doing low-speed test runs up the Spring Street hill to the KOA Campground where the Colorado Springs Rod and Custom Team performed tech inspections. Old friends met and caught up and new friendships were made

Rockabilly, 50’s tunes, and Honky Tonk music enhanced the festivities at the Main Street Stage with bands such as Coop & Chicken Pluckers, The Derailers, High Gear Daddies, Adam Lopez and his Rhythm Review, along with Ethyl and the Regulars.

Fords and Mercury’s from 1927 to 1947 dominated the registration list, with General Motors Chevys, Pontiacs, and Oldsmobile’s up to 1959 coming in second in numbers, while Chrysler products rounded out the field. There were some very rare and seldom seen cars there as well. Two Hudson Hornets, a 1951 and 1953 both with inline 6 cylinder engines and the “Twin H-Power” dual, single-barrel carburetors. The rarest car was a 1913 Symplex Speedster owned by Scott Hall from Wichita, Kansas. This monster boasted a 4 cylinder 640 cubic inch Symplex engine with exposed lifters. It has a 6.5 inch bore by a 7.0 inch stroke and incorporated a chain and sprocket drive to the wheels. Most of the parts are custom machined or salvaged from old fire engines that were manufactured around the turn of the century.

A large variety of food and beer was available at the Dostal Ally Food Court, from carnival food to elk brats to fajitas. All was available for every pallet and taste. Then you could wash down those fine eats with a fine selection of craft beer available from the Dostal Alley Microbrewery.

Everyone had a story about their hot rod or their journey to the Little Kingdom of Gilpin. For instance, the Secoras from Omaha, Nebraska.  Tom Sr. and Tom Jr. traveled 550 plus miles from Omaha in their 1932 Ford Roadster with an almost original Ford Flathead engine. Prior to departing Nebraska, Tom Sr. anticipated hot weather on the journey, so he fabricated a simple version of air conditioning. Made out of rolled galvanized sheet metal, the invention would scoop the passing air and divert it into the car. As explained by Tom Sr. “Because the ’32 windshield doesn’t open, I had to come up with something so Tommy and I didn’t fry coming across Nebraska.” Another issue on the trip was gas. Not that kind of gas. The Toms didn’t load up on beans before they left, but the kind you put in your tank. Nebraska is proud of their corn heritage so they put ethanol (corn alcohol) in just about all their gas. “These old engines are ‘teetotalers’ in that they don’t like alcohol of any kind in their gas.” Tom Sr. continues, “We’re sure glad that the real stuff is sold here in Colorado.” Tom Jr. added, “At a top speed of 50-60 miles per hour, the trip to Central City was long, but well worth it. Dad and I had some great father and son time, plus we met a lot of folks that all had questions and comments about our car.”

Hot Rod hill climbers all have one thing in common, their equipment may not be showroom original or it may not be as flashy as the custom hot rods, but what is important is that it works, and if it doesn’t work, they try something else. A quote from long time Hot Rodder and Hill Climber Cal Kennedy, “Use whatever works – it’s going to break anyway.” The Kennedy family, from Wheatridge, CO have been involved in the Hot Rod Hill Climb Community for many years. Prior to the Central City Hill Climb, there was the Georgetown Hot Rod Hill Climb, a 1.5 mile road course up Guanella Pass road. Georgetown hosted the Hill Climb in 1953 and 1954, then Nick’s Hot Rod Garage brought back two 60th anniversary events in 2013 and 2014, and a third in 2015. The Kennedy family was present every year. Mike Nicholas from Nick’s Hot Rod Garage got inspired to bring the Hill Climb to Central City with more space and things to do, and the rest as they say, is history.

On Saturday, the big event was “The Hill Climb.” Cars started on Spring Street up to Roworth Street to Virginia Canyon Road ending at the KOA Campground. The total length of the course was about two miles long with two hairpin corners that were the talk of the pits. Once on top the cars were then diverted down the hill on the two-lane portion of the Central City Parkway back to the Pit area. The cars ran from 10 am to 3 pm with most drivers making several runs to improve times. Some cars were not carbureted for the thin mountain air, thus their performance wasn’t as good as it could have been. Cars sputtered up the hill with an occasional flash from the exhaust indicating that they were running a rich fuel mixture.

Another interesting tale is from Hot Rod Hill Climb fan and photographer Shane Garletts from Ft. Lauderdale, Florida. He shared the perils of his journey to Central City. Earlier this year Shane and his brother planned a trip to Colorado to attend the Central City Hill Climb. When Hurricane Irma hit, it closed down the Ft. Lauderdale airport and knocked out the power to his home. He was worried that he might have to wait until 2018 for his next opportunity to attend. Suddenly the airport opened and Garletts boarded one of the first flights out of the area to Denver. In route, Shane realized that he had left his meds and all his battery chargers back home. He was hoping his camera would hold a charge throughout the race and since it hadn’t been charged for a week, it could run out of power at any time. Catching up with Shane later in the day, his camera continued to work, and a friend back home sent his forgotten items by priority mail to his hotel – he had just received them that afternoon. He was happy that circumstances turned around for him and glad that he took the extra effort to attend the race. In the words of Mr. Garletts, “It is definitely worth it. These folks are the real deal, they help each other with their cars, joke around with each other, and they have a lot of fun. Plus unlike most car shows, we get to see and hear these rods perform.”

After all the cars were back in the pits and engines cooled, it was time for the awards and to announce the highest bidder for a prized ’34-36 Ford four inch drop axle. All proceeds from the auction went to the Hurricane Relief Fund. Charlie Palmer from Golden won the axle with the highest bid of $440.

The Throttler’s Pick Award went to Troy Moyle of Carson City, Nevada for his maroon 1933 Ford 3 window coupe powered by a Cadillac engine.

The Hard Luck Award went to Jimmy Flowers who threw two engine rods going up the hill and drove it back down the hill on the other eight rods.

The Most Runs Award went to John Mackichan from Lincoln, Nebraska. John made nine runs in his 1930 Ford Roadster, Four Banger or “Banger” they call it.

The B.B. Award went to newlyweds Steve and Maggie Cryan from Elma, New York for their 1931 Ford Roadster, Banger.

The P.H. Award went to Woody Bair from Dutch John, Utah for his 1930 Ford Coupe, Banger.

The award for longest distance traveled to the Hill Climb went to Nick Harrison from Beeton (Onterio, Canada), with his 1932 Ford Roadster Flathead V-8.

The weekend ended with a fun run to Estes Park on the Peak to Peak Highway and back to Central City while others made their way back home.

Smiles were the required attire of the weekend in the pits, on the hill, and in the stands. The Hot Rod Hill Climb Staff (the Roosters) and Technical Inspectors kept the drivers, passengers and the spectators safe for a trouble-free event. Mike Nicholas, his family and the folks at Nick’s Hot Rod Garage did a first class job presenting the 2017 Hill Climb. In the words of Central City Manager Danial Miera, “This is one of the best events of the summer, and the Hot Rod Hill Climb is welcome to come back year after year.”

END_OF_DOCUMENT_TOKEN_TO_BE_REPLACED

Benefitting the county, schools, and much more By Don Ireland   This year marks the 30th anniversary of casinos opening in the former little mining towns of Black Hawk, Central City and Cripple Creek, Colorado. In those early years, smoking was allowed inside ... END_OF_DOCUMENT_TOKEN_TO_BE_REPLACED