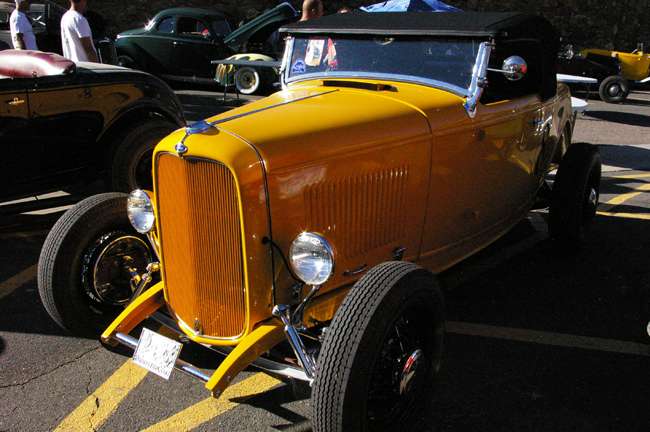 Central City hosts most fun event of the year!

Drivers start your engines! This is the sound that indicated the start of the much anticipated 6th Annual Hot Rod Hill Climb.

Friday’s activities kicked off with a morning Reliability Run that started at the Wooly Mammoth parking lot at Hwy 40 and I-70, featuring a 60 mile run of “The most awesome scenery in the Rocky Mountains” that concluded at the Big-T parking lot in Central City. Hot Rods arrived and checked in the entire day with some doing low-speed test runs up the hill to the KOA Campground. Old friends caught up, new friendships were made, and excitement filled the air.

A large variety of food was available at the Dostal Ally Food Court. Food was served up that would satisfy every pallet and taste. Then you could wash down those fine eats with a modest selection of craft beer available from “Buddy and the crew” at the Dostal Alley Microbrewery.

Rockabilly, 50’s tunes, and Honky Tonk music enhanced the festivities at the stage located in the Dostal Ally parking lot with bands such as Adam Lopez and his Rhythm Review, Coop & Chicken Pluckers, Hot Club of Cowtown, Rodney James and the High Gear Daddies, and our favorite, Ethyl and the Regulars

Some drivers drove their hot rods to the event and some were trailered because they are not street legal, but once they got to the City of Central they put on their biggest smile and challenged the hill. Saturday was the big event with the Hill Climb. The wait to get to the starting line lasted 45 minutes, but once at the starting block, the starting girl, Amy, would jump in the air and drop the flag and the vintage engines would roar to life. Cars started on Spring Street by the Big-T staging area up to Roworth Street to Virginia Canyon Road, and ending at the KOA Campground. The total length of the course was about two miles long with two wicked hairpin corners. Once on top, the cars were then diverted down the hill on the two-lane portion of the Central City Parkway back to the Pit area. The cars ran from 10 a.m. to 4 p.m. with most drivers making several runs to improve times. Some drivers simply stayed in line or were on the hill the entire event. They would come down the return hill and get right back in line. In their words,” We came to climb the hill, not sit in the parking lot!”

Owner/ drivers were more than happy to share the story of their rods and how they got to The Little Kingdom of Gilpin. Some rods are literally considered a member of the owner’s family. One such story was of Dustin Scaplo from Black Forrest, Colorado and his sweet little 1932 Ford five-window coupe. He found a Polaroid picture on a swap table at a Pueblo car show. On the back of the picture was written that the car was for sale and some contact information. He followed up and discovered that the car (basically a body on a rolling frame) was a former race car that was stored in a barn in Kansas. Scaplo bought it at the age of 16 years old in hopes of having it completed for his high school graduation. It turned into a family project that sparked a lot of fond memories with his dad and grandad coaching and helping him on the project. All the parts on the car are original with the exception of the piston gearshift knob and the homemade headers. His mom, Ms. Diane, is a part-time resident in Central City and also an avid hot rod fan. She explains that the Hot Rod Hill Climb is perfect. We can take a few runs up the hill and actually stay at night in our own home five minutes away.

Hot rod fans came from all over the country such as Duke and Ashley Black from Salt Lake City, Utah. Duke has been following the Hill Climb for the past four years. Finally they made a mutual decision this year to make the Central City Hill Climb their vacation destination. Duke explained,” This was kind of a bucket list thing that we centered a four-day vacation around.” Ashley continued “This year we decided to get a sitter for the kids and head out to the Hill Climb.” The Blacks were surprised and pleased that the race is set in a historic mining district loaded with the beautiful fall colors.

After all the cars were back in the pits, engines cooled, it was time for the awards.

The weekend ended with a Sunday morning run to Estes Park on the Peak to Peak Highway and back to Central City.

Again, smiles were the required attire of the weekend in the pits, on the hill, and in the stands. The Hot Rod Hill Climb Staff (the Roosters) and Technical Inspectors kept the drivers, passengers and the spectators safe for a trouble free event. Mike Nicholas, his family and the folks at Nick’s Hot Rod Garage did a first class job presenting the 2018 Hill Climb. This is one of premier summer events hosted by the City of Central. Folks from around the world descended on Gilpin County just to run the hill or experience the Hill Climb.