Horses in bars – where else but Gilpin County! 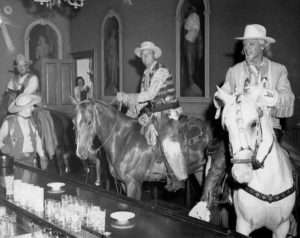 Black Hawk and Central City were a little different before gaming

By Friends of Gilpin County

The Riding Horses into Bars and Round-Up Riders are worthy of quite a few stories and photos! Stephen Buck

Horses hitched to a pole while their rider went in for a beer. At Crooks in Black Hawk and by Toll Gate in Central City. Those were the days! Mary Lou Mihalik Price

We had horses in the Glory Hole Beer Garden. Loved it. Susanne Staruk

I had Kevin ride his horse into Crooks one Halloween when I was bartending. Michele Metallo Fox

Must have been during the Pony Express days or something the Teller House set up! The other one I remember is checking guns from people coming in to drink at the Glory Hole. We had a rack next to the mirror behind the bar to hang holster and all. They still had the hitching posts up until gaming came in, but one of my fondest memories was sitting at the bar when Bob Crowe drove his little white pickup truck right up on the boardwalk in front – parked, got out and came in for a drink. His goat, who went everywhere with him, was in the back of the truck too! Sammy Sheryl Weitz

That was the Round up Riders of the Rockies. 50-60 men on beautiful Palomino stallions would ride in from dry lake where they had set up camp with servants to help them. They would ride into Central City in formation and then ride into the Teller House Bar for a few toddies – lots of money club. James V. Collins

These were the Round-up Riders and they came several summers. Dad had his truck line and hauled food, tents, tables and more to where they would camp. Was fun going with him. They would tie their horses in front of the Teller House and wander around town, probably from bar to bar. Frank Ricketson (sp?) who was a big shot with the Opera was a member. Beautiful horse. Kind of like a miniature version of Ride the Rockies, but on horseback. Diane Blake Rittenhouse

Tim’s brother Dennis Champine (mayor of Aurora, Colorado for eight years) was a member on a few of those rides. Sounds awesome! He still always owns a horse. Deena Winslow-Champine

Monty Montana is on the horse coming out of the Tellar Bar, Harold Marks is on the left, and me – Danny Begg on the right. Dan Begg

Whatever happened to the Roundup Riders? I remember Monte Montana in the 50-60 era – I polished his boots at my shoe-shine box. One night when older, while we were in the Gold Coin we were wearing our six-shooters. After three hours of drinking we didn’t know if we had two six-shooters or six two-shooters! Doug Prentice

Half the time they would ride the horse into the bar! I have a few memories of that happening. Speaking of riding horses into our local saloons… About six months or so after gambling started one of our cowboy type Zekes had gotten a bit melancholy and was missing the old days (before gambling). I am sure he knocked down a few bottles of courage before he pulled his hat down in the front and rode his trusty steed into the Gold Coin Saloon. Problem was, now the saloon was part of a casino. In a flash of solidarity and to protest the changes to his watering hole, he rode to the back wall, turned around and rode right back out. The casino security staff was in such shock that by the time they got on their feet to do something our Cowboy Zeke had just breached the swinging doors. That was all they saw, the swinging batwing doors and a cowboy with a big hat vanish into the hills. His old hat had protected his identity well enough that no one ever knew who the mystery rider was. When I wrote the little story about it for the Register-Call I just had to use the words from the famous song – Yippee Yi Aaaaa, Yippee Yi Ohhhh, Ghost Riders in the Coin…

Funny thing just happened (years later)… I am one of the few that knew the identity of the Gold Coin Ghost Rider and I haven’t told the story in a long time till this morning on here. Just moments ago the mystery Zeke Cowboy walked through the door where I work – yes, he was horseless this time. When I told him that I had shared the story he laughed and said that was only the half of it. I will continue sharing the saga if anyone wants to know. Teri Metallo

Great story, would love to hear who the mystery rider was and what they’re up to today. Reading all of these stories, I don’t think we all knew how great we had it, and what we had to loose with the changes that were coming. I have loved the pictures and all of the reminiscing – it has brought back great memories! Robin Christensen

I remember the time “Fred” (can’t spell Frucho correctly) rode his horse Fritz into the Gold Coin on Opening Day of the Opera. Thought Jack Brown and Mr. J were going to have simultaneous heart attacks. You could almost hear the beams under the bar’s floor creak from Fritz’s weight. Had a hell of a time backing him out through the swinging doors too! Debbie Griffith

Good story funny I don’t know if any of you know RB he rode his horse into the Nickel and this is when the rest of the place was the Lady Luck Casino. He did it fast, but the tourists ran outside to see him gallop up the street with his duster blowing in the wind – it was awesome! Kiki Foxx

Publisher’s Note: Thanks to everyone for sharing your memories of what life was like in our community prior to gaming, and to Stephen Buck for making this possible! Aaron Storms

END_OF_DOCUMENT_TOKEN_TO_BE_REPLACED

Where the dead get to tell their story By Jaclyn Schrock On Saturday, August 21, the Gilpin Historical Society held their annual Cemetery Crawl. Tickets allowed the shuttle of hundreds of guests from the Teller House parking lot to the Cemetery. Depending on v... END_OF_DOCUMENT_TOKEN_TO_BE_REPLACED