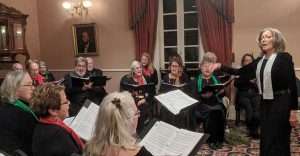 Central City kicked off the Christmas season with caroling, community cheer, and a chorale; combining the warmth and joy of the holidays with a poignant and timely message. On a chilly Friday evening, December 6, 2019, almost 30 people gathered around the three-story tall pine tree adorning the sidewalk at the intersections of Main, Nevada, and Spring Streets. Nestled against the Premium Cigars mural on the south side of the oldScarlett’s building, the mighty tree showed off the ornaments and baubles hung with care by school-children the day before. (Some friendly adult elves rearranged the ornaments more uniformly after the children departed.) Mayor Jeremy Fey spoke briefly, articulating his pride in the community and announcing that, although he has not researched it, he believes he “is the first Jewish mayor to light the Christmas tree.” The Mayor flipped a switch and colorful lights bedazzled the tree reflecting off the shiny ornamentation and twinkling in the gentle breeze. Afterward, the crowd processed the length of Main Street gleefully caroling to the Teller House.

The second floor of the Teller House, which can be accessed from majestic stairs in the mid-section or the adjacent outside garden stairs, carries quite a bit of history – housing an elaborate dining room, kitchen, and housing for special guests over the centuries. That Friday night, hundreds from the community gathered for a much-anticipated annual pot-luck. Trays, platters, and bowls crammed long tables proudly presented by house chefs (and shoppers) extraordinaire. Folks were salivating as they socialized in anxious anticipation. Barb Thielemann led the congregants in a brief prayer of thanks for the food; and then the lines began, headed up by members of the soon-to-be-performing Peak to Peak Chorale.

Shortly after palates were satisfied and stomachs were sated, the Peak to Peak Chorale regaled their audience with songs of the season sharing the tale of Why the Evergreen Trees Never Lose their Leaves: Tales from Hayes Mountain; a classic children’s story by Florence Holbrook. The story takes place near the beginnings of creation and as winter approaches, all the birds have flown south except for one little bird who had broken a wing. The poor little bird reaches out to the trees for shelter and food, but species by species, the trees refuse her until she approaches the pines, spruces, and firs that give her shelter and food. Because of their kindness, Father Winter (God?) curses all the other trees for their selfishness and greed to cause them to lose their leaves during the cold winter months. The Chorale pleased the audience with songs of snow, laughter, cold, blood, selfishness, bigotry, prejudice, friendship, gratitude, rest, and celebration. Particularly poignant were “White Winter Hymnal” and “Give Me Your Tired, Your Poor.” White Winter Hymnal was first recorded by Fleet Foxes and written by Robin Pecknold, but made famous in the United States by the a Capella group Pentatonix. The song seems innocent enough with a happy, bouncing melody until you realize that the lyrics are painting a grotesque picture of humanity. “I was following the pack, all swallowed in their coats with scarves of red tied ‘round their throats to keep their little heads from fallin’ in the snow.” The other song’s lyrics should sound familiar, “Give Me Your Tired, Your Poor” quoting directly from the poem by Emma Lazarus engraved on the base of the Statue of Liberty, “your huddled masses yearning to breathe free, the wretched refuse of your teeming shore. Send these, the homeless, tempest-tost to me, I lift my lamp beside the golden door!” The words from both these songs reflect upon our modern age with a voice of contempt and as a gentle reminder of whence we came. Although the tale of the little bird is known as a wintertime story often read for the Christmas season, its message goes way beyond those borders to beat down the walls of our hearts. The Chorale heartily gave their all to share this message; performing with gusto to the best of their ability giving a performance worthy to open the holiday season.

The annual Tommyknocker Festival is a joyous event where the community comes together with one heart and spirit and is the perfect way to transition from the wearying world to a place of hope, peace, and joy. As you wait for the event to return in 2020, remember to open your hearts and your hands to those less fortunate.

END_OF_DOCUMENT_TOKEN_TO_BE_REPLACED

Where the dead get to tell their story By Jaclyn Schrock On Saturday, August 21, the Gilpin Historical Society held their annual Cemetery Crawl. Tickets allowed the shuttle of hundreds of guests from the Teller House parking lot to the Cemetery. Depending on v... END_OF_DOCUMENT_TOKEN_TO_BE_REPLACED

Benefitting the county, schools, and much more By Don Ireland   This year marks the 30th anniversary of casinos opening in the former little mining towns of Black Hawk, Central City and Cripple Creek, Colorado. In those early years, smoking was allowed inside ... END_OF_DOCUMENT_TOKEN_TO_BE_REPLACED