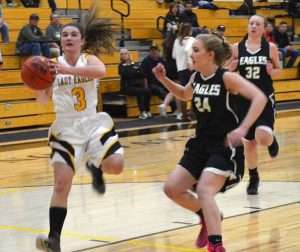 The boys’ junior varsity fared better, winning over RML 39-31. “The boys played very strong and were in control the entire game. Great team effort, with everyone contributing to the win,” said boys’ Assistant Coach Lisa Boulter.

The teams traveled to Lake County on Saturday, December 17; details of those games will be available in a later edition of the Weekly Register-Call. Basketball action takes a break until Tuesday, January 3, when the teams meet Cornerstone Christian at Gilpin starting at 4:00 p.m.

It looked good for the Gilpin girls as they started off with a strong first quarter, besting their opponents 10-2. Highlights included a quick steal by Berkley Davis, who passed to Annabel Diekman for the score, and 2 free throws dunked by Cicely Lepro.

The Lady Eagles continued to do well during the second period, helped by scoring from Lepro and Jessica Wilhelm. Although RML had difficulty making free throws, they began to pick up field goals, and both teams scored 10 points during the second quarter, bringing the score to 20-12 in favor of Gilpin at the half.

Unfortunately, Gilpin had a tough third quarter and lost their lead. RML began to make significant plays, including a couple of 3-point field goals and a steal. The Gilpin girls broke down and were outscored by 18-5 in just a little over four minutes. RML led 30-25 at the end of the quarter.

The Lady Eagles rallied a bit in the fourth quarter, pushing to regain the lead, and it was quite a battle. RML got another steal, but Lepro answered with some fast footwork down the court for a basket and Davis got another steal to drive to the basket. Unfortunately, her attempt was no good, but she got it away from RML again. They retaliated with a steal of their own, and so it went, until Gilpin was within one field goal of tying the game.

Milliseconds before the buzzer sounded, Gilpin’s Keely Schmidt got fouled. There was no time left on the clock, but the refs gave her a chance for a free throw to tie the game. Schmidt’s shot bounced off the rim and the game was over.

Head Coach Jeff Schuessler said, “It was a valiant effort,” noting that the third quarter problems led to the loss.

Cicely Lepro was selected as Player of the Game, scoring 16 points for Gilpin and grabbing 4 defensive rebounds, 2 assists, and 2 steals.

Wilhelm was the rebounding leader, with 4 defensive and 1 offensive. Davis, Lepro, Diekman, and Schmidt each got 4 rebounds. Aspen Nadeau led in assists with 4 and also had 1 block. Davis was tops in steals with 4. The team showed their defensive power with 7 deflections.

Gilpin had 14 turnovers and 10 fouls.

Standouts for the RML team were sisters Jacqueline and Alexandria Dalbotten, who contributed 26 points and 14 rebounds.

As in the girls’ game, the boys played well in the first quarter, holding the lead a couple of times and keeping the score close. RML had first possession, but within moments, Eryk Lorenz stole the ball and dunked 2 points. Gilpin scored 12 points that quarter, and RML scored 15.

The second quarter saw Gilpin continuing to put in a good showing with another 12 points on the board. RML was still ahead with 16 points during the quarter. Wilhelm had a good night, as he boasted three 3-point field goals. RML’s Ilan Gibson was hurt during this quarter and went to the sidelines. With 13 seconds left till the half, RML’s Michael Schlittenhart dunked a free throw. There was a bit of confusion, as the end of the quarter sounded, while the referee called a foul on Gilpin. Schlittenhart went to the free throw line again and made 1 more point to end the first half at 31-24 RML.

The third quarter was jinxed again as Gilpin faltered. RML pulled away by a wide margin half-way through the period and never looked back. At one time, they were 17 points ahead of Gilpin, but Gilpin kept working and were only down by 10 at the end of the third quarter.

The last period started at 43-33. A few highlights were an impressive block by Immordino, a Gilpin recovery after a loose ball scramble, and an RML pass picked off by Austin Boulter. Despite many good efforts, though, Gilpin had to accept a 56-40 loss.

Alex Wilhelm and Matthew Immordino were leading scorers for Gilpin with 11 and 12 points, respectively.

Individual accomplishments included 3-pointers by Wilhelm, Immordino, and Braedyn Perez. Nick Peterson chipped in 6 points and led with 12 rebounds (4 offensive and 8 defensive). Boulter grabbed 7 rebounds (3 offensive and 4 defensive) and topped the team with 3 assists. Immordino had 4 steals followed by Wilhelm with 3, Lorenz and Boulter with 2, and Perez with 1. The Eagles had 11 deflections.

On the negative side, Gilpin had 21 fouls and 16 turnovers.

No statistics were available for RML.

END_OF_DOCUMENT_TOKEN_TO_BE_REPLACED

Benefitting the county, schools, and much more By Don Ireland   This year marks the 30th anniversary of casinos opening in the former little mining towns of Black Hawk, Central City and Cripple Creek, Colorado. In those early years, smoking was allowed inside ... END_OF_DOCUMENT_TOKEN_TO_BE_REPLACED

Where the dead get to tell their story By Jaclyn Schrock On Saturday, August 21, the Gilpin Historical Society held their annual Cemetery Crawl. Tickets allowed the shuttle of hundreds of guests from the Teller House parking lot to the Cemetery. Depending on v... END_OF_DOCUMENT_TOKEN_TO_BE_REPLACED