Hitting the open road with big bikes and friends 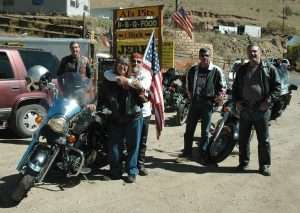 With the fall colors so vivid in Gilpin County and the weather getting a little chill, some of the guys decided that it would be a great idea to take a road trip on the road bikes before the snow falls. John came up with a plan to ride the scenic four mountain passes in a day trip, so Mark, Sam, Tom and I all decided to meet up at Millie’s Café in Central City on Saturday morning for breakfast before heading out on the 180 mile round trip. With temps down to 33 degrees Friday night, it was a bit nippy at first, but with our legs wrapped around a big motor, things warmed up as we headed out the Central City Parkway to I-70 and to Idaho Springs for gas and oil. Once topped off, we headed west to Georgetown, then south up on the winding road to Guanella Pass. With moderate traffic, the pace was slow enough to allow us to gawk around at the sides of the mountain which were lit up with yellows, reds, and greens and a few pocket lakes thrown in for contrast. The top above tree line was cold, but final four miles which were dirt had just been recently paved and the drive down was perfect. Coming down from the pass we ended up at Hwy 285, so stopped to check out the cool metal bike sculptures, the slammed ’49 Dodge pickup, and the old ’32 Ford rat road near Grant. We were tempted by Al’s Pit BBQ, but were still full from breakfast.

We headed west over Kenosha Pass along with a million other people and the change in terrain and stiff winds at highway speeds in the big valley and Fairplay area took all our concentration to stay on the road. We soon turned back north and headed over Hoosier Pass to Blue Lake and on to Breckenridge. Tom thought his bike had a little shimmy coming down off Hoosier, but soon quit, so by that time we had all worked up an appetite for BBQ. Cherokee checked her iPhone and found Moe’s BBQ and we all enjoyed a great lunch.

Heading north from Breckinridge, we turned east before the reservoir and headed up Loveland Pass, passing the Keystone and A-Basin ski areas along the way. We finally ended up back on I-70 heading east back to Idaho Springs and had a chance to enjoy the typical Saturday afternoon congestion of folks trying to get to Denver.

Sam and Tom split off and headed down to Denver, and the rest of us headed home. Everything went well and there were no issues with the bikes, so we logged another memory in our life adventures and look forward to the next one!

END_OF_DOCUMENT_TOKEN_TO_BE_REPLACED

Benefitting the county, schools, and much more By Don Ireland   This year marks the 30th anniversary of casinos opening in the former little mining towns of Black Hawk, Central City and Cripple Creek, Colorado. In those early years, smoking was allowed inside ... END_OF_DOCUMENT_TOKEN_TO_BE_REPLACED