History of the City of Black Hawk safe 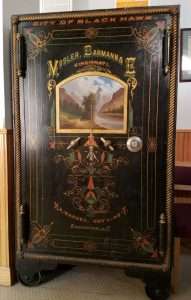 Protector of City Records since 1879

Shortly after the City offices moved into the new City Hall, in December 1877, the need for protected storage for the City’s records became apparent. The City Council apparently did some homework, and in the minutes of August 4, 1879, record is made that: “On motion of Alderman Wain, the Council purchased of Mosler Bahmann & Co. a No. 35 fire proof safe, size inside 48 inches high, 26 inches wide, 16 inches deep. Terms in Cincinnati Ohio, city warrants, for four hundred and fifty dollars, less freight to Black Hawk Colorado, due in 15 months from date of shipment, without interest.”

The very next day an order form, addressed to Mr.  H.H. Warner, Registered Agent for the company, was completed and signed by George Snyder, Mayor, and filed by Robert S. Haight, City Clerk. The order further specified: “Paint ‘City of Black Hawk’ over door in fine heavy block letters shaded with red ornament…in good style throughout…”

The $450 sum was a major investment for the young City, considering that City Hall itself cost just over $2,500! And even though the railroad had reached Black Hawk seven years earlier, the freight part of the bill was a hefty $83.73; as this was to be billed back to Mosler Bahmann & Co, that meant the actual cost of the safe was $366.27.

The freight bill was approved for payment on September 2, 1879, less than a month after the order was placed; so apparently the company beat the 15 month deadline by a full 14 months. As the first floor of City Hall was used for the storage of horse-drawn fire wagons used by the local volunteer fire company, the safe was installed on the  second floor, probably with horse-drawn winches and similar mining equipment and techniques  that  would have been commonplace in the booming gold camp. And there it remained for more than 100 years, protecting the important records of the City.

With the advent of gaming in 1990, the demand for City services – and hence City government – grew dramatically. With the historic preservation funds generated by gambling, the old safe was painstakingly restored by Rocky Mountain Conservation at a cost of nearly $10,000. A decision was made to completely renovate City Hall, and the office of the City Clerk – the only staff position that was filled continually over the town’s 130-year history – was moved to the first floor. When restoration work began, a hole was cut in the building’s floor and the safe lowered on a forklift. It was stored at the fire station for the year that the renovation took, and returned to its new first-floor entryway location in time for the grand reopening of City Hall in the spring of  1996.

Though the volume of City records has multiplied many times over, the safe still houses some of the City’s earliest documents. Most of these have been microfilmed, and are available for viewing in this fashion in the Clerk’s office.

END_OF_DOCUMENT_TOKEN_TO_BE_REPLACED

Benefitting the county, schools, and much more By Don Ireland   This year marks the 30th anniversary of casinos opening in the former little mining towns of Black Hawk, Central City and Cripple Creek, Colorado. In those early years, smoking was allowed inside ... END_OF_DOCUMENT_TOKEN_TO_BE_REPLACED