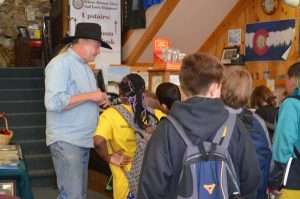 Students from Gilpin Elementary School’s traditional and Montessori fourth-grade classes were treated to a tour of Central City’s historical venues and government offices on Thursday, May 2. The purpose of the field trip was to educate the youngsters about our local history and government.Fourth grade is the year when students focus on Colorado history, and Central City and Gilpin County are rich with tales of the people and events that shaped our area. Throughout the day, the classes saw many fascinating sights and heard countless tales.

Barbara Thielemann, a member of the Main Street Central City board, organized this second annual outing. She reported that the field trip was paid for by a $300 grant from Gilpin County.

About 25 pupils and their teachers, Susan Sepanik and Beth Olkowski, gathered in the public parking lot across from City Hall. Gilpin History Museum Director Dave Forsyth was the general emcee. During the tour, the boys and girls asked questions about things they saw that were not necessarily part of the presentation. Forsyth gladly and knowledgeably answered these queries.

One admiring student asked, “How do you know so much about history?”

“A lot of research!” was the museum director’s reply.

He called the kids’ attention to mine tailings in the area and explained that miners would pull out a ton of rock to get three or four ounces of gold. The students were interested to find that the parking lot is where the Central City train station used to be. A passenger train traveled down to Black Hawk. Amazingly, it was faster to walk between the two towns because of a switchback over the steep terrain — a one-mile trip on foot was four miles on the train.

In the City Hall meeting room, City Planner Ray Rears explained the concept of local government by comparing it with leadership at the federal and state levels. Rears encouraged the kids to participate in government and vote as they got older.

Then, Kathy Swafford from The Legendary Ladies, a women’s historical performance organization, narrated the life of medical researcher Florence Sabin, who was born in Central City in 1871. She looked the part, garbed in a doctor’s white lab coat and wearing her hair in a bun. Kids listened intently as the character told of opening doors for women in the medical profession.

Sabin was the first woman to hold a full professorship at Johns Hopkins School of Medicine, the first woman elected to the National Academy of Sciences, and the first woman to head a department at the Rockefeller Institute for Medical Research. Amid all the honors, her passion was the tiny world under the microscope, doing research on how cells defend against disease.

During her retirement, she served as a public health activist in Colorado, traveling the state to discover reasons for its high death rate. Her findings led to the passing of health care legislation.

Before the group adjourned to the Belvidere Theatre at the south end of Main Street, Rears explained that due to its condition of disrepair, the kids couldn’t go inside.

“The people of Central City hope to make the building a community center and theatre again,” he said, noting that it would take nearly $5 million to renovate the building.

As the boys and girls peered inside the Belvidere’s windows, Forsyth commented that a fire in 1874, likely caused by a chimney fire, destroyed almost every building on Main Street. New brick buildings were erected, including the Belvidere. When the competing Teller Opera House opened in 1878, the Belvidere diversified, housing such entities as a bottling works and retail shops.

The group walked past Main Street casinos to the Central City Opera House on Eureka Street.

“May 6th marks the 160th year after the Colorado gold rush. There was so much gold found here that Central City was proposed as the capital of Colorado. The Opera House had Wild West shows and touring theatre groups. But Denver was made the capital. By 1881, Horace Tabor built the Tabor Grand Opera House in Denver, and that took business away from the Central City Opera House.”

The kids followed Chin next door to the Teller House. Built in 1872, the Teller was the finest hotel between St. Louis and San Francisco and the first hotel in Central City with a flush toilet.

Four dollars were charged for a bedroom, sitting room, and dinner. However, the average wage for seven days’ work at that time was fifty cents. Only the wealthy could afford to stay at the Teller.

“There was a school for white children and a separate school for black children in Central City. The black school was defunded, so black children were sent to the white school. Some parents said they wouldn’t allow it. Teller was a lawyer and said he’d make them allow it. He sued the school district and won. All the kids were ‘integrated,’ or together. Teller looked out for everyone.”

The building is now owned by the Opera House Association and has not been a hotel since 1969, Chin said.

St. James United Methodist Church, located at 123 Eureka Street, is the oldest Protestant church in Colorado. Former Virginia slave Clara Brown settled in Central City and made her home available for services while St. James was being built.

The sanctuary dates from 1872. Thielemann pointed out the original wooden pews and the stained glass windows. The ornate carpet was replaced in the 1990’s but replicated the original pattern. The pipe organ was built in the 1890’s, has over 800 pipes, and is listed on the National Historical Register.

It was the first time some of the children had ever been in a church. They learned that not only is St. James a historical building, it is actively used for church services, weddings, funerals, and other needs.

The group trekked up East First High Street to the Gilpin History Museum. Prior to their tour, the kids ate lunch outdoors and investigated the historical mining equipment displayed on the lawn.

Director Forsyth said, “This building was a school when it was first built. If you had lived 100 years ago, this is where you would have gone. It’s been a museum since 1971.”

The teachers guided their students around the exhibits of the frontier Main Street, schoolroom, fire department equipment, typical home and family scene, and more. The kids marveled at the tiny classroom desks, discussed how the launch of Gilpin County’s submarine could have been more successful, and enjoyed pulling the rope that set the bell in the tower clanging.

Gilpin Historical Society member and Wild Bunch actor Mike Keeler welcomed the students to the Central City Visitor Center on Main Street. Keeler was excited to announce that the Wild Bunch had been invited to perform its high noon showdown in Wichita at the Old Chisholm Trail.

Central City was founded in 1859. Keeler described the process of placer mining, noting, “Kids lit the dynamite and then ran! They were faster than the grown-ups.” He reported that child labor was common back in those days, as children had to help support their families.

He engaged the kids with stories of Central City sports in the early 1900’s, which included women’s basketball, men’s and women’s baseball, Little League, and football. All games were played where the kids’ tour started at the parking lot.

The students were intrigued by Keeler’s mention of the Cemetery Crawl; he clarified that the event takes place yearly at one of Central City’s eleven cemeteries and that actors tell the life stories of the people buried there.

Manager Michele Rouseau led the visit at the Gallery, which is located in Washington Hall on Eureka Street. The kids were immediately drawn to the old jail cell, which is no longer in use but has the original door.

“The jail was completed in 1862,” Rouseau said. “In 1864, the building was the First Republican District Court of the Territory of Colorado. Washington Hall is the longest continuously used building in Colorado. It’s been used for 72 years as an art gallery.”

Sahari McCormick, Gilpin Clerk and Recorder, took the kids to the County Commissioners’ meeting room. She explained that Gilpin County was formed in 1861. The students recalled that Colorado became the 38th state in the Union in 1876 and were impressed by the huge 38-starred flag that hung at the front of the room.

County Manager Abel Montoya joined the classes. “What happens in this room every other Tuesday?” he asked.

The answer was Board of County Commissioner public meetings. “There are three elected Commissioners. They decide how much money to spend on our county services.”

The kids’ eyes grew round at the size of the budget – $25 million last year. Half comes from property taxes, mostly from casino property taxes, Montoya said. Services include the jail, sheriff’s office, community center, fair, programs to help the needy, emergency services, and road plowing.

The tour ended on a sweet note as Montoya asked if the children had heard of Jolly Rancher candies. Of course. “The family who started that candy company lived here in Gilpin, he said. They started it in the late 1960’s.”

END_OF_DOCUMENT_TOKEN_TO_BE_REPLACED

Benefitting the county, schools, and much more By Don Ireland   This year marks the 30th anniversary of casinos opening in the former little mining towns of Black Hawk, Central City and Cripple Creek, Colorado. In those early years, smoking was allowed inside ... END_OF_DOCUMENT_TOKEN_TO_BE_REPLACED

Where the dead get to tell their story By Jaclyn Schrock On Saturday, August 21, the Gilpin Historical Society held their annual Cemetery Crawl. Tickets allowed the shuttle of hundreds of guests from the Teller House parking lot to the Cemetery. Depending on v... END_OF_DOCUMENT_TOKEN_TO_BE_REPLACED