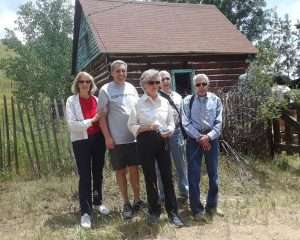 The cabins were purchased by Gilpin County early in January 2018. In February 2018 the Commissioners approved Resolutions 18-01 and 18-02 designating two cabins at 104 Redtail and 114 Redtail Road as Local Historical Landmarks. The cabins were built around 1900 and were slated for demolition in March of 2017 by the former property owners Robert and Jennifer Williams. Gilpin Commissioners rejected the demo request and proceeded to purchase the properties for an eventual Local Historical Landmark designation. This action was almost a year in the making, but through hard work by the Gilpin County Historical Preservation Advisory Commission and Gilpin County officials, the cabins were saved from the ravages of progress. According to Gilpin County Community Development Office Manager Tami Archer, “The Historic Structure Assessment (HSA) grants we applied for were just awarded this week, and will be used to fully assess the condition of each cabin, and then recommendations will be made for the restoration. We intend to apply for grants to help fund the restoration as well.”

The two log cabins sit within forty feet of each other on Redtail Road, but each has a very different story to tell. The cabin at Lot 104 is a 16’x16’ one story dwelling with a 10’x16’addition, whereas the cabin at Lot 114 is a loose definition of a one and a half story cabin. The upstairs in 114 cannot be occupied due to the shaky construction of the floor. According to the Barney family, former owners of both the cabins, they might have been built somewhere around 1887 for two men working a nearby mine located on the larger parcel. A deed research was conducted that revealed that the .2 acre lots were separated from the larger parcel that dated the structures around 1900. There are no records that date the cabins any earlier. The Barney family first purchased Lot 114 around 1934, then purchased Lot 104 nine years later in 1943. Since then generations of the Barney family spent summers on the properties known as “The Cabins.” As we toured the cabins with the Barneys, they would recall where items were located, and what floor covering was installed and when. Bettie (Barney) Seberg pointed out that the western style curtains that still cover the windows were made by her mother Lucille years ago. Bob Barney lived in the 104 cabin back in the 90’s while he was building his own house nearby.

What does the future hold?

Once the historical evaluation is complete, a complete structural restoration seems to be in the future of these cabins. According to Commissioner Watson these cabins could be used for educational purposes for nearby school districts or any number of purposes. They were asking the open house visitors for ideas on what else could these historical structures be used for. The only downfall is the location. No matter which way visitors approach this area, it requires time and a good vehicle. The nearest resemblance of a paved road ends about two miles away.

Overall, the open house had a good turnout. Vehicles filled the open parking areas to near capacity. After the tour, a brief talk outlined how these historical structures will be cared for and the possibilities for their use. The Commissioners were pleased with the event and expressed their thanks to all the folks that made the open house a success. If anyone has any suggestions on how these cabins can be utilized, the Gilpin County Commissioners and/or the Gilpin County Planning folks would like to hear from you. Contact can be made at www.co.gilpin.co.us.

END_OF_DOCUMENT_TOKEN_TO_BE_REPLACED

Benefitting the county, schools, and much more By Don Ireland   This year marks the 30th anniversary of casinos opening in the former little mining towns of Black Hawk, Central City and Cripple Creek, Colorado. In those early years, smoking was allowed inside ... END_OF_DOCUMENT_TOKEN_TO_BE_REPLACED