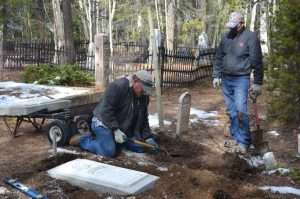 Part of Gilpin County’s valued history is found in the stillness of a forest cemetery above Nevadaville. About 600 pioneers from the 1800’s and early 1900’s have their final resting place at the peaceful site among the aspens and pines.

Sadly, a number of the headstones, several belonging to young children, have fallen into disrepair or been damaged over the years. It was the goal of Gilpin County government and the Historic Advisory Commission to remedy this situation by having several of the stones repaired. Restoration on some of the most badly damaged stones was recently completed, and this past Tuesday a crew arrived to reinstall the headstones.

Bald Mountain Cemetery, more familiarly known as the Nevadaville Cemetery, is located on U.S. Forest Service Land and maintained by Gilpin County under a special use permit.

As a bit of background, the name “Bald Mountain Cemetery” was the result of some puzzlement back in the 1860’s as to where mail should be sent. The town of Nevadaville, founded in Gilpin’s earliest gold mining days, was also known as Nevada or Nevada City. That created confusion with mail going to Nevada, California. To try and clear things up, the post office in Nevadaville was called the Bald Mountain Post Office. The residents, however, persisted in calling their town Nevadaville, and most think of the cemetery as having that name.

Nowadays, Gilpin citizens want to keep the cemetery in good condition. Ray Rears, Gilpin County Planner and Historic Advisory Liaison, explained how the recent restoration was paid for. A fund had been created during the days before Nevadaville’s decline, growing to a total of $3,145. County officials, tired of carrying over the fund as a budget line item, decided to spend the fund on a worthy activity.

Accordingly, Rears and Linda Jones, as a member of the Historic Preservation Advisory Commission, walked the cemetery months ago and identified six headstones that were most in need of repair. The stones had been broken or knocked off of pedestals, possibly due to vandalism. The stones belonged to Susan Rowe, 1879; Mary B. Anderson, 1882; Albert J. Roberts, 1880’s; Thomas Williams, 1905; “Walter”; and “Thomas E.”

Although most descendants no longer visit the sites, some still value and cared for them. Rears reported that a number of the plots in the cemetery were purchased by family members and heirs and will be utilized by them when the time comes.

Last summer, the Gilpin Department of Public Works installed a large boulder at the cemetery, on which a plaque detailing the site was mounted. The plaque explains, “The earliest grave dates to 1865. There are 193 platted 20’ x 20’ blocks with an estimated 600 pioneers buried here, with most graves unmarked.”

Bids for the headstone repair work were accepted. Based on very favorable word-of-mouth recommendations and the best bid, Norman’s Memorials was engaged for the job.

Norman’s, which has been a family business since 1912 and has restored many historic gravestones, sent a crew to repair the headstones last summer. To do the job right, it was necessary to bring the stones to their Greeley office for repair. A special epoxy was used to put the broken pieces together. The stones were then cast in a bed of concrete to keep them intact during transport.

Owner Ron Cobb and employees Nathan Roth, Alan Hobbs, and a young apprentice arrived this past Tuesday to perform the reinstallation. It was a sunny but chilly morning. The crew worked quickly but carefully, before snowflakes began to fall.

They first discovered that some trees would have to come down in order to get their truck close enough to perform repair on the largest headstone. (Back in the 1800’s, the cemetery lanes and pathways were only wide enough for horses, pulleys, and the strong men who were putting the stones in.) The crew went to work with chainsaws, making sure to create a minimal impact. Ray Rears encouraged them. “High winds will knock the trees down and damage the stones anyway,” he noted.

The headstone they needed to get to, belonging to Thomas Williams, had been left at the cemetery and not transported to Greeley. It was intact but had been knocked off its base. The plan was to take the pieces apart, raise the foundation, and level the site with sakrete concrete. The crew would reattach and clean the headstone.

While two crew members removed the trees, the other two worked by hand to reinstall smaller headstones. The gravesites were prepared by removing the old sandstone foundations and clearing out tree roots with hand shovels. The men also used their hands to smooth the dirt and level an area for the restored headstones. The new stones were then pushed into place with a shovel, and the dirt was replaced around the stones and tamped down carefully with work boots.

All of the men have been in the memorial industry for many years and had modest pride in their profession. Working with headstones, particularly historic ones, appealed to them. Alan Hobbs remarked, “Refurbishing historic headstones is not an exact science. It takes patience, and you have to be very careful.” Nathan Roth added that marble is porous and doesn’t wear well; moisture can cause it to deteriorate.

Roth finds his job educational, coming across facts he didn’t know while photographing and cataloging information from the headstones.

“It’s neat that people actually care about these old cemeteries,” he commented. “Historical societies and the families of the people buried get involved in taking care of the sites.”

The healed stones were replaced skillfully, and the final result was pleasing. Those who lived and loved and worked and died in times past would appreciate the care given to their final resting places … as do those who revisit and remember.

END_OF_DOCUMENT_TOKEN_TO_BE_REPLACED

Where the dead get to tell their story By Jaclyn Schrock On Saturday, August 21, the Gilpin Historical Society held their annual Cemetery Crawl. Tickets allowed the shuttle of hundreds of guests from the Teller House parking lot to the Cemetery. Depending on v... END_OF_DOCUMENT_TOKEN_TO_BE_REPLACED

Where the dead get to tell their story By Jaclyn Schrock On Saturday, August 21, the Gilpin Historical Society held their annual Cemetery Crawl. Tickets allowed the shuttle of hundreds of guests from the Teller House parking lot to the Cemetery. Depending on v... END_OF_DOCUMENT_TOKEN_TO_BE_REPLACED