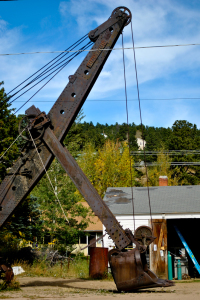 On Wednesday, October 8th, the Nederland Mining Museum began the process of dismantling the bucket from the world famous 1923 Bucyrus Panama Canal 50-B Steam Shovel. The monumental task was performed in preparation to ship the bucket to the internationally renowned Mint Museum Uptown in Charlotte, NC, where the steam shovel bucket will be displayed as part of the museum’s “Connecting the World: The Panama Canal at 100” exhibition. According to the Nederland Mining Museum curator Dan Martin, the bucket will be one of the main attractions for the museum’s anticipated 30,000-40,000 visitors during the exhibition. Martin said he expects the Mint Museum exhibit to receive national coverage from USA Today, the New York Times, and the Wall Street Journal.

The exhibit opens this fall to celebrate the centennial anniversary of the building of the Panama Canal. It will bring together works from printmaker Joseph Pennell, painter Alson Skinner Clark, and painter Jonas Lie. Select works from other artists depicting the canal and its construction will also be displayed. Martin said the Mint Museum is partnering with the US District Export Council on an International Trade Conference to be held in Charlotte. Opening night of the exhibition will include dignitaries such as the US Ambassador to Panama.

The Mining Museum’s Bucyrus Panama Canal 50-B Steam Shovel is the only one of its kind still in existence. Built in 1923, it weighs 130,000 pounds. 534 Bucyrus and Bucyrus-Erie 50-B models were built between 1923 and 1939. Crawler tracks were added to the 50-B model, making it the first heavy duty, 360-degree rotating shovel.

The construction of the fifty-mile long Panama Canal was an engineering and construction marvel of its time. It was also the demise of 5,600 workers between 1904 and 1913, most of whom died due to disease and accidents. France began work on the canal in 1881, but stopped due to engineering issues and the high mortality rate of workers. Some estimates put the French era death toll close to 20,000 workers.

Twenty-five steam shovels, including the local one, were sent to the Panama Canal to build bridges, roads, and drains. The biggest challenge, perhaps, was removing massive amounts of dirt and rock cut from the canal bed. It is estimated that the American excavation efforts removed 38,845,582 cubic yards of dirt and rock.

All of the shovels except the one at the Mining Museum were scrapped at the Panama Canal. The lone survivor was shipped back to California and then brought to Denver. In the early 1950s, the Bucyrus was brought via railway to Rollinsville by Roy and Russell Durand to work their Lump Gulch Placer until 1978.

Steve and Laurel Higgins then donated the Bucyrus to the Nederland Mining Museum. In October of 2005, the steam shovel was moved from Lump Gulch to the Museum. The monumental task of moving the behemoth of metal was documented in the History Channel’s “Mega Movers” that aired in 2006.

The placard on the side of the steam shovel says it best: “This national treasure links a historic engineering achievement, the industrial revolution of the United States, local history of Colorado mining, and good old fashioned hard work by two brothers trying to achieve the American dream.” Now, the steam shovel’s bucket will move yet again to commemorate its beginnings.

END_OF_DOCUMENT_TOKEN_TO_BE_REPLACED

Where the dead get to tell their story By Jaclyn Schrock On Saturday, August 21, the Gilpin Historical Society held their annual Cemetery Crawl. Tickets allowed the shuttle of hundreds of guests from the Teller House parking lot to the Cemetery. Depending on v... END_OF_DOCUMENT_TOKEN_TO_BE_REPLACED

Benefitting the county, schools, and much more By Don Ireland   This year marks the 30th anniversary of casinos opening in the former little mining towns of Black Hawk, Central City and Cripple Creek, Colorado. In those early years, smoking was allowed inside ... END_OF_DOCUMENT_TOKEN_TO_BE_REPLACED