High tea at the Stroehle House 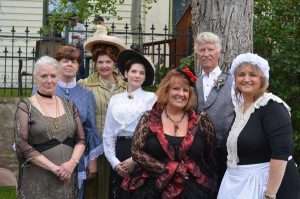 A high tea picnic at the Stroehle House at 231 Chase Street in Black Hawk took its guests back to a slower-paced time. On Saturday, June 11, the historic home was the setting as the Gilpin Historical Society (GHS) served tea and scones with a satisfying dollop of history.

The side lawn was dotted with tables elegantly dressed in white and adorned with sterling silverware and floral-patterned china. The gentle murmur of about two dozen guests from Gilpin County and the metro area blended with the soft clink of china cups on saucers.

Several guests turned out in Victorian period dresses, hats, and button-up boots, accessorized with a parasol. Others wore more contemporary styles, but all got into the spirit of the moment.

Servers in Victorian garb or crisp white blouses and black skirts offered a choice of English black, orange spice, or salted caramel teas. As few of the guests were used to the choreography of formal teas, one smiling server explained, “We pour from the left.”

The purpose of the tea, as well as another tea coming up on September 10, was to celebrate the Stroehles, a leading family of Gilpin and Clear Creek Counties for four generations. They ran mining businesses, served as mayors of Black Hawk, and were well-known musicians and teachers. Their legacy is preserved through their historic home maintained by GHS.

Lolli Hughes, a member of GHS’s Board of Trustees, organized the event and prepared most of the food. A former middle school teacher, Hughes used her “classroom voice” and sprinkled her comments generously with humor.

“This is my first tea. I’m sorry if not everything works perfectly – the circuit breakers went out five times, so we are lucky to have warm tea. And if there is anything you don’t like, I didn’t make it!”

In spite of Hughes’ tongue-in-cheek warning, the presentation was attractive and the food was superb and garnered rave reviews from all the guests. Special speaker Jenny Hankinson even remarked, “I’ve attended teas from the Brown Palace to the Ritz in London, and this is the best of all!”

Hughes acknowledged the servers, without whose help the event would not have been possible. Brenna Schembri, Lee Anna Jonas, Suzanne Matthews, Savannah Weitzel, Deb Wray, and Gary Huffman did a professional job.

Savannah Weitzel, the docent at the Gilpin History Museum, gave a plug for tours of Central City landmarks, including the Thomas House, Opera House, and Teller House. For those interested in the tours, they are from 10:00 a.m. to 5:00 p.m. daily except Monday; the Museum itself closes at 4:00 p.m.

A new feature this year was a small raffle. Some guests won books on Gilpin County history from the Gilpin History Museum, others received GHS Wild Bunch t-shirts or an aromatherapy pack.

Jenny Hankinson, Acting Curator of Collections at the Littleton Museum, brought to life the stories of several women from the late 1800’s, a few of whom had connections to Gilpin County. Hankinson attended Jefferson County schools, completed her undergraduate studies at the University of Denver, and received her master’s degree in anthropology from the University College of London.

She discovered that the history of Littleton seemed to be oriented around the achievements of its founding fathers. She did find information about women’s clothing and household items but was convinced that there was more to the women than the fabric they wore or the items they used for household work.

Hankinson dug deeper and found true tales of love, hardship, innovation, and courage as women moved west during the Victorian era. She listed four main effects that westward expansion had on women.

First, new opportunities, as the mining industry brought women west with their husbands. Along with mining grew support industries, such as farming, building, assay offices, and stores, in which women were involved.

Second, there was further migration as mining didn’t work out for some folks and they went on to settlements on the plains or to cities.

Hankinson summarized the lives of a dozen or so of these outstanding women from Littleton’s history. Those having ties to Gilpin County included Mollie Dorsey Sanford. She married her husband Byron Sanford in Nebraska City, Nebraska, in 1860, and courageously made the eight-week trip by oxen team to Colorado Territory. The journal Mollie kept of this trip and other travels, spanning 1857-1866, is considered one of the best and most readable journals of the period.

In 1861, Byron Sanford was commissioned as a second lieutenant of Company H, First Colorado Volunteers, by Territorial Governor William Gilpin. Sanford recruited a company of men at Central City and marched to Camp Weld in Denver.

In 1864, the Sanfords homesteaded along the Platte River. Byron worked at the Denver Mint for the next 40 years, and Mollie was a homemaker and raised the couple’s two children. Son Albert served as assistant curator for the Colorado State Historical Society. Daughter Dora had a son to whom Mollie Sanford willed her diary, and he saw to its publication.

Clark and Julia’s daughter Jessie was named valedictorian of Littleton’s first graduating class of about eight pupils. Her father became Littleton’s postmaster in 1906; when his health failed, Jessie’s sister Ruby was put in charge of the office, and then Jessie was appointed postmistress in 1908 and served until 1912. She married William Shellabarger later that year. Jessie was named Littleton Foremost Mother in May 1944. She was cited for her volunteer work at the Littleton Service Men’s Center during World War II and for writing hundreds of cards to bring comfort to the mothers and wives of soldiers.

Other women of Littleton’s history distinguished themselves as dedicated teachers, talented writers, and dairy farm operators.

The Littleton’s Women’s Club was founded in 1897 to improve the community and was instrumental in getting the first library started. The Mothers’ Congress (forerunner of the PTA) worked to bring nurses and hot lunches to schools in 1910.

Hankinson brought history in touch with contemporary times as she spoke of Ellie Greenberg, a founding member of the Littleton Council of Human Relations, who brought Martin Luther King, Jr. to speak in the 1960’s; Sally Parsons, who was Littleton’s first woman mayor from 1977-79; artist Rita Derjue; business owners Vanessa Menke and Lisa Schomp; and more.

Hankinson looked to the future by relating it to her four starting points.

“First, technology is the new opportunity. Second, there is migration as people move to Colorado from other states. Littleton was recently named the second best small city in America,” Hankinson reported. “Third, housing is booming as people settle in new homes and demand more housing and schools. Fourth, stability is growing as women are doing amazing things and getting involved in keeping the city going.”

Giving to one’s community is important. The Stroehle family of Gilpin certainly did that, and it is something that the women of both old-time and modern-day Littleton and Gilpin County would know very well.

Check out the histories and happenings of Gilpin County and Littleton on the websites gilpinhistory.org and littletongov.org.

END_OF_DOCUMENT_TOKEN_TO_BE_REPLACED

Benefitting the county, schools, and much more By Don Ireland   This year marks the 30th anniversary of casinos opening in the former little mining towns of Black Hawk, Central City and Cripple Creek, Colorado. In those early years, smoking was allowed inside ... END_OF_DOCUMENT_TOKEN_TO_BE_REPLACED

Benefitting the county, schools, and much more By Don Ireland   This year marks the 30th anniversary of casinos opening in the former little mining towns of Black Hawk, Central City and Cripple Creek, Colorado. In those early years, smoking was allowed inside ... END_OF_DOCUMENT_TOKEN_TO_BE_REPLACED