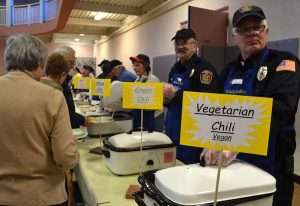 A crowd of about 300 gathered for chili beans and bargains at the High Country Auxiliary’s (HCA) annual fund-raising dinner and silent auction on Saturday evening, March 7. For the third year, the event was held at the Gilpin Community Center to benefit firefighters from the Timberline Fire Protection District (TFPD) and GCART, the Gilpin County Animal Response Team.

Starting at 5 o’clock, HCA and GCART volunteers busily dished up the traditional mouthwatering fare to a line of eager diners: red, green, white (chicken), and vegetarian chili with toppings, coleslaw, cornbread, tortillas, beverages, and dessert. After the meal, folks browsed and made bids on the hundreds of goods and services offered.

The dinner and auction is generally HCA’s best attended fund-raising event of the year; 2014’s event raised $7,000. In the past few years, the group has used funds to purchase infrared cameras, pressure valves for fire trucks, gas detectors, and ATVs for the firefighters’ rescue work. This year’s projects haven’t yet been decided, but possibilities include equipment for CPR classes and luncheons for Firefighter One training. HCA member Diane Rittenhouse said, “We’re waiting for requests.”

Forty volunteers had prepared for the evening for the past several months. Kay Johnson organized the dinner, while Rittenhouse coordinated the auction. Many jobs needed to be done, including preparing and serving food, setting up tables and cleaning up after, collecting auction items, cataloging donations, preparing bid sheets, cashiering, and auction tallying. TFPD firefighters pitched in with heavy lifting duties.

TFPD’s acting chief, Chris Schimanskey, welcomed the throngs and thanked all the HCA members for their hours of service.

“There’s plenty of food and great deals, so spend lots of money!” he encouraged. Schimanskey advised that all the organizations were looking for more volunteers, adding that TFPD would be holding an open house on March 21 from 2:00 to 4:00 p.m. at Station 3 (660 Highway 46). Volunteer applications will be accepted at that time.

Rittenhouse said 350 items were donated, along with 90 gift certificates – the most donations ever. The estate of Elaine Schoelzel was one of the many generous donors; Schoelzel had lived in Lump Gulch since 1976 and passed away recently. A retired physician, she was active in the Gilpin community, especially with the county library and St. James United Methodist Church.

“She was at the chili dinner last year in her wheelchair,” recalled HCA treasurer Wanda Sundquist. “She and Betsy Beaver were very generous to the Auxiliary and donated lots of small, fun things.” Sundquist had received the items from the estate and prepared them for the auction.

Many of the attendees look forward to this gathering year after year, just as they do the Gilpin County Fair; it’s a place to catch up with folks you haven’t seen in a while and a good time to make new friends.

The Auxiliary is always pleased to welcome newcomers, also. Crystal Ganz and her three young daughters attended the auction for the first time. “The meal was very delicious, and the auction is exciting,” she commented. Her girls had their eyes on a doll house donated by the Schoelzel estate.

“No pushing or shoving … this isn’t Black Friday. Step away from the items!” she intoned with a laugh.

Volunteers gathered the bidding sheets together. In about a half hour, the winners were tallied, and Katie Schimanskey announced the winners.

“I heard some cheers!” she proclaimed as she called the numbers.

Satisfied folks gathered to pay for and collect their items. Not everyone stayed to claim their goods or services, though. Those not present would get a phone call to arrange to come pay for and retrieve their winnings later. Any items that were not bid on will be presented at the county flea market in June or at next year’s auction.

Rittenhouse concluded the evening with heartfelt gratitude. “We can’t thank you enough for supporting us!”

The High Country Auxiliary is an independent all-volunteer organization that provides meals and gear to the emergency organizations. The group uses money it raises to feed emergency responders on scene and during trainings and also uses funds to buy equipment and gear those workers need. Besides the dinner and auction, other events they will work on this year include Gilpin’s flea market in June and the County Fair pancake breakfast in August.

GCART assists firefighters in evacuation of animals in case of wild fires, among many other services.

END_OF_DOCUMENT_TOKEN_TO_BE_REPLACED

Where the dead get to tell their story By Jaclyn Schrock On Saturday, August 21, the Gilpin Historical Society held their annual Cemetery Crawl. Tickets allowed the shuttle of hundreds of guests from the Teller House parking lot to the Cemetery. Depending on v... END_OF_DOCUMENT_TOKEN_TO_BE_REPLACED