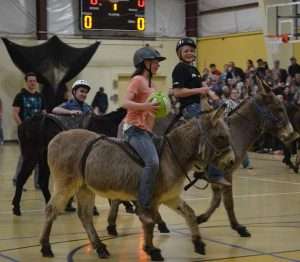 Donkeys are well known for being work animals – for being used for transportation and for carrying goods. Sometimes, though, they get to have a little fun. That was the case on Wednesday evening, April 18, when eight of them visited Gilpin County School for an entertaining “Donkey Basketball” fundraiser to solicit donations for the eighth and twelfth grade classes. A pulled pork dinner kicked off the evening, and the games followed in the school’s old gym.

$305 was made from the dinner, and ticket sales netted $630. A 50-50 raffle was also held, collecting $350. Sean McCoy won the raffle and got half of the proceeds, while the other half went to the middle school.

Donkey basketball has been around for ages and is popular with schools as a fundraiser. This was the third time for the event at Gilpin. Diane Stundon organized the competition. She had previously coordinated donkey basketball when her son Justin was in sixth grade in 2011, so his class could start saving for their senior trip. The event was held again in 2014. Justin is now a senior, and Stundon’s daughter Haley is in eighth grade, so Stundon figured it was time to do it again.

The donkeys were provided by Donkey Sports, Inc. (DSI), from Entiat, Washington. They furnished the donkeys, game equipment, referees, protective head gear for the players, game rules that ensured humane treatment of the donkeys, and valid livestock health certificates and brand inspections. The donkeys wore rubber shoes so as not to harm the floor.

Bruce Wick, the donkeys’ owner from DSI, was unable to be there, so his daughter Bailey brought the donkeys and refereed the games, along with a helper.

“We do games five nights a week,” Bailey Wick advised. “We go from January to mid-May.”

A question people often ask is, “What if nature calls?” The donkeys are not house trained, and their food and water are not withheld, so sometimes poop does happen. If so, the rider gets off and the floor gets cleaned up and then disinfected after the games. (Thankfully, there were no “accidents” during the Gilpin games.)

The game rules were simple. Each team had five players, four mounted on donkeys. The two un-mounted players had to stay at center court. The only time they could leave was when the other team scored. At that time, they could throw the ball to a mounted teammate.

Riders mounted any which way they could and were required to stay on the donkeys while passing or shooting the ball. Players could get off their donkeys to retrieve a ball, but their donkeys had to go with them. The infamous donkey reputation for stubbornness came into play here. “Heck, no. We won’t go.”

Each game had two 5-minute halves, with no timeouts. There were two regular games, a consolation game, and a championship game. Gilpin senior Carly Johnson was the announcer, and senior Katelyn Armstrong was the clock keeper.

Audience members anticipated lots of laughs, and they were not disappointed. The first lively game was Seniors vs. Teachers. The donkeys trotted briskly down the court, their riders laughingly trying to pass and shoot. The Teachers scored first, but the Seniors tied it up at 2-2. It was still a tie when the clock ran out, so the game went into overtime. The Teachers were the first team to score in two minutes, so they won 4-2.

Seniors Aspen Nadeau and Cicely Lepro summarized the ride in one word: “Terrifying!” Apparently it was the first time they had ridden, and from the saddle, the gym floor looked pretty far away.

4H and Central City Fire Rescue/ Colorado State Patrol battled next. Neither team scored during the first half, but the first responders put one in during the second period. The final score was 2-0 CCFR/CSP.

A ten-minute break enabled folks to come pet the donkeys. The gentle animals soon had a crowd of admirers stroking their ears and giving them lovin.’

The Seniors and 4H/CCFR met for the consolation round, which was won 6-0 by 4H/CCFR.

The players and crowd got fired up for the thrilling championship game between the Teachers and the Highway Patrol. Competition was fierce. At first, it looked like the game might go to the troopers. But the Teachers rallied and brought it to a tie ball game at 6-6. The Teachers scored twice more, surging ahead 10-6. HP managed one more basket, but the Teachers marshalled their efforts at the buzzer, and the final score was 12-8 Teachers.

The champs were gracious winners.

“It was not hard. The donkeys just do what they want to do, said Teacher Randi Ebers.

Topher Rouse noted, “It was awesome to win! But the donkeys never went where we wanted them to.”

END_OF_DOCUMENT_TOKEN_TO_BE_REPLACED

Benefitting the county, schools, and much more By Don Ireland   This year marks the 30th anniversary of casinos opening in the former little mining towns of Black Hawk, Central City and Cripple Creek, Colorado. In those early years, smoking was allowed inside ... END_OF_DOCUMENT_TOKEN_TO_BE_REPLACED