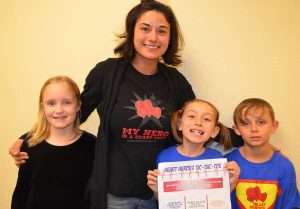 The Gilpin County Board of Education met on Tuesday, February 16. Only two of the five members, Craig Holmes and Charlotte Taylor, were present at 7:00 p.m., which meant there was no quorum to begin the meeting. However, there was a roomful of families attending for several student presentations. Board President Holmes unofficially began the meeting with the presentations, so that the families didn’t have to be kept waiting.

Superintendent David MacKenzie, Elementary Principal Scott Eldred, Secondary Principal Alexis Donaldson, and Secretary to the Board Gretchen Sechler were present. The other board members, Brook Ramsey, Kersten Armstrong, and Steve Boulter, had commitments with the home high school basketball games taking place in the gym and arrived as those concluded.

Armstrong arrived at 7:13 p.m., making a quorum. The meeting was called to order, and the presentations resumed.

Third grade teacher Kellie Bayne and two of her students gave a science presentation. Their class has been studying the life cycles of animals and how they adapt to changes in their environment in order to survive. The project incorporates elements of science, technology, writing, and research.

Their findings were entered on the students’ own websites, under the umbrella of Gilpin County School’s site, gilpin.k12.co.us. Bayne explained that the sites were not ready to “go live” – they are just in the editing process.

“Gavin” was the first student to report to the Board and members of the public present. He had selected his favorite raptor, the Red Tailed hawk, to tell about. He advised of several fascinating facts.

Dannika Sternlicht presented her research on the fox. “Foxes can adjust to any new lifestyle,” she said. Dannika navigated her website menu items: fun facts, adaptation, and life cycle.

Bayne said Golden Gate Canyon State Park personnel had come to the school as part of an effort to enter into a co-op relationship with educators. Bayne and Golden Gate’s Visitor Center Supervisor Megan Barton had met regarding setting up an activity for later in the spring.

Jennifer Turkaly, who teaches first through third grade Montessori, introduced the next presentation. She had asked her students which of them had ever been in the hospital. A few of the students had had the experience of being patients. One in particular, Lola Keller, was present that evening with her family to educate the board about her illness, congenital heart disease, or CHD. February is Congenital Heart Month. In conjunction with that, the elementary classes have been hearing Lola’s story and learning about CHD.

Lola’s mother Margaret, brother Roland, and friend Adele were with her at the meeting to explain what was wrong with her heart at birth, how a normal heart worked, and how Lola’s heart was repaired through open-heart surgery. They also filled the audience in about CHD facts.

Margaret Keller is a member of the organization “Heart Heroes,” a charity that provides support to children and families affected by CHD. The group’s main program is distribution of superhero capes to kids suffering from CHD. They also hold superhero heart runs across the country. Keller stated that regretfully there is not enough funding available to support research. Many children die in spite of treatment.

“CHD is the most common birth defect worldwide,” she advised. Keller related that there is no known prevention or cure. Lola will always need medical care and has had procedures in addition to her initial surgery.

Keller said the family had obtained proclamations from Colorado state government and from Black Hawk for Congenital Heart Disease Awareness Week. She appreciated the support of local government.

The Kellers also distributed a “Heart Heroes Tic-Tac-Toe” game to the board and public to test how well they remembered the facts they had just learned. Lola, Roland, and Adele noted that their classmates had also played the game and had done well.

Artist of the Month

Kaja Cole, age 12, was the school district’s artist for February. She attended the meeting with art teacher Curt Halsted to display her anamorphic illusion drawing. The drawing was the result of an assignment on optical illusions.

“She did an excellent job, and I am encouraging her to continue in art,” Halsted said.

This reporter noted that she had been having difficulty accessing the school’s website or portions of the site. MacKenzie commented that several parents had voiced issues as well. Part of the problem was caused by recent power outages, but the exact cause of all difficulties is unknown. The school will be upgrading to a better version of Word Press, which will be accessible on mobile devices.

“It will be friendlier and have fewer ‘gremlins,’” MacKenzie said.

The upgrade is still a few weeks away.

The board approved the Business Manager’s Report, check vouchers, and financial statement for January 2016. Business Manager Terry Scharg reported that the Colorado Department of Education (CDE) is in the process of distributing an additional $5 million in at-risk funding to districts. Gilpin’s share of the funding is $l,712. These funds are to be used for at-risk expenditures. She also said that based on total state funding needs and Gilpin’s October student count, the district is looking at a reduction of approximately $17,000 in state share funding.

The board approved policies on second reading regarding donation leave, which pertains to co-workers donating a portion of their accrued medical leave to a fellow employee who has exhausted employee leave benefits.

The board also approved the hire/contract for Crystal Zeilbeck, elementary tutor.

Secondary Principal Donaldson said the high school financial literacy students did well in the recent Junior Stock Exchange competition. Wrestlers competed in regionals at Sterling over the past weekend, which wraps up their season. Basketball teams are wrapping up their regular season and looking forward to post-season play. The Booster Club had put on successful middle school and high school dances. Four students attended the Mile High League Leadership Summit.

Elementary Principal Eldred advised that teachers and students are working on PARCC test practice sessions. Last month, five teachers participated in a conference focusing on reading strategies; they have been implementing the strategies and are noticing positive results. Montessori students participated in collecting and delivering canned goods to a local food bank. Eldred praised the school’s technology team for their work in helping teachers to get their computers back up and running after recent power outages. The PTA hosted an ice cream social and generously supported the past month’s SOAR awards.

Superintendent MacKenzie and the principals continue to focus on instructional initiatives with staff members. Vicki Ferrari of the University of Colorado had visited elementary classrooms to coach the teachers on formative assessment. Rebecca Odegard-Siegele of Mt. Evans BOCES was working to put together a presentation on student data. John Penn, the CDE Executive Director of Field Services, came to observe classes and noted progress. MacKenzie felt confident that students are ready for online state assessment testing. Elementary window replacement and upgrade on the west end will begin in May. More parents are using the point of sale Infinite Campus electronic fee payment and account balance feature on the school’s website.

The district has been using A+ Online Learning Courses Server, but that company has been sold and will no longer support online servers. MacKenzie will be looking into possible different providers.

The Internet Use Agreement will be reviewed, especially to ensure that the district is in compliance with Internet safety requirements

Board members have been provided with school Chromebooks to use for board business. In coming meetings, meeting documents will be sent electronically to board members rather than having them photocopied, in order to save paper. MacKenzie asked the board to be aware that whatever goes on school equipment becomes part of public record and added that the board’s use of Chromebooks will exemplify what the students are doing.

The board took a brief recess at 8:07 p.m. and went into executive session afterward regarding contract negotiations and personnel matters.

The next regular meeting will be on Tuesday, March 15, at 7:00 p.m. The March 1 meeting is canceled.

END_OF_DOCUMENT_TOKEN_TO_BE_REPLACED

Where the dead get to tell their story By Jaclyn Schrock On Saturday, August 21, the Gilpin Historical Society held their annual Cemetery Crawl. Tickets allowed the shuttle of hundreds of guests from the Teller House parking lot to the Cemetery. Depending on v... END_OF_DOCUMENT_TOKEN_TO_BE_REPLACED