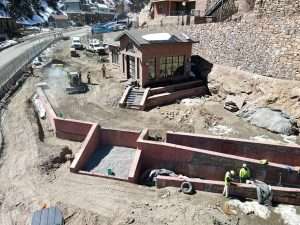 The City Council approved a motion to recess into Executive Session to hold a conference with the City’s Attorney to receive legal advice on specific legal questions, pursuant to C.R.S. § 24-6- 402(4)(b), and to determine positions relative to matters that may be subject to negotiations, develop a strategy for negotiations, and/or instruct negotiators, pursuant to C.R.S. § 24-6- 402(4)(e).

Black Hawk City Council approved the meeting minutes from the March 17, 2021 Special Meeting with no corrections or amendments.

Black Hawk City Council approved amending the City’s Liquor code through the passage of Council Bill 7. Articles 2, 3, and 4 of Chapter 6 in the Municipal Code were amended to provide clarity and further information to individuals seeking a liquor license in the City and to update the Liquor Code in preparation for proposed distilleries located within the City limits

The City is currently reviewing an application to develop individual lots in the designated Miners Mesa subdivision to include an airstream lodging park and distillery. The City currently lacks sanitary sewer service in or accessible from the Miner’s Mesa subdivision to the Black Hawk/ Central City Sanitation District, which hinders development of the property. As a result, the City has partnered with the Black Hawk/ Central City Sanitation District to construct a sewer line from Bobtail Road, extending within the right of way of Miners Mesa Road to the Mesa to support the proposed development and future development. The new sewer line will also benefit the Lake Gulch Whiskey Resort Planned Unit Development should they elect to connect to the sewer line. The City will split the project’s construction cost with the District, with the City paying approximately $1,079,885 and the District contributing $900,000. After final acceptance of the new sewer line, the line will be conveyed to the District. The District will charge all connection, tap, user, and other fees. This project will only include gravity flow sewer lines without any lift stations or other mechanical assistance. A cost recovery plan is outlined in the agreement. If an owner of property within the Lake Gulch Whiskey Resort Planned Unit Development requests a connection to the sewer line, they will pay an amount equal to ¼ of the total project cost, with the City receiving 55 percent and the District receiving 45 percent of the reimbursement. Black Hawk City Council approved Ordinance 2021-08

On March 3, 2021, the City of Black Hawk received an application request for a Certificate of Architectural Compatibility (COAC) from the Black Hawk City Manager, Stephen Cole. The request involves reviewing the Gregory Street Comprehensive Sign Plan (CSP) for properties located along Gregory Street, including Gregory Point, Gregory Plaza, and City-owned properties east of the Plaza up to and including the future commercial building at 221 Gregory Street. The Gregory Street CSP does not include the St. Charles Carriage House parking structure, which has an existing Standard Sign Plan approved on August 31, 2018. Refer to Figure 1. The Gregory Street Comprehensive Sign Plan establishes requirements for all signs within the Gregory Street HARD District. It shall be used as a reference, along with building and zoning codes, for all business developments in the District. This will encourage a distinct identity for Gregory Street and the HARD District through uniform materials, colors, and styles reflecting the small-town mining community that makes the City of Black Hawk unique. The Gregory Street CSP outlines pedestrian level signage that includes way-finding and shuttle-stop signs (freestanding pole signs), building (wall) signs, blade signs, window and door signs, and sandwich (ground) signs. These signs have been determined for the buildings and areas of Gregory Street currently under construction and will require signage once construction is complete. The plan is designed to be easily updated as needed to allow for future signage within the Gregory Street HARD District and may be reviewed administratively or may require City Council review depending on the amount/extent of signage change desired in the future. The submittal includes 28 signs with a total of 272.88 square feet. The properties’ combined allowed sign area is 3,974.4 square feet, based on current regulatory calculations/allowances in the existing sign code. Black Hawk City Council approved Resolution 14-2021.

On February 7, 2021, the City of Black Hawk received an application request for a Parking Variance from Dalton Horan of Ventana Capital, Inc. and Jason Krall of Rick Engineering on behalf of the property owner Club Vista Properties II, LLC. The request is to allow the reduction of required parking spaces for the proposed Hawk’s Landing Airstream RV campground planned for Lot 1, Block 1, Miners Mesa Subdivision Filing No. 4 (currently existing subdivision. The proposed campground includes 50 permanently installed Airstream trailers available for nightly rental, a check-in office, and an Airstream bar with outdoor seating. The campground will be located on the western portion of the property known as Lot 1, Black Hawk Park. The Black Hawk Park subdivision plat was presented to the Black Hawk City Council for review on February 24, 2021. Details of the Subdivision Improvement Agreement for Black Hawk Park are being finalized with the intention that the plat may be approved at the March 17, 2021, Black Hawk City Council meeting with needed completion of the land owners’ signature in advance of the Agreement. In addition, the Hawk’s Landing Site Development Plan (SDP) and Certificate of Architectural Compatibility (COAC) are planned for hearing before the Black Hawk City Council on March 17, 2021 (Continued to March 24, 2021). Approval of the SDP/COAC is conditioned upon either increasing the proposed parking to meet the Zoning Code regulations or obtaining a variance to the Zoning Code regulations to reduce the required parking for the development.

The City of Black Hawk has received an application from Dalton Horan of Ventana Capital, Inc and Jason Krall of Rick Engineering on behalf of the property owner Club Vista Properties II, LLC, requesting review and approval of a Preliminary Plat and a Final Plat for the Black Hawk Park subdivision. The applicants request the subdivision of Lot 1, Block 1, Miners Mesa Subdivision Filing No. 4 into nine (9) commercial lots and one (1) tract for the purpose of developing the property with an Airstream RV Campground, a distillery, and other commercial uses. Refer to the Staff Report included with this Request for Council Action originally provided at the February 10, 2021, City Council agenda. As a reminder, the City Council opened and closed the public hearing on February 10 and did not make a decision to approve or deny, but continued the decision to the February 24, 2021 meeting, and then to the March 17, 2021 agenda, and finally to this March 24, 2021 agenda. The reason for no decision was that a Subdivision and Development Agreement was not yet signed on those dates. As of this updated Request for Council Action – a signature is still not yet provided on the Agreement, but the staff is hopeful such Agreement, and a signature is provided by March 24, 2021. Also, since February 10, 2021, staff has coordinated with the applicant to add a new note relating to the conveyance of Lots 4, 5, and 6 to the City of Black Hawk. Black Hawk City Council passed a motion to conditionally approve Resolution 8-2021, pending the need for additional signatures on the document.

On behalf of the property owner (Club Vista Properties II, LLC), Dalton Horan of Ventana Capital Inc. and Jason Krall of Rick Engineering, an application for the review and approval of a Site Development Plan and Certificate of Architectural Compatibility for the Hawk’s Landing Airstream campground proposed at 990 Miners Mesa Road. The proposed development includes 50 permanent Airstream trailers, a check-in building, a storage shed, an Airstream bar, and associated campsite amenities. Baseline staff presented this item, and the public hearing was opened and closed at the March 17, 2021, City Council meeting. That presentation included a number of required revisions to the SDP/COAC plans and reports. A complete second submittal (including required revisions) is expected from the applicant on March 19, 2021. Once received, staff will evaluate the submittal and provide an update to City Council if any additional conditions are warranted. Included herein are some new renderings from the applicant that better portray the proposed development. Black Hawk City Council approved Resolution 9-2021.

Black Hawk City Council also approved a Resolution Approving the agreement regarding cost sharing for water and sanitary sewer line construction between the City of Black Hawk and the Andrianakos Limited Liability Company. Andrianakos Limited Liability Company agrees to pay a portion of the construction costs of a new waterline from Bobtail Road to a connection point adjacent to the property owned by Andrianakos not to exceed $366,492, in exchange for the City of Black Hawk agreeing to provide a 4-inch water tap or four (4) 2-inch water taps for the future development of the property.

Police Officer Edgar Espinosa has been working for the city of Black Hawk for approximately six years. He started working with the Public Works Department in 2015 as a street maintenance worker. In 2019 he spoke with City Manager Steve Cole about his interest in applying with the City of Black Hawk Police Department. Mr. Cole encouraged him to apply. According to Mr. Espinosa, “Everyone in the city was incredibly supportive of my decision to become a part of the Black Hawk Police Department. In January of 2020, I was enrolled in the Jefferson County Sheriff’s Office and the Lakewood PD Combined Regional Academy. On July 10th 2020 I graduated the academy and completed one of the most difficult but satisfying tasks I have ever embarked on.”

Police Officer Ryan Johnson is a Colorado native, born in Brighton, Co. He grew up in Brighton, Commerce City, and Thornton area, with most of his child hood years in Thornton. As an adult, Mr Johnson lived in Northglenn for 12 years, Arvada for 5, and currently resides back in Brighton. His law enforcement career started in 2007 with the Black Hawk Police Department after graduating the police academy at the Community College of Aurora. While in Black Hawk he had the privilege of training in many different disciplines, becoming a sergeant, being a member of the Black Hawk Crime Scene Unit and Black Hawk Special Services Unit; of which he was a part of from 2011 through 2018. He left Black Hawk in 2018 for Brighton Police Department to try his hand at working in the Denver metro area. While he enjoyed his time there, he missed working for Black Hawk. Mr. Johnson decided to apply and was very happy to accept a position here in July of 2020.

The next Black Hawk City Council regular meeting is scheduled to be held on April 14, 2021 at 3:00 pm online. For more information visit www.cityofblackhawk.org.

END_OF_DOCUMENT_TOKEN_TO_BE_REPLACED

Where the dead get to tell their story By Jaclyn Schrock On Saturday, August 21, the Gilpin Historical Society held their annual Cemetery Crawl. Tickets allowed the shuttle of hundreds of guests from the Teller House parking lot to the Cemetery. Depending on v... END_OF_DOCUMENT_TOKEN_TO_BE_REPLACED

Where the dead get to tell their story By Jaclyn Schrock On Saturday, August 21, the Gilpin Historical Society held their annual Cemetery Crawl. Tickets allowed the shuttle of hundreds of guests from the Teller House parking lot to the Cemetery. Depending on v... END_OF_DOCUMENT_TOKEN_TO_BE_REPLACED