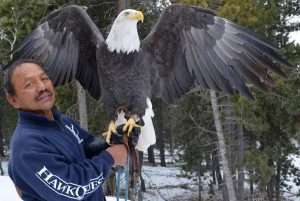 At Christ the King Community Church

The more than 40 folks of all ages who came to HawkQuest Saturday, November 17 at Christ the King Community Church, came away with a deeper understanding of the birds of prey in Colorado. The HawkQuest presentation helped us realize the things we can do to preserve the amazingly well equipped birds’ habitat which included being respectful of the environment we share, along with simply picking up trash. We were reminded that in creation, God asked the people to take care of the animals.

Watching the wild birds’ movements, and characteristics, as well as physical traits can barely be explained, compared to what it is like to see the Harris’s hawk silently descending from the balcony, with only three pumps of his wings to glide to a landing when he hears the signal and sees the body position that calls him to leave his perch on one caring volunteer to fly to master falconer Zin Quitugua. The tail spread wide open upon landing revealed a large horizontal stripe which is not visible when the tail is closed.

When the program began, we learned about HawkQuest’s history and the training and testing it took to become a master falconer. HawkQuest began in 1986 after a two year study centered on the red-tailed hawk. A visit to a 4th grade classroom with a live bird revealed the intrigue of youth to know more about birds of prey. The facility in Parker, Colorado now has 40 birds normally, requiring an annual budget of $40,000. Breeding, imprinting, captive care of wild species, rehabilitation for injured birds and educational outreach was the initial motivation of the facility.

Presenter, Zin Quitugua, founder of HawkQuest, spoke with eloquence and humor about the history of each bird and comparisons between the species who traveled from Parker to Black Hawk. First presented was the Harris’s hawk perched on volunteer Emily Gibson. Next we met the great horned owl, perched on volunteer Leona Campbell. The owl was returned to a cage so that the Ms. Campbell could present the peregrine falcon. The last bird was their bald eagle, with volunteer Dionne Meideinger. Volunteer opportunities for training and weekly commitment specifics are available through the website HawkQuest.org.

The Harris’s Hawk presented was a 4 year old male, bred in Colorado and with no experience living in the wild. He is considered an imprinted bird. Imprinting was explained to recognize that birds normally attach to their parents who feed them. Imprinting means they accept food from people, rather than the parent, so have a different relationship with people than the wild birds.

Although most hawks do hunt alone, the Harris’s hawk is unique to be dependent on a female dominated social system for hunting. A matriarch hunting territory is maintained by all the hawks in each group. They are mostly desert dwellers and are found in South and Central America, reaching northern boundaries in Arizona, New Mexico and Texas. The youngest female will perch on the top of a cactus, with each elder female on top of her in order so the matriarch is on top to spot a rabbit. With a special sound and twitch of her tail, she tells them where and when to get the food. The group works together to protect larger food supplies, and will take turns eating the downed prey.

The great horned owl presented was a female and came injured to HawkQuest, representing the largest species of owl in Colorado. As an adult bird, she was injured by a vehicle. She was recovered with a broken wing, so has a pin in the wing to hold it closer to her body rather than just hanging down limp. She has been with HawkQuest nine years. Great horned owls can live 10 years in the wild, but up to 25 years in captivity.

Although many owls do hunt at night, there are many that hunt in the day also. A demonstration to contrast the sound of an eagle feather compared to owl feathers stroking the air left only a sound heard from the eagle feather – no sound was heard with the owl feathers. Her silent hunting techniques and uniquely designed body parts were demonstrated. Great horned owls are known as the tiger owl, or hoot owl.

We learned the differences in color, size, feet, wings, eyes and beaks by comparison of the Harris’s hawk and the great horned owl. These are both designed for maximum benefits in camouflage and hunting practices. Volunteers held up the silhouettes of three types of wings:

–Buteo – These soaring hawks have long, broad wings and wide, fanned tails. Buteos are built to glide effortlessly on air currents. They can soar for long stretches without flapping their wings. Their soaring ability lets them hunt for prey while circling over open areas. They will perch on trees and utility poles and wait for unsuspecting prey to move below.

–Accipiters – With short, round wings, and long, rudder-like tails, accipiters are agile forest hawks. These birds, which are adept at maneuvering in thick woods, dart through trees, hunting birds on the wing.

–Falcon – Falcons, the fastest birds of prey, are built for speed with streamlined bodies and long, pointed wings. Falcons most often flap continuously while in flight. The peregrine falcon can dive at speeds of over 150 miles per hour. Falcons often hunt other birds on the wing.

The peregrine falcon presented was a one year old female, captive bred in Colorado, so was also an imprinted bird to remain in captivity. A dark back, greyish wings, white underbody and a white tear drop under the eye, a hooked beak and strong talons distinguish the peregrine falcon. The wings are at least three feet wide for a bird less than 21 inches long. Males are smaller than females who weigh about two pounds. The life span is about 7-15 years, They mate for life after the male demonstrates his flying skills for about a month. Nests are in high places, and may be on man-made structures, where starlings and pigeons can be found to feed their young. They are found throughout North America and are more abundant along the coastal areas.

Also known as the duck hawk, the peregrine falcon can capture a Canada goose weighing 6-14 pounds and only able to fly 70 miles per hour. Peregrine falcons are the fastest flying creature on the planet, able to dive over 200 miles per hour to catch their prey in mid-air.

The regal bald eagle presented was an imprinted female weighing 11 pounds with a 6 foot wing span. Her nest that also held her younger brother became abandoned when her father was shot and her mother had to leave to search for food. While her mother was gone, a big wind blew the babies from the nest. This female eaglet had about half her feathers growing, while her younger brother had far fewer feathers. As the wind took them from the nest, the female was able to glide down to the ground, while her brother broke both his wings and his back. Ten days after the trauma, she was recovered nearly starved to death near Sequim, Washington. She was kept hooded much of the time with us, so that she would not try to hunt or seek out food during the presentation. Even though she accepts her food from humans now, she is not a friend to the other raptures in her home.

These brief details are meager compared to the entertaining education available from enjoying the presentation with these amazing birds of prey. Thanks to HawkQuest for caring for these amazing raptors when they can no longer live in the wild.