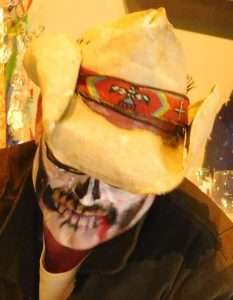 For several years, Central City and the Business Improvement District have put on a walking tour of historic places accompanied by disturbing stories from the past called Creepy Crawl. The Creepy Crawl takes people through the Teller House, Washington Hall, the Williams Stables, the Opera House, and other buildings which add to the ambiance of a good ghost story. Volunteers dress up according to the period of their story and tell the tales of shadowy figures, visitations from the dead, voices in the night, and noises that do not or should not happen. The event is often accompanied by a free microbrew (or root beer and cream soda for the lesser aged patrons) at the end of the tour to heighten the “spirits.”

Problems in the eleventh hour

This year’s event seems to have conjured up more than just tales. One of the buildings used as a backdrop to a story had to be discarded due unforeseen problems. The generosity of Mary Bell saved the day as she opened her studio for use during the first night. One of the actors called the day before first night to say he had something come up and could not make it. Stu Wyatt gallantly stepped up to fill the role having never seen the script until that night. Although coordinators Deb Wray and Mike Keeler did not go into specifics, they encountered other ghoulish problems as the event approached. Whether it was due to good spirits, angelic intervention, or just the luck of the Cornish, the Creepy Crawl opened Friday, October 16, as scheduled and was able to deliver an enjoyable experience.

Tourists first stopped at the Teller House for a tale of double murder in Gilpin. Mike Keeler told the story of a man who shot his daughter and wife before turning the gun on himself. The kicker is that he failed in his last two shootings and survived to see his wife die a slow and painful death due to complications from the gunshot.

The second stop began under the eaves of the Opera House doors. Chuck Roberts met the group outside and lit a stick of dynamite (the fuse was very real, the dynamite was not), dropped it in a bucket and asked everyone to follow him…quickly. Inside, he told the story of the figure in black. The figure in black is seen before a disaster strikes and is said to ring a bell to herald doom.

After the Opera House, the group sauntered across the street to Washington Hall and was greeted by Barb Thielemann dressed to the nines as a woman from the late 1800’s. Although she did not tell any tales, her silent repose in the back of the room harkened to stories of souls returned to human form for a temporary, sometimes sinister, purpose. Dave Wacker walked out of the gallery’s mine room dragging a sledge hammer behind him and regaled the group with a story of a man the mafia threw down a mine shaft, never to be seen from again.

The short trot down the street to the Williams Stables was next on the tour. Nicki Lee recalled the story of lady in black who consistently visited the grave of her alleged lover; many years after she herself died. There was something a little off about the way Nicki played her part and it wasn’t until the end that we realized she was repeating what the voices told her in her head.

For the final stop, Stu Wyatt, complete with skeletal Dia de Muertos makeup and cowboy hat, told of the haunting of the Gilpin Hotel. As a last minute stand-in, Stu used his notes to tell the story, but did so convincingly and humorously.

Having been on more than one Creepy Crawl, this year had some ghostly issues. However, the group I was in thoroughly enjoyed the experience. They did not get to experience the creepy kids in black that silently join the group as they walk through the town. Ricky Richards, although not technically part of the Creepy Crawl, enjoys donning a costume with makeup and scaring people along Main Street. He was delayed the first night, and so my group did not see him. I will let the expressions of the group reflect the success of this year’s Creepy Crawl. “It was very enjoyable and worth every penny.”

END_OF_DOCUMENT_TOKEN_TO_BE_REPLACED

Where the dead get to tell their story By Jaclyn Schrock On Saturday, August 21, the Gilpin Historical Society held their annual Cemetery Crawl. Tickets allowed the shuttle of hundreds of guests from the Teller House parking lot to the Cemetery. Depending on v... END_OF_DOCUMENT_TOKEN_TO_BE_REPLACED

Where the dead get to tell their story By Jaclyn Schrock On Saturday, August 21, the Gilpin Historical Society held their annual Cemetery Crawl. Tickets allowed the shuttle of hundreds of guests from the Teller House parking lot to the Cemetery. Depending on v... END_OF_DOCUMENT_TOKEN_TO_BE_REPLACED