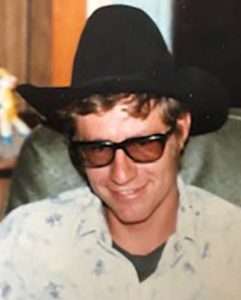 Harvey Merle McCollum passed away on Christmas Day 2019, in Hotchkiss, CO. He was born in Rollinsville, CO, to parents Donald and Roberta McCollum. He spent his childhood roaming the mountains and foothills of the Front Range while attending the small elementary school in Rollinsville.
Harvey attended the Nederland Middle Senior High School through ninth grade and then attended a Vo-Tech program for mechanics. After a year, he proceeded to on-the-job training with Brown’s LP Gas, where he worked for two years before going to work at his father’s business, Mac’s Coal & Wood.
While working for his father, Harvey married his childhood sweetheart, Cindy Rugg of Eldora, on April 14, 1974. In 1976, Harvey left Mac’s Coal & Wood to work for Boulder County Road & Bridge Maintenance, where he remained for 11 years working the mountain roads of the Peak to Peak region.
During that time, Harvey started his own side business called Harvey’s Excavating, doing mine closures, house foundations, and septic system installation throughout the Nederland and Gilpin County area. In 1988, he left Boulder County employment to take his business on full time, and from there he became one of the most trusted, premier excavators in the mountain region and beyond.
Harvey McCollum was a highly skilled heavy equipment operator who could do work that was seemingly impossible to others. A natural born mechanic and driver, he could fix anything brought his way and often did. He is responsible for training numerous operators in the area including his son, most of whom are now operating their own businesses today.
It is well known in the region, if you dig into the ground somewhere, chances are that Harvey McCollum has been there before. The impact that he had over the Peak to Peak region through his hard work and generosity of spirit caused the area to grow exponentially into the thriving community we live in today.
He was known to be a very caring and kind man to his family, his friends, and to any stranger he saw in need. Harvey would give the shirt off his back to you if you needed it.
Harvey went to work for McCollum’s Excavating in 1997. There he supported the family business and witnessed the fruits of his labors through his son, Steve. Harvey taught Steve everything he knew about operating equipment, truck driving, and running a business.
In 2015, Harvey broke away to a new venture, something he had long wanted to explore further – ranching. He had always maintained a special connection with animals and was known as something of a dog and horse whisperer capable of charming the most aggressive or ornery of beasts. He moved to Hotchkiss onto Steve’s property and became a cattleman, tending cattle and irrigating hayfields until he passed. His charming personality, great sense of humor and kind nature touched many people throughout the Front Range and his new home in Hotchkiss and Delta. He will be remembered fondly for years to come.
Survivors include his mother, Roberta McCollum, sisters Mary and Chris, and brothers Paul and Dean. Children and grandchildren include Steve McCollum and children Kelsi, Kacie, Liam, and Lance; Stephanie McCollum and children Rylee and Payton, as well as his border collie of 17 years, Bacardi.
Memorial services will be conducted on January 18, 2020, at 3 p.m. at McCollum’s Excavating shop at 104 Jankowski Drive in Gilpin County.

Courtesy of The Mountain-Ear and Monica LaSalle.

END_OF_DOCUMENT_TOKEN_TO_BE_REPLACED

Benefitting the county, schools, and much more By Don Ireland   This year marks the 30th anniversary of casinos opening in the former little mining towns of Black Hawk, Central City and Cripple Creek, Colorado. In those early years, smoking was allowed inside ... END_OF_DOCUMENT_TOKEN_TO_BE_REPLACED