Happy trails to you from the Gilpin County Fair! 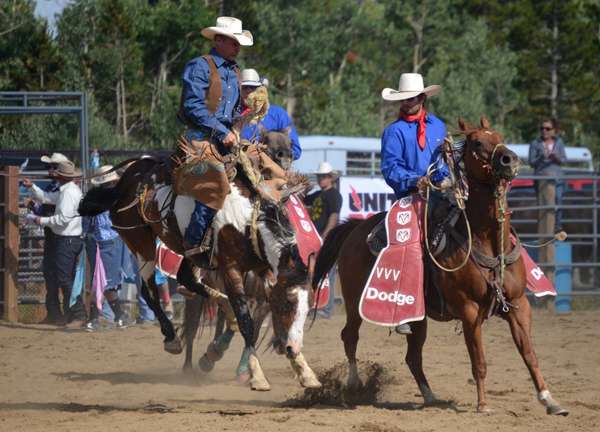 Hundreds of young and young-at-heart turned out for the 24th annual Gilpin County Fair August 20-21 at the fairgrounds complex. The event showcased familiar favorites and many innovations. Even the weather cooperated, with nary a raindrop in sight.

Here’s a sampling of what was new or updated this year:

Saturday’s popular Mardi Gras bull-riding event was back, this time adding ranch bronc riding, mutton bustin’, and a wild and woolly sheep scramble. After the show, fans clustered around their cowboy heroes for a meet-and-greet. Austin Pacheco, Travis Kendrick, Zach Mullins, Brooks Forsythe, rodeo clown Eric Myrick, and several other daring bull and bronc riders favored their admirers with autographs and tidbits about the perils of the rodeo circuit.

The ATV competition proved to be a thrilling new favorite. All comers were tested in several events. The ATV tire race needed two participants – a driver and a brave, dirt-eating passenger who was towed on a tire behind the ATV. The skilled drivers also maneuvered around an obstacle course, weaved around cones, and flew over barrels. The grand finale was a fast-paced game of soccer.

Several young Gilpin bicyclists were proud to open the new BMX course with a ribbon-cutting ceremony. Gilpin County Road & Bridge had moved the dirt to the site, located at the north end of the arena, and the kids had helped with the finish work. The track will be open to the public from now on.

Jackpot barrel racing was also new in the line-up. $300 was added to the entry fees for the pot. The first-place contestant got half of the winnings, with second-place receiving 30 percent and third place 20 percent.

“Blizzard & Boo” performed on Sunday for the crowd’s enjoyment. Blizzard is a ten-year-old registered Texas Longhorn that weighs in at 2,300 pounds. Boo is Blizzard’s petite handler. The gentle steer performed appealing tricks and showed an affectionate bond with Boo as he responded to simple voice commands.

Timberline Fire modeled the latest fashions in uniforms and equipment, including gear needed for work with hazardous materials, ice or swift water rescue, and medical calls.

Kids enjoyed digging in the sandbox or cooling off inside water walkers (like giant hamster balls) in the Gilpin Community Center pool.

For those who weren’t all tuckered out, there was an after-party and awards presentation at the Mardi Gras Casino in Black Hawk Saturday night.

Last but most certainly not least, the Fair was organized by new coordinator Heather Pearce. Under the able guidance of former coordinator Vicki Nemec, Heather helped organize the Fair for the past three years and did an excellent job in her inaugural event.

The only unfortunate note was that the traditional bonfire and the DAR’s flag disposal ceremony were canceled in observance of the county’s fire ban.

END_OF_DOCUMENT_TOKEN_TO_BE_REPLACED

Benefitting the county, schools, and much more By Don Ireland   This year marks the 30th anniversary of casinos opening in the former little mining towns of Black Hawk, Central City and Cripple Creek, Colorado. In those early years, smoking was allowed inside ... END_OF_DOCUMENT_TOKEN_TO_BE_REPLACED

Benefitting the county, schools, and much more By Don Ireland   This year marks the 30th anniversary of casinos opening in the former little mining towns of Black Hawk, Central City and Cripple Creek, Colorado. In those early years, smoking was allowed inside ... END_OF_DOCUMENT_TOKEN_TO_BE_REPLACED