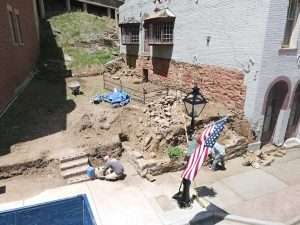 One-Way is Your-Way in Central City

Mayor Fey led the Pledge of Allegiance and then asked for any amendments or additions to the evening’s agenda. Manager Miera added an item to introduce the Gilpin Sheriff’s Office Division Chief Sean Wheeler.

The Mayor called for a motion to approve the consent agenda which consisted of the minutes from the June 1 meeting and regular bill lists through June 2. Alderwoman Laratta moved to approve the Consent Agenda and was seconded by Alderman Aiken. The motion passed unanimously.

All Hail the Chief

Sheriff Kevin Armstrong introduced the new Division Chief of the Gilpin Sheriff’s Office, Sean Wheeler. Chief Wheeler will be active in overseeing the service and protection of the City of Central.

The Council considered approval on one Resolution, one Ordinance, and approval of Gilpin History’s proclamation.

Jim Crawford gave a proclamation announcing the 50th Anniversary of Gilpin History Museum. The proclamation states, “On behalf of the Citizens of Central City and the City Council, we do hereby proclaim recognition of the 50th Anniversary of the Gilpin History Museum and urge all residents to share in this success through participation in the many events held during the year.” The Museum is hosting a grand opening on Saturday, June 26 from 11:00 am to 1:00 pm and offers free food while it lasts with reduced museum admission of fifty cents per person.

Director Hoover introduced Resolution 21-16 which would approve a services agreement between the City and One-Way, Inc. for residential trash services. A Request for Proposal was published for trash services and they received no responses. Director Hoover negotiated terms with One-Way for the remainder of 2021 and the entirety of 2022. The approximate cost is between $23 and $25 per collection unit (residence) per month.

An Ordinance of Garbage

Director Sam Hoover introduced the first reading of Ordinance 21-04 which would amend the municipal code to add Article III concerning residential waste services. This would authorize the City to implement a fee for trash service for residents. Fees would be added to the water bill and collected monthly. The amount of the fee would be set by Council. This Ordinance does not establish a fee. Any fee schedule would have to be approved by Council and the Fee Schedule updated prior to imposing a fee on residents.

Alderwoman Laratta moved to approve the first reading of Ordinance 21-04 and set the second reading and public hearing for Tuesday, July 6, and was seconded by Alderman Aiken and Alderwoman Johnson simultaneously. The motion passed unanimously.

Alderwoman Laratta commented that the City “looks really great” and she is “so happy the pandemic is coming to an end.” She added that we should realize that we lost more than 600,000 people to COVID in the United States as of today.

Alderman Aiken commented that having the Opera parking lot blocked off is not a great neighborhood policy when the Opera is not performing in Central this year. He also commented that the Opera is not allowing tours of the Opera House or the Teller House and would like someone from the Opera to explain that. Mayor Fey responded that he is a board member for the Central City Opera and will articulate Alderman Aiken’s concerns. He added that when the Opera Festival is going on, they utilize all parking lots in the area. Aiken stated, “At this point I am voting against granting them money next year.”

Mayor Fey commented that he felt good about having guests back in the room and the partitions between participants have been taken down. He also announced the birth of his third daughter this last Sunday (June 13).

Barbara Thielemann addressed Council to thank them for their contribution to the Belvidere Foundation. “I have never worked with more compassionate committed people.” She also agreed about the Opera parking lot and wrote a letter of her concerns to the board.

Sheriff Armstrong addressed Council with an update on COVID. There were five cases last week making eight for the month. Forty-eight-point-nine percent of Gilpin residents are fully vaccinated. In July, a Vaccine Bus will come to Central City and Black Hawk to help vaccinate the visitors to the casinos. Vaccines will also be available at the Levit Street Market on Sundays from 10 am – 2 pm when the market is open.

Mayor Fey adjourned the regular meeting at 7:56 pm. The next regular Council Meeting will be Tuesday, July 6, 2021.

END_OF_DOCUMENT_TOKEN_TO_BE_REPLACED

Benefitting the county, schools, and much more By Don Ireland   This year marks the 30th anniversary of casinos opening in the former little mining towns of Black Hawk, Central City and Cripple Creek, Colorado. In those early years, smoking was allowed inside ... END_OF_DOCUMENT_TOKEN_TO_BE_REPLACED