Growing up with Colorado Parks and Wildlife 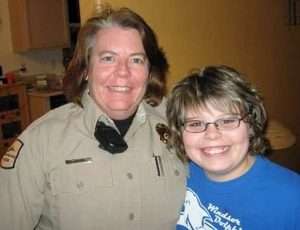 Bet your mom never brought a snake to school for show and tell!

My daughter Jenna was 10 when I became a Park Ranger; she is now 21. Early on, I would come home and describe some crazy interaction I had with wildlife, campers, boaters or hikers. Jenna’s favorite comment was always: “I bet none of my friends’ moms did or said that today.”

Those conversations continue today. Most recently, I got that reaction from her when I told her casually that I needed to “take the bullets out of the cup holder.”

It got me thinking about what it must be like to be a kid of a Colorado Parks and Wildlife ranger or officer.

So I compared notes with my friend Frank McGee, the Area Wildlife Manager in Colorado Springs, about conversations he has with his own children. Frank began his career as a wildlife officer with CPW in 2004 and has two kids who were born into the agency.

He asked his 13-year-old daughter Bridget to jot down some of her thoughts about being a child of a wildlife officer. And I asked Jenna to write about her life as a park ranger’s kid. Here are some of their observations of “Growing up CPW.”

Both have memories of our work as wildlife and conservation educators.

Bridget had a great memory of her dad bringing a live bear for show-and-tell to her first-grade class. Her class quickly was joined by the entire student body in the parking lot.

“My mom had to call the principal because everyone was outside,” Bridget wrote.

Seems Frank had stopped by Bridget’s school on his way to relocate the bear. It was all in a day’s work.

Like Frank, I went to Jenna’s school from time-to-time. I’d visit to participate in career days, to teach conservation classes or talk about boat safety.

I can’t top Frank for bringing a living bear. But I took bull and hognose snakes and spiders, like one of our local tarantulas, to school and I made Jenna proud when I brought a boat and let the kids crawl all over it to stress boating-safety lessons.

The CPW influence showed up when Bridget wrote a class assignment about her favorite animal and her favorite food. Most kids wrote about the family pet and pizza or cheeseburgers as their answers. In true CPW kid fashion, Bridget’s answer to both questions was the same: antelope.

Both girls also have more serious memories about the work Frank and I do for CPW related to law enforcement. That side of our jobs can be difficult to maneuver as parents. You want to tell them what you experience in hopes they will avoid those situations. But often their age prevents full disclosure. We only want to warn them, not traumatize them.

Bridget and Jenna each mentioned their parents being out late or leaving home unexpectedly late at night. Both have a surprising understanding of why it happened, even if they rarely knew any details.

“It could be hard,” Bridget wrote of Frank leaving at night or working late. “Overall, I think it is okay because his job is really important to us and the state.” (Bet that line makes Frank smile.)

Jenna, too, remembers some of my late nights or middle-of-the-night phone calls when a boater went missing or a criminal case erupted in the park requiring me to jump into action.

“I worried as a kid,” Jenna said. “Now that I’m older, I’m just impressed by the work you do.”

That comment from Jenna makes me smile!
So does her reflections on my coworkers being like family. That relationship with our fellow officers is key to our own sanity. They are the ones that hear the details and feelings attached to the rough calls. We are fiercely protective of each other and each other’s families.
I’m glad she feels the way I do about my CPW sisters and brothers. Since I often work away from the town that I live in, Jenna’s emergency contact list is filled with CPW co-workers.

Actually, CPW feels like family because so many CPW kids end up following in their parents footsteps, or at least following them into the agency. Our new director Dan Prenzlow’s father was an assistant director. This job runs in your blood.

Jenna said life as a CPW kid could not be explained in a few words, but if she had to pick a word it would be “priceless.”

I will leave you with a Bridget memory. One time, Frank had one of her classmates pretend to be a sheep and he chased him around with a mountain lion skull to show how lions take down their prey.

Guess what I was thinking when I read that line: “I bet none of her friends’ dads did or said that today.”

Darcy Mount is a Senior Ranger at the Cheyenne Mountain State Park.

END_OF_DOCUMENT_TOKEN_TO_BE_REPLACED

Benefitting the county, schools, and much more By Don Ireland   This year marks the 30th anniversary of casinos opening in the former little mining towns of Black Hawk, Central City and Cripple Creek, Colorado. In those early years, smoking was allowed inside ... END_OF_DOCUMENT_TOKEN_TO_BE_REPLACED

Where the dead get to tell their story By Jaclyn Schrock On Saturday, August 21, the Gilpin Historical Society held their annual Cemetery Crawl. Tickets allowed the shuttle of hundreds of guests from the Teller House parking lot to the Cemetery. Depending on v... END_OF_DOCUMENT_TOKEN_TO_BE_REPLACED