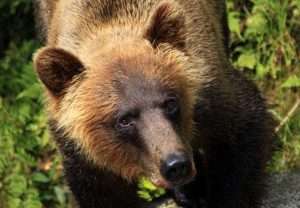 At the Anan Creek Observatory

There are multiple destinations in Alaska that guarantee bear sightings. Some, like Denali, Brooks Falls, McNeil River, and Pack Creek are renowned for their grizzly bears – also known as brown bears – while other locales, like Anan Creek, offer the opportunity to view both grizzlies and black bears.

Thirty miles south-southeast of Wrangell, Anan Creek Observatory lies within the Tongass National Forest and is only accessible by boat or floatplane. Up to three hundred thousand pink salmon return every year to Anan Creek, making it one of the largest pink salmon runs in southeast Alaska. Stikine Tlingit peoples utilized fish camps at the mouth of the creek until 1900. Curing salmon for the long winter ahead, the bounty was so great that it supported numerous clans, which were sometimes at odds at other times of year, in a cooperative venture. Perhaps taking a cue from humans, with an overabundance of food available, grizzly bears and black bears commingle freely, hardly paying the other heed.

At the trailhead of the observatory, a brief orientation is given by Park Service interpreters before setting out on the half mile Sitka spruce-shaded walk along the creek uphill to the falls. A mixture of dirt path and two-foot wide elevated boardwalks, they are covered with chicken wire for better traction in the notably soggy temperate rainforest. Bald eagles are everywhere – feeding on scraps that the bears leave behind. Harbor seals cruise the lagoon, gorging themselves on salmon. Mink are also said to be in the area and wolverines have been spotted.

Upon arriving at the observation deck, I registered for my turn in the photo blind. Only six people at a time are allowed inside for a half hour. Putting you within 20 feet of the bears, it affords the best opportunity of capturing a close-up shot of one of the wild bears snagging a fish. Biding time on the deck is a great second option, giving one an overall feel for the place and sometimes a better view of the action. Once, by my feet, a young black bear sow lingered within inches. A brown bear scaled the hillside and cruised past the outhouse. Since in the past, users have been known to exit the privy only to find themselves face-to-face with a large, burly, carnivore, a system is now in place whereas when one’s business is complete, you are required to wiggle your fingers through a hole in the door until given the go-ahead.

Descending 35 feet down the stairs to the blind, my time had come. A dark tent with wooden stools and narrow rail to steady cameras on, flaps opened on its walls at eyelevel and below. An adult black bear stared into the water intently while crouched at the side of the creek below a rapid. A fish’s tail swished as he took a swipe at it. Another jumped into the air that the bear rushed toward, but it was gone. A minute passed and a salmon tried to clear the rushing whitewater but was trapped against a submerged rock by a furry paw. Clamping down on the fish with its jaws, the bear carried it to the bank. Pinning the salmon’s head to the ground under splayed claws, he proceeded to rip the fatty skin off the flanks in his teeth and devour it with practiced efficiency. Nibbling on some flesh afterward, it was back to the exact same spot for more fishing.

The half hour elapsed quickly in a blur of bears and Pacific pink salmon. The black bears came and went, exhibiting different fishing techniques and behaviors. Smaller bears would retreat to the many stony crevices after securing a meal, lest they be harassed by other bears. Female bears would often take their catch into small caverns where the young were served. With our jet boat awaiting us in the bay, on the way back, a pair of brown bears feasted contentedly in the middle of the creek.

Naturally, the best way to follow up a day of world-class bear viewing at Anan Creek is to repeat it with a second day. Returning to the observatory for another session and a seasoned veteran at that point, I noticed walking sticks that looked like ski poles stowed on the ceiling of our boat. A genteel retired couple sat beside me eagerly anticipating their first encounter with the bears. Unable to restrain myself, I turned to her pointing at the suspended sticks and advised that she get in line early for a “bear poker.” After her jaw dropped and eyes widened, keeping a straight face as long as I could, my smirks finally betrayed my ruse. Slightly embarrassed by being taken the fool, I’m not sure she appreciated the joke as much as I did.

To prevent bear viewing at Anan Creek from becoming a spectacle, only sixty people with passes are permitted per day during the peak season of July 5th through August 25th. It is best to secure these or book with a local charter at least three months in advance of your arrival.

Eric Yancey of Breakaway Adventures at www.BreakawayAdventures.com or (888) 385-2488 will ensure that your experience is a memorable one.

Alaska Waters at AlaskaWaters.com or (800) 347-4462 is native owned. Their heated jet boat boasts the only marine head among Anan Creek tour operators.