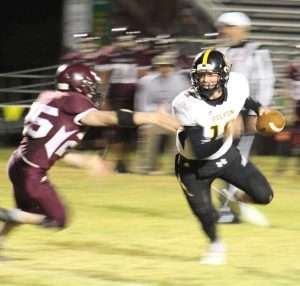 Last Friday’s football game was played under the lights, on the Soroco Rams high school football field in Oak Creek, Colorado. Game time, originally scheduled for 7:00 PM, was moved up to 6:00 pm. Upon receiving the initial kickoff the Eagles fumbled the ball causing a turnover to the Rams on the Eagle’s own 12-yard line. On the first play of their possession the Rams scored a TD followed by a 2-point conversion. Thru the remainder of the first quarter the Eagles offense did not score and the defense allowed 5 more Rams TDs followed by 2-point conversions for all but one TD ending the quarter with a score of Eagles 0 to Rams 46.

In the 2nd quarter the Eagle’s offense only possessed the ball twice, 4 downs each ending in punts. The Eagles stepped up their defense allowing the Rams only one TD after the offense turned the ball over on a 4th down at the Eagle’s own 37-yard line. The Eagles stopped a 2-point conversion attempt and the quarter ended with a score of Eagles 0 to the Rams 52.

After opening the 2nd half with a kickoff to the Rams the Eagle’s defense turned up the heat. The Rams retained possession of the ball for most of the 3rd quarter including an18-play drive but were finally stopped on the on a 4th down play on the Eagle’s own 2-yard line.

The Eagle’s 4th quarter defense stopped the Ram’s only offensive drive of 7 plays on a 4th down attempted run. The Eagle’s offense made a valiant effort in the last quarter including an Eagles 9-play, 76-yard drive to the Rams 10-yard line. In the last seconds of the game the Rams forced an Eagle’s fumble on an attempted pass deep in the backfield. The Rams scooped up the fumbled ball and ran it for a 90-yard TD as the clock ended the game. The final score was the Eagles 0 to the Rams 58.

Eagle’s coach Craig Ball had the following comments: “We had a full team effort on Friday Night in Oak Creek. The game started out with rain and this was the first time our team had faced a wet ball all season. The team adjusted to the conditions and we were able to control the ball during most of the game. Running the ball was difficult against Soroco and we used the pass effectively to move the ball for much of the game. Blake Boulter was able to connect with Kamron Brewer multiple times to advance the ball…but we had difficulty punching it into the endzone.

I was really proud of our defense in the second half. Moving a few players around we were able to hold the Soroco offence to zero points and we had two 4 down stands inside the 10-yard line for turnovers on downs.

We will take the momentum we built into our bye-week and get ready for our Saturday night home game against PV on Oct. 12th.”

The Eagles next matchup will take place against the Cowboys of Plateau Valley High School. The game is scheduled to begin at 6:00 PM on Saturday, October 12, on the Eagle’s home field under the lights.

END_OF_DOCUMENT_TOKEN_TO_BE_REPLACED

Where the dead get to tell their story By Jaclyn Schrock On Saturday, August 21, the Gilpin Historical Society held their annual Cemetery Crawl. Tickets allowed the shuttle of hundreds of guests from the Teller House parking lot to the Cemetery. Depending on v... END_OF_DOCUMENT_TOKEN_TO_BE_REPLACED