Gregory Street Plaza – a journey to Black Hawk’s historic past 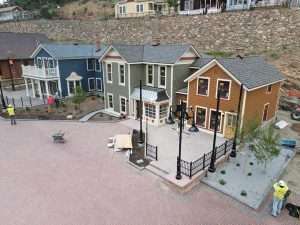 The Future of Black Hawk, Part 3

(Editor’s note: This is the final installment of a series regarding the ongoing Black Hawk renaissance, including planned developments and attractions.)

When the Gregory Street Plaza officially opens in July, it will offer the opportunity for people to step into the past and experience Black Hawk’s rich history.

If you’ve driven between Black Hawk and Central City anytime during the past year or so, it’s been nearly impossible to miss the sight of cranes, bulldozers, stacks of building materials and lots of workers along Gregory Street. The multi-million-dollar project, which took years to plan, is another part of the ongoing Black Hawk renaissance.

Officially, the work site is part of the Gregory Street History Appreciation Recreation Destination (HARD). The acronym HARD is a play on the hard-rock mining that occurred in the area during the Colorado gold rush – an era that lured thousands from the East to seek a fortune locally during the mining heyday 160 years ago. The HARD district of Black Hawk begins around the former Crook’s Palace saloon and restaurant and stretches west uphill to Gregory Point, a group of small, Victorian-style homes formerly called Mountain City.

Because of its prime location, the Gregory Street Plaza has been the most visible of the current Black Hawk projects. It is another part of the city’s ongoing renaissance plan, which also includes creation of the forthcoming Artisans’ Point distilling district and Proximo Spirits’ $50 million project – the Lake Gulch Whiskey Resort – atop Gregory Hill. Expanded hiking and biking trails covering more than 700 acres also are part of the plan, as is construction of Hawk’s Landing, which will feature 50 permanently installed Airstream trailers for overnight lodging. (These renaissance programs were discussed in earlier installments of this series.)

The standout feature in the center of the HARD development is the Founders’ Clock, which was built with a prominent, detailed design. Three of the four clock faces bear historic names: William L. Lee, Dr. Frederick H. Judd, and Milo Lee. The three were principals of the Black Hawk Gold Mining Company – the name on the fourth clock face. Judd and the Lees, who had the same surname but weren’t related, moved from Rock Island, Illinois to the hills west of Denver. “They deserve an abundance of recognition for essentially founding and incorporating the City of Black Hawk,” Spellman noted. “Although many pioneering men and women warrant credit for fostering the development and ensuring the success of the city, these three men deserve recognition for the formation of Black Hawk.”

An historic plaque featuring a photo of the three Black Hawk founders and accompanying related history will be on display next to the Founder’s Clock. Mayor Spellman supplied the photographs and artifacts from his personal collection for the display plaque. The photo of the founders was obtained by the mayor when he purchased an old photo album of Ovando J. Holliser, publisher of Black Hawk’s Daily Mining Journal, which was printed from 1863 to 1866.

The white clock faces are backlit for easy viewing at night atop the distinctive, decorative black metal pedestal-pole. Chimes from speakers within the Founder’s Clock echo through the valley in which it is located.

At the westernmost edge of the Gregory Plaza HARD showcase is the Black Hawk Fire and Hose Company No. 1. Museum. Among its historic features are a motorized, 1935 antique Chevrolet firetruck, and an 1879 hose cart which was manually pulled. Local volunteers operated Black Hawk’s fire department from the 1870s until gaming arrived in the early 1990s. The city created a paid professional fire department at that time and purchased equipment that could provide services for the skyscraper-sized casino buildings in the city.

The Rocky Mountain Evangelical Free Church, situated near the volunteer fire museum, will reopen for services at 331 Gregory Street. The brick on the church has been restored as have the stained-glass windows on three sides of the chapel. “It looks gorgeous. It is a fabulous little property,” according to the mayor.

Several original area homes – the Norton, Woodbury, and McAfee homesteads – also have been restored. The McAfee house is at 305-311 Gregory St. while the Woodbury home is at 321 Gregory. The Norton property is situated at 351 Gregory St.

Two homes were joined together to create the new McAfee home, named after one of the early pioneering families. The two-story building is the largest home on the site.

The blue house next door is the Woodbury House. “Benjamin Woodbury was one of the first aldermen in the City of Black Hawk in 1864,” continued the mayor, whose personal hobby is collecting historic memorabilia of his hometown. “Later on, Woodbury became the mayor. By trade, he was a building contractor. A former barn next to the house was his actual business location. I have one of his business cards.” On the opposite side of the church rests the Norton House. James B. Norton was Woodbury’s business partner.

“The homes are expected to be retail in nature but we don’t have any specific tenants lined up right now,” said Spellman. “We’re considering some type of gift shop – perhaps offering “made in Colorado” goods. We’d like to have some nice items in that Colorado-only shop that aren’t overly-priced. We’re also talking with an artists’ co-op about having some space. There aren’t any plans for a grocery store or any service businesses.”

The main plaza area will be used for small concerts and events that may include vintage car and motorcycle shows. Hidden in the decorative light poles around the plaza are multiple speakers, which connect to a sound system. “It’s wired for a public address system that you can hear anywhere on the plaza,” Spellman commented. “We can have a live band there that can use the speakers. We can also play music anytime, including holiday music at that time of the year. There will be free wi-fi on the plaza, too. It will be a very inviting setting.”

The St. Charles Carriage House, located across the street, offers 122 parking spaces on three levels. The structure was named for the St. Charles Hotel, one of the first hotels that opened in Black Hawk around 1861. It was among the first buildings constructed along Gregory Street in anticipation of the plaza. There will be pull-off spots for busses on both sides of the street.

“We built the St. Charles Carriage House first and were criticized by some outsiders because they didn’t understand our overall plans. Nobody understood what we were going to do at the Gregory Street HARD district. However, you have to have parking available for anything you’re doing. That’s the reason we did the parking structure first. You need to have parking to help make these businesses successful in the future,” the mayor commented.

Just east of the main plaza are the old Eureka and Lucky Star casinos at 221 Gregory St. “We own those properties as well and have plans to renovate them,” Spellman said. “The construction drawings are 100 percent complete. We were ready to pull the trigger and get the renovation work started, but were halted because of Covid. Those buildings already have been gutted and co-joined. Ideally, we’ll get that project started again next year. We plan to have an elevator installed for the forthcoming businesses on the second floor.”

The former Crook’s Palace saloon and restaurant, on the south side of Gregory Street, has been closed for several years. “However,” the mayor continued, “we have plans for it and the former Eureka and Lucky Star casinos across the street.”

For those walking up Gregory Street to the new plaza, “The Grand Staircase” will await them after it is completed. “Because of Covid, we won’t start on that until 2022. The staircase will become an icon,” emphasized Spellman. “It will be near the building that currently houses the (cannabis) dispensary. A decorative metal head frame will be over the staircase welcoming visitors to the HARD section of the city. It will become an architectural feature by itself – a Black Hawk icon. The attention to detail on it will be incredible.”

For visitors who require a bathroom, there will be two restrooms and water fountains on the site. Spellman noted city leaders wanted to offer appropriate facilities, rather than use portable toilets. One restroom building will be near the fire truck museum. “We don’t want to have porta-potties out there when we’re having a special event,” Spellman said. “We’re building this for a time when it’s much busier in that part of town.”

The other restroom will be in what’s called the restored “Bunk House” building, a small structure that was relocated from lower Gregory Street. Its new resting site is across from the plaza and next to the Bobtail Tunnel, built in 1863. “In the future, we’d like to create a mining museum and have the Bobtail Tunnel open for visitors to tour,” Spellman noted.

Once completed, the restored 1879 Bobtail machine and blacksmith building at 426 Gregory St. will give visitors a glimpse of how Black Hawk’s ancestors mined gold in the region. Thousands of people came to Colorado after John Hamilton Gregory (namesake for the plaza) discovered gold on May 6, 1859 in the Black Hawk-Central City area. The gold rush preceded Colorado becoming a state in 1876.

The existing Gregory Point area – formerly called the Mountain City area – features several small, Victorian-style homes. It is several dozen yards downhill from the Red Dolly Casino. Black Hawk City Manager Stephen Cole said forthcoming plans include some upgrades to the tiny neighborhood, which has been mixed-use and situated on a steep hill. Repairs to railings in the development are planned and the city is considering installing an elevator at some point in the future to improve access.

Commented Spellman, “There still are three lots available for development on Gregory Street. “We’re still hoping for a developer to come in or we might end up doing something with them ourselves and lease them out. The level of detail that’s being done at the plaza is comparable to the level of detail that was done on the Monarch Casino,” Spellman said. “Anything you’ll see on the plaza is comparable to anything you’ll see in Aspen, Vail, or Telluride.”

END_OF_DOCUMENT_TOKEN_TO_BE_REPLACED

ShareTweetShare on Google+Pin on PinterestSend with WhatsApp
18 recommended

END_OF_DOCUMENT_TOKEN_TO_BE_REPLACED

Benefitting the county, schools, and much more By Don Ireland   This year marks the 30th anniversary of casinos opening in the former little mining towns of Black Hawk, Central City and Cripple Creek, Colorado. In those early years, smoking was allowed inside ... END_OF_DOCUMENT_TOKEN_TO_BE_REPLACED