Got science? Imagination and knowledge a “sweet” combo at school fair 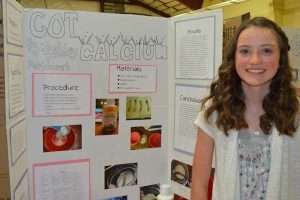 Albert Einstein once said, “Imagination is more important than knowledge.” How about a little bit of both?

Gilpin County School students combined those two ingredients in 148 science fair projects last Thursday, November 5. They presented their exhibits to 28 judges in the morning, and public viewing was held in the afternoon prior to winners being announced.

Sharon Lutes, fair coordinator and fifth-grade teacher, explained that the students began registering for the fair back in September and worked on their projects throughout October. Children in all grades had learned a lot, and Lutes was pleased that even kindergarten students knew the answer to “What is your hypothesis?”

Although no high school students participated, Lutes hopes to involve them more next year by placing more of an emphasis on STEM education (science, technology, engineering, and math).

The children were enthusiastic about their projects. They showed off neat and imaginative science fair boards, complete with charts and graphs, photos, drawings, and reports. Most students had helpful visual aids for the judges, fellow students, and community members to examine. Several remarked that they had found the ideas for their projects in books, and some had modified the books’ original suggestions to fit their own interests.

Children in kindergarten through sixth grade found that you can cook s’mores in a solar powered oven using simple household items. A small spark of lightning can be produced with a simple fork and a balloon. You can also petrify a paper towel with Elmer’s glue and water. The students performed a dozen or so egg experiments, including testing which egg could sustain more weight, a raw egg or a hard-boiled egg – the hard-boiled egg was the winner, able to bear 30 pounds before cracking. Others made “volcanoes” with baking soda and vinegar, tested what ingredients worked best when baking cupcakes, and tried their hands at making lava lamps.

Middle school students had equally creative but more substantive concepts. Articulate eighth graders described which decomposing vegetables produced the most methane gas in a compost heap; what effect water temperature had in corroding aluminum cans; and which brand of volleyball holds air pressure better than others when descending in elevation.

The judges enjoyed their assignment and took it seriously. Gary King was impressed that, in general, the students did most of their own work without parental intervention. Geoff Lutes looked for a youngster’s ability to explain his or her project confidently. All the judges had their work cut out in awarding the top scores.

There were two grand prize winners this year. Fourth grader Aucklynn Sacco, looking the part in her white lab coat, won the elementary grand prize for her “Magic Glucose” project. Aucklynn, who also won the grand prize last year, became interested in chemistry while reading a basic chemistry book at home. With Halloween looming, she decided to see how much glucose was in her trick or treat candy. She hypothesized that Nerds would have the most glucose out of six different candy brands. Using Benedict’s test for sugars in her scientific procedure, she determined that Nerds came in second, behind candy corn.

Ashley Parkhurst won the middle school grand prize for her “Got Calcium?” project. The eighth grader had observed that older people often break bones due to osteoporosis and wanted to find a way to strengthen bones. She coated chicken bones with a liquid calcium supplement and noticed that the supplement did make bones stronger by replacing old calcium with new calcium, causing the bone to become stronger and regrow.

First through third-place winners were:

The purpose of the fair was to allow students to learn the process of scientific investigation, to present and discuss their findings with other students, teachers, and scientists in the community, and to recognize and reward outstanding student thinking, research, and presentation.

The students were required to use the scientific method, which is a way to ask and answer scientific questions by making observations and doing experiments. The children were required to show their procedure, analyze their data, and present their results and conclusions. They explained their experiments to three judges, who scored them on knowledge of the scientific method in the preparation of their display, their knowledge of the project, and the visual organization of their data.

END_OF_DOCUMENT_TOKEN_TO_BE_REPLACED

Benefitting the county, schools, and much more By Don Ireland   This year marks the 30th anniversary of casinos opening in the former little mining towns of Black Hawk, Central City and Cripple Creek, Colorado. In those early years, smoking was allowed inside ... END_OF_DOCUMENT_TOKEN_TO_BE_REPLACED

Where the dead get to tell their story By Jaclyn Schrock On Saturday, August 21, the Gilpin Historical Society held their annual Cemetery Crawl. Tickets allowed the shuttle of hundreds of guests from the Teller House parking lot to the Cemetery. Depending on v... END_OF_DOCUMENT_TOKEN_TO_BE_REPLACED