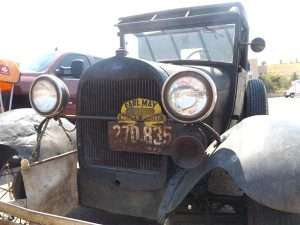 On Old Golden Road from Sonic to Subway

Anyone who has ever driven through old town Golden the first Saturday of the month has gotten caught up in the chaos known throughout the region as the “Golden Super Cruise.” It is a collection of hot rods, classic cars, rat rods, unique cars, hopped-up modern rides, and super cars. They are all on display for car buffs to admire and drool over.

The free car show/cruise event is held the first Saturday of every month between May and October. According to one of the vendors, 2017 might be the fifteenth or seventeenth year. “Don’t print that ‘cause my memory is a little fuzzy” he said. Too late, that was the only solid answer I got from anyone I talked to. Most replied with “I don’t know – it’s been around for a long time.” According to the website www.goldensupercruise.com, the cruise is from 5:00 until 8:30 pm, but the car show has an impromptu start around 7:00 am with car owners arriving early to park in the best spots along the route.

Being a fan of pick-ups of all makes and years, I was drawn towards a nice looking stock 1965 Ford F-100, two wheel drive owned by Joseph and Mary Mares of Denver. It has the original Ford 223 C.I.D. inline six cylinder engine, and 4 speed transmission with only 49,000 miles on it. Joseph, not being a man of many words, tells me that it was a found in a barn on 38th and Shoshone back in 1985 and it wasn’t in the best condition. When asked how long it took to complete the restoration Mares replies “…since 1985,” meaning it’s an ongoing project. Mary smiled and nodded in agreement all the while watching the parade of unique cars rolled by on Old Golden Road.

The Golden Super Cruise attracts about 1,200 to 1,500 people and 500-700 different cars. According to one gentleman who didn’t want his name used, “Some of us have multiple cars, we show one for a couple of hours, go home, bring back another and show it until the Cruise closes.” The crowd is a cross-sectional slice of America. From business people to retired folks, all ages, and all different races they all had one thing in common; getting from point A to point B in the style that suits them best.

If you ever had the desire to own a hot rod or classic, there were plenty of cars that were looking for new owners. They range from $10,000 to $70,000 in price. One such vehicle was a 1970 Datsun (when the last time you heard that word) pick-up. The owner wants $11,000 for it. Granted this is probably a fraction of what he had invested into it, but five times over the original new vehicle price.  This is an example of the enthusiasm that folks have for the invention of the wheel. One passerby looking at the Datsun said, “This is identical to the one I bought in the 80’s for $500. It was a work truck and I drove it into the ground.” He continued, “I guess I should have hung onto it.”

Rat rods are another category of vehicles that have solid following. Rat rods are defined as a style of hot rod that imitates or exaggerates early hot rods from the 40’s, 50’s and 60’s. It is a counterculture to the high price “customs” and typical hot rods. Many of the rat rods are in the same condition as they were when they were pulled out of the field or barn. Some have exposed seat springs, gauges with busted glass or no glass and most are described as being the color of rust. Usually a rat rod has some parts that were formally not car parts at all. One such truck had a gas tank from an International Harvester tractor, a “gear up lever” from an airplane, and a beer can covering on the coil.

Rat rod fans such as Terry and Regina May from Strasberg, Colorado, own a classic 1936 five window Chevy coup. The Mays bought the coup three years ago from the estate of Wilber W. Stelk of Akron, Colorado. This car has an amazing story that accompanies it. Mr. Stelk was a Veteran from World War II, some say he was “Shell Shocked” and was very quiet man. He was an extraordinary mechanic who also made a living converting aircraft generators into arc welders. Some are still in use around the Akron area today. Upon Wilber’s return from the military he decided to build a hot rod hill climb and dirt track car. He acquired the five window coup, removed the ‘36 front end, and replaced it with a ‘48 Chevy truck front end to accommodate the 1930 Chevy truck front axle he incorporated for improved cornering and handling on the track. He also installed a 1948 235 cubic inch Stovebolt engine to increase horsepower. Wheel wells were cut-out and rolled and the wheel base was lengthened. Wilber went to extraordinary efforts to build the perfect racecar. After his racing days, the Chevy sat idle for years until his death in 2009 at which time the family sold all his cars in an estate sale. The Mays bought the car in hopes of restoring it as a classic hot rod until Regina dug into the history of the car. “This is a statement of who Wilber was. To honor him and all the early “Dirt Trackers,” we decided to make the car roadworthy and leave it at that” Regina recalls. “It needed some interior work which I did myself in Rat Rod style and some updated wheels, but other than that it is original.” The Mays were excited to be informed that they were accepted into the Central City Hill Climb on September 15-17. They had to remove the new aluminum wheels and install some original steel wheels in order to qualify. Regina jokes that the name of the car is “Rust and Wrinkles.” She says,” It has the rust, I have the wrinkles.”

With only one more Golden Super Cruise scheduled this year on October 7, it an activity that the entire family can enjoy. Even Grandma can get into it. She might tell you about the time when she and Grandpa drove to (insert destination) in a car just like this. The highly polished chrome, the rust, the smell and rumble of the exhaust, and the conversation will stimulate all the senses. It is a must visit for any gearhead – just remember to take plenty of water, sunscreen, and prepare to have a splendid time.

END_OF_DOCUMENT_TOKEN_TO_BE_REPLACED

Where the dead get to tell their story By Jaclyn Schrock On Saturday, August 21, the Gilpin Historical Society held their annual Cemetery Crawl. Tickets allowed the shuttle of hundreds of guests from the Teller House parking lot to the Cemetery. Depending on v... END_OF_DOCUMENT_TOKEN_TO_BE_REPLACED