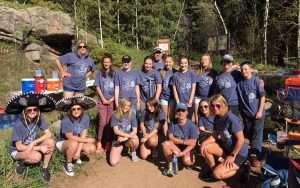 The trails in Golden Gate Canyon State Park saw plenty of traffic on Saturday, June 3, as nearly 600 trail racers ran in the ninth annual Dirty 30. The footrace hosted runners of all ages for fun and competition in 50-kilometer and 12-mile races. Proceeds from the race will be donated to the athletic teams of Gilpin County High School.

Two Gilpin students – Jack Ball and Samantha Smith – ran in the 12M and both finished first in their age group.

The Dirty 30 includes one of the toughest 50K’s in the country and has been ranked by Ultra Running Magazine as the eighth largest 50K in the United States and the 17th largest ultra race in the U.S. (An ultra race is an ultramarathon, which is longer than the traditional 26+ miles.) Racers came from all over the country and as far away as France. A very competitive men’s and women’s field vied for $4,600 in cash prizes, according to race organizer Megan Finnesy.

Gilpin’s athletes are the fortunate recipients.

About 60 Gilpin students and 50 adult volunteers handed out water and snacks at the aid stations along the course, cooked and served the noon meal, and directed traffic. Jeff Schuessler, Gilpin’s athletic director, Schuessler’s nephew Seattle Schuessler, and 2016 alumnus Chase Boulter marked over 19 miles of the trail the day before the race.

After the race proceeds are tallied, they will be divided evenly among the school’s teams. About $6,000 is expected again this year. The money is split up among the varsity sports and cheerleading and works out to be between $400 and $800 per program. Anything left goes into a fundraising account for the athletic department as a whole. The money is used by each program however they wish, such as paying for summer sports camps, team wear, team meals, or special equipment.

The race kicked off early. 50K racers began arriving at the Gilpin County Fairgrounds at 4:45 a.m. so buses could shuttle them to their 7:00 a.m. start. The 12M racers got going a couple of hours later.

Nervous energy crackled in the brisk morning air as runners warmed up to energetic tunes provided courtesy of a mobile DJ. Finnesy gave last instructions and encouragement and Mikaila Cutone-Dion from Mile High Church belted out The Star-Spangled Banner. There was a pause of anticipation. Then the “GO!” sounded, and they were off.

As they jogged and panted along, the racers enjoyed the beauty of Golden Gate State Park. They made their way through trail elevations ranging from 7,600 to 9,500 feet, taking in the cool, lush valleys and beautiful grassy meadows, the rocky scrambles, double track dirt roads, and great views of Mt. Evans.

More than 150 volunteers from Colorado’s running community came to run the aid stations and serve as course marshals and ham radio operators.

After sweating along the grueling but gorgeous trails, runners concluded with a fast and furious downhill back to the parking lot and a push to the finish line, with the crowd cheering all the way. The top 50K runners finished in under five hours.

Live tracking of the top 20 men and the top 20 women during the race was a new feature this year, made possible with GPS SPOT trace trackers. People could watch the race from the comfort of their own home. In order to provide this service, Finnesy worked with a new business out of New Zealand called MAProgress, which provides real-time satellite tracking and mapping for outdoor sports events. The joint effort helped the Dirty 30 race while also providing exposure in the U.S. for MAProgress, Finnesy reported.

Rocky Mountain Ham Radio and America Radio Emergency Service, both from Denver, used their tech savvy to track runners’ times and locations digitally and stood by to dispatch Gilpin Ambulance Authority for any injured runners. All runners wore bibs with chips on them so the ham clubs could track them.

Finnesy noted, “Roy’s Last Shot is always a huge supporter, providing the meal at their cost.”

Racers mingled with elite trail running athletes as they browsed the sponsor expo, with items offered by Ultimate Direction, Lundberg Family Farms, Runners High, Carmichael Training Systems, Tailwind Nutrition, Black Diamond, Cows Gone Coconut, Sol Sunguard, and others. Weary runners could get a massage or soak their feet in the stream. Every half hour, items like headlamps, swag, and hydration packs were raffled off.

The day was climaxed with the announcement of the winners. Prize amounts were $1,000 each for men’s and women’s 50K winners and $500 for second place, with lesser prizes for third through fifth place. 12M winners were awarded $100 for first place. Past top Dirty 30 finisher Dan Gorman crafted handmade oak plaques for the first-place winners.

In addition to awards for the top finishers, there were also a few unique prizes. Hats were off to two noteworthy categories of racers: “Lowlanders” (folks who live below 2,000 feet), and “Sisu’s” (a Finnish term meaning grit, determination, and perseverance), who ran the Dirty 30 as their first ultra race. Those who finished in under ten hours in these categories received special hats.

Awards were also distributed to those who got the bloodiest, those making it to one of the five aid stations first, and best course marshal.

The following winners for age category are listed in first to third place, male or female:

Female, 19 and under – Samantha Smith.

END_OF_DOCUMENT_TOKEN_TO_BE_REPLACED

Where the dead get to tell their story By Jaclyn Schrock On Saturday, August 21, the Gilpin Historical Society held their annual Cemetery Crawl. Tickets allowed the shuttle of hundreds of guests from the Teller House parking lot to the Cemetery. Depending on v... END_OF_DOCUMENT_TOKEN_TO_BE_REPLACED