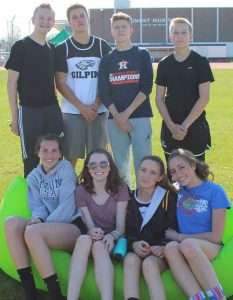 “Nicole Adams jumped 4’6” and placed seventh in the high jump. She also ran the 100-meter dash, placing eighth,” Ball said. “Stephen King jumped 18’1” to place fifth in the long jump and also ran his fastest 400-meter race of the year, placing seventh with a time of 55.6.”

“In total, the Gilpin team racked up 32.5 points in the meet, which is the largest point total for a Gilpin track team since track was reinstated at Gilpin four years ago.”

The Eagles participated in the Joe Shields Invitational on Thursday, May 10; see next week’s edition of the Weekly Register-Call for results.

The Gilpin Eagles’ varsity baseball athletes lost to the Front Range Christian Falcons of Littleton (FRC) in action on the diamond on May 1 on Front Range’s field. The Eagles scored 1 run to the Falcons’ 13 in that conference test.

Gilpin’s Angel Gomez scored the only run in the first two innings. Things picked up a bit when FRC made it across home plate twice in the third inning. The teams held each other from scoring again until the sixth inning, when FRC exploded with 11 runs.

Manny Gomez was Player of the Game for the Eagles, pitching for the lion’s share of the game and striking out 3 batters. He also had 1 hit, 3 assists, and 2 put-outs.

In other Gilpin highlights, Angel Gomez had 6 put-outs, with Josh Trujillo and Will Lorenz following with 3 each. Dallas LeBeau came in with 1 hit.

The Falcons hit 1 homer and achieved 1 double and 1 triple.

Gilpin played Clear Creek on May 3, with results unavailable at press time.

The Eagles were scheduled for a playoff game for the district quarterfinals on Tuesday, May 8, with the opponent still to be announced at press time.

END_OF_DOCUMENT_TOKEN_TO_BE_REPLACED

Benefitting the county, schools, and much more By Don Ireland   This year marks the 30th anniversary of casinos opening in the former little mining towns of Black Hawk, Central City and Cripple Creek, Colorado. In those early years, smoking was allowed inside ... END_OF_DOCUMENT_TOKEN_TO_BE_REPLACED