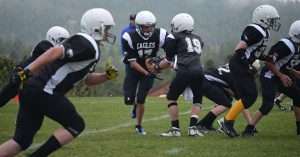 Gilpin Middle School’s Eagles football team trounced the Dayspring Christian Academy (also the Eagles) 50-42 on September 18 in Greeley to remain undefeated this season. Gilpin’s is 4-0 for the season and savors the victory over Dayspring, which has always beaten Gilpin in the past.

The Dayspring Eagles marched the ball quickly down to the 5-yard line on the opening drive. Gilpin Eagle defense tightened up and kept Dayspring from scoring, though, taking the field on its own 5-yard line and getting the ball back down the field to score the game’s first TD. Jamie Alexander made the successful 18-yard run followed by a quick 2-yard run for the 2-point conversion by Alex Wilhelm, making the score 8-0 Gilpin.

Dayspring was never able to tie the game or get the score closer than a touchdown and a conversion. Head Coach Clinton Wenholz remarked, “As the game battled on, our defense bent several times, but never broke. We held off Dayspring when we needed it the most.”

Gilpin’s offense scored every time they had possession, putting up 598 total yards. Wilhelm ran for 316 yards, Alexander for 75. Alexander was also the leader in tackles with 16, and Jake Duncan contributed 12 tackles; Duncan leads the team in tackles for the year with 33. Angel Gomez ran the ball for 65 yards. Will Lorenz passed for 90 yards.

Coach Wenholz praised his team’s performance. “We have been a team that has been exceptional. The amount of work and level of dedication the team has been performing at has been outstanding. Gilpin Middle School football is undefeated for a reason – hard work, dedication, and most importantly, a belief in one another.”

The Lady Eagles varsity volleyball team’s record is 6-6 this season.

The team won over Cornerstone Christian Academy 3-0 on September 16 in an away conference match. Bailey Hanssen led the Gilpin team in kills with 9 of 26 total; Stephanie Siegrist was the leader in serving aces with 9 of 19; Alyssa Chareunsouk was tops in digs with 8 of 19; Chareunsouk also led in serving received success with 13 of 31; Sierra Deleon was first in ball handling assists with 22.

The Lady Eagles were disappointed 3-2 in their conference match with Denver Waldorf on September 18 at Gilpin’s home net. Leading Gilpin in kills was Siegrist with 10 of 29; Deleon was first in serving aces with 4 of 15; Chareunsouk led with 32 digs of 111; Deleon contributed 17 ball handling assists; and Alex Martin had 20 successfully received serves of 71.

Gilpin was also defeated by Longmont Christian 3-2 in an away non-conference match on September 19. Leading players were Siegrist with 9 of 24 kills; Chareunsouk with 5 serving aces, 20 of 79 digs, and 32 of 76 successfully received serves; Deleon had 14 ball handling assists.

Cornerstone Christian Academy handed the Lady Eagles another loss September 26 in an away conference game. The score was 3-0. No statistics were available.