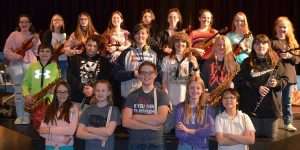 Gilpin County sixth through ninth-grade students presented an ambitious and variety-laden musical offering last Thursday evening, May 16, in the Gilpin School auditorium. It was one of the best programs the growing music department has offered in a number of years.

Music teacher Randi Ebers greeted the guests and announced a new, exciting fundraiser coming this summer – a 4th of July Barn Dance from 1:00-9:00 p.m. at the Gilpin County Fairgrounds. The program will feature groups such as The Railsplitters, Ragged Union, and members of Trout Steak Revival. Arts and crafts, food booths, a kids’ tent, and fire engine rides will round out the days’ entertainment. 100 percent of profits go to the Gilpin County School music programs. Tickets will go on sale May 21 at peakmusic.org.

The middle school band opened the program not with tones from the brass and winds but with rhythmic clapping and stomping on “Rock Talk.” The young musicians literally turned their bodies into percussion instruments, and Ebers assured the audience the coordination of hands and feet was harder than it looked.

Small string and wind ensembles were featured on the Muppets’ “Rainbow Connection,” the Beatles’ “Eleanor Rigby,” “Beauty and the Beast,” and “Hedwig’s Theme” from the Harry Potter films. “Beetle Bop,” originally for saxophone quartet, had been arranged for sax, clarinet, and two trumpets, with improvised backup on drums.

Intermission provided an opportunity for patrons to visit the art tables in the atrium. Art teacher Curt Halsted explained that his students had crafted a diversity of animal pots, hand-thrown bowls, lidded vases made either by hand or on the potter’s wheel, and animals shown metamorphosing into other creatures.

“You come to an art show to be inspired,” Halsted said. “It’s beautiful, and it makes you think. Good job, everyone!”

He pointed out that the pottery had received first, second, or third place ribbons or honorable mentions and said the art could be left at school and displayed at the summer art show if the students desired.

The new show choir got the second half off to an upbeat start with “Riptide,” followed by One Republic’s “Counting Stars.” A stage backdrop of exploding fireworks added to the effect as the seven-member group dispatched their tunes with energy and enthusiasm. Ebers said any student was welcome to join and added that most of the harmonies were arranged by the singers themselves.

The main choir belted out Pink’s rock anthem, “Get the Party Started,” then took a journey back in time with the medley “Back to the Fifties.” Parents, grandparents, and singers alike grooved to “Jailhouse Rock,” “Peppermint Twist,” “Da Do Ron Ron,” “Rock Around the Clock,” and others from the classic age of rock ‘n roll.

The ensemble celebrated 100 years of Disney magic with “Musical World of Disney,” a montage of favorites from “Beauty and the Beast,” “Mary Poppins,” “Cinderella,” “Pocahontas,” “Aladdin,” “Tarzan,” and other films. Several students were highlighted in solos.

The program ended with the feel-good “Zip-A-Dee-Doo-Dah.” The audience loved the performance and gave the choir a long, well-deserved round of applause.

END_OF_DOCUMENT_TOKEN_TO_BE_REPLACED

Benefitting the county, schools, and much more By Don Ireland   This year marks the 30th anniversary of casinos opening in the former little mining towns of Black Hawk, Central City and Cripple Creek, Colorado. In those early years, smoking was allowed inside ... END_OF_DOCUMENT_TOKEN_TO_BE_REPLACED