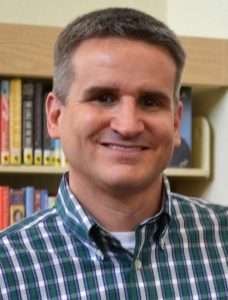 New director is “off the shelf” about both people and publications

Henry Ward Beecher realized that “a library is not a luxury, but a necessity.”

We in Gilpin County are fortunate to have a gem of a library enriching the heart of our community. The Gilpin County Public Library, acclaimed as a top rural library in Colorado, is itself fortunate to have recently hired a top-notch director to guide patrons seeking the best in enthralling fiction, educational materials, thought-provoking films, children’s literature, and much more. The library staff, headed up by new director Michael Carlson, will be glad to help you find anything you need.

When we visualize a librarian, we are apt to think of someone who spends most of the day checking books in and out and maintaining a tomblike silence with a raised finger and a stern “shhh!”

Michael Carlson is one librarian who dispels this old stereotype. The Texas native is knowledgeable, helpful, friendly, and even talkative.

“I grew up in libraries,” he recalls. “As much as I read – usually a book a week – my family couldn’t have afforded all the books! I loved libraries.”

Many of us can identify. It’s a place to get an education, to travel anywhere in the world for free, and to visit and revisit those friends between the pages.

Carlson’s journey to Gilpin County included a full circle around the USA, from Michigan to Texas, Maryland, Montana, and finally, Colorado. His father worked for the Ford Motor Company in the 1970’s but got laid off when son Michael was only two. Texas was booming with oil, so the family relocated to Mesquite, a suburb of Dallas, where Carlson grew up.

He got turned on to library work as a career after he earned his BA degree from the University of Texas at Arlington. He had initially considered becoming a teacher and got his feet wet by doing some substitute teaching at a middle school.

“I quickly learned that that was not what I wanted to do!” he laughs.

Instead, he did a lengthy stint as a substitute librarian. “I fell in love with it. I went back and got a master’s in library science from the University of North Texas.”

Carlson had worked his way through college with a job at United Parcel Service, which had a college reimbursement plan. The plan enabled him to go for his master’s degree at the University of North Texas. While he worked on his degree, he got practical experience.

“I was lucky enough to get a second job in Mesquite as an assistant librarian,” he explains. “It was a starter job, basic learning from the ground up. I built my reference skills, and also honed my ‘people skills’ through helping patrons to use the Internet, which was new at the time.”

Carlson served there for five years and was then ready for the next chapter. He and his wife Nancy love to travel and were geared up to see more of the country. Also, Carlson is a history buff, so he and Nancy decided to move to the Northeast region to be closer to Civil War battle sites. In keeping with these interests, Carlson accepted a position as a librarian with the Frederick County Public Library in Frederick, Maryland.

“We had eight branches and two hundred employees,” he recollects. “I started off as librarian at one of the branches. I enjoyed helping people one-on-one, but the library system was expanding at the time. I was recommended to be an assistant branch manager, so I got into the management side of libraries.”

Most of Carlson’s experience was gained during this phase. He managed a small library of 2,500 square feet and then went to the newest branch in Brunswick, Maryland, which covered 15,000 square feet and housed 40,000 items.

After eight years, Carlson felt it was time to try his hand at a bigger opportunity. He and Nancy were also eager to leave the congested Northeast. The couple was drawn to the West when they vacationed in Colorado a couple of years ago. Their relocation to this region began with a move to Billings, Montana, where Carlson became the assistant director at the Billings Public Library. He worked there for nearly a year, supervising 22 employees, working with trustees and city councils, and in short, having fun doing it.

“I discovered that I really wanted to manage my own library, though,” he notes. “And we wanted something specifically in Colorado in a smaller town.” He saw the Gilpin County opening posted on library sites and grabbed the opportunity.

“I applied and came for the interview and got the grand tour of community, including the Sundance Café and the Rec Center.”

Carlson was hired and started on September 7; he is now focusing on some new programs, as well as some familiar favorites.

A new emphasis is inviting teens to some programs just for them. The library is partnering with Gilpin’s CSU Extension on a grant application for robotics materials through the Alan Green Memorial Foundation.

“We were looking at ways to get more teens in here,” he says. “I was approached by (CSU Extension Director) Irene Shonle. She brought this up and wanted to partner, and it just worked out.”

The teen sessions are being held on the second and fourth Thursdays of the month after school. Until Carlson finds out whether the grant is approved, the Gilpin County Board of Trustees has offered up to $1,000 for the program. Other programs for teens, including art, are being considered.

The library is in the midst of a five-part series on financial education called Common Cents for Colorado. Although offered in the past, it is still drawing a good-sized group of participants. The Gilpin Library was selected as one of thirteen prestigious Colorado libraries to receive a grant for this series.

The artist-in-residence program will be back for its tenth year, and the Friends of the Gilpin County Library group has devoted some funds for a summer concert series. Carlson gave a heads-up that new artists and musicians will be sought.

He is enthusiastic about the possibility of doing some upgrades to the children’s area. The library received a $21,000 donation several months ago from an estate; with the funds, it may be possible to install new shelving, purchase early literacy interactive toys, and open up the main floor area to accommodate increased patronage for story time. Carlson hopes to get a Lego table so the kids can use their imaginations and socialize.

For those looking to curl up by the fire with cocoa and a good read, Carlson recommends the Jack Reacher fiction thriller series by British author Lee Child or the Walt Longmire Western mystery series by Wyoming writer Craig Johnson, popularized on Netflix. Children can’t get enough of Star Wars stories and novelty books or “Diary of a Wimpy Kid” books by Jeff Kinney.

Carlson relates that the best part of his job is getting to work with the public again. “I sat behind a desk all day at my previous job. I didn’t get to talk with the patrons and find out what they were reading and help them with computer questions. I’m more of a people person, and I feel more fulfilled when I get people’s feedback.”

Like any true librarian, Carlson has his favorite titles: “Truman” by David McCullough, “Great Expectations” by Charles Dickens, and “The Winter King” by Bernard Cornwell.

“Cornwell is a great historical fiction writer,” Carlson says of the author of this mythic saga of King Arthur. “And ‘Great Expectations’ is the classic rags to riches story that has stood the test of time.”

Carlson is grateful for the good mentors he has had in his working career, including Bill Cochran, who has served in libraries for over thirty years and is the director of the Billings Public Library.

“He gave me the confidence that I could become a library director. He supported me and gave me opportunities. I learned that there are a lot of facets to library directing, including a political side,” Carlson says.

To prove his point, he notes, “As soon as I got the job here, I jumped into the budget. In my first month here, I needed to learn what funding to ask the commissioners for. I also needed to collaborate with the library board on strategic planning.”

When he is not busy as a page master, he enjoys getting out in nature and traveling throughout the country and overseas. The Gilpin location affords opportunities for those outdoor pursuits and provides close proximity to DIA and big-city amenities, including major league baseball, which he is also keen on. “Our geriatric cat, 16-year-old Peanuts,” completes the family.

END_OF_DOCUMENT_TOKEN_TO_BE_REPLACED

Where the dead get to tell their story By Jaclyn Schrock On Saturday, August 21, the Gilpin Historical Society held their annual Cemetery Crawl. Tickets allowed the shuttle of hundreds of guests from the Teller House parking lot to the Cemetery. Depending on v... END_OF_DOCUMENT_TOKEN_TO_BE_REPLACED