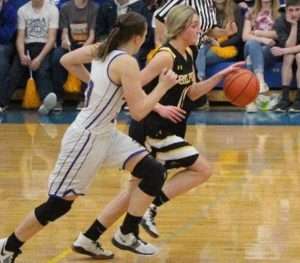 At the Regional Playoffs vs Simla Cubs

Last Friday, March 6, Gilpin’s Lady Eagles ended their basketball season competing in the opening round of the 2020 2A girls’ basketball regional playoff tournament for Region 7. In assessing the 2019-2020 season, Head Coach Jeffery Schuessler said, “I think we peaked at the end of the season, which is ideal. It was an interesting group of seniors and freshmen that spent most of the time on the floor for the varsity, and it took us a couple months to figure out the best rotations, roles, etc. for the team. In the end, I was mostly impressed by the players putting in extra shooting work, being committed to the team by consistently showing up for practice and giving their best, and taking on roles that involved less playing time. It was a selfless group of players and they were fun to coach.”

The Eagle’s regional tournament game was played versus Simla High School on their home court in Simla, CO at 3:00 pm. Coach Schuessler had the following comments about the game. “It was, first of all, a great experience for our team. It was nice to see our seniors finally get a chance to experience a regional tournament – it was good for our underclass players to get a taste, too. Hopefully, they are hungry to return. We played well at Simla with the exception of the third quarter. For some reason, we struggled several times this year in the third quarter – something I need to figure out for next year. Outside of that quarter, we played more or less even with Simla the rest of the game. We had a few outstanding individual efforts, but I would point to senior Lena Warren, who played great defense and was our leading scorer in the game, as the real standout.”

In the 1st quarter of the game the Eagles outscored the Cubs by 1 point on a score of 6-5. Camryn Ganz (22) opened the scoring with a free throw as the Cubs responded with a 2-point field goal. Samantha Smith (2) returned with another free throw tying the score at 2-2. The Cubs completed the quarter with a free throw and a 2-pointer while the Eagles completed a 2-pointer of their own by Lena Warren (11) along with 2 free throws by Jessica Wilhelm (30) ending the period on a score of 6-5 Eagles.

The 3rd quarter did not turn well for the Eagles who scored only 2 points both from free throws by Skyley Ramsey (12). The Cubs on the other hand scored 12 points via 6 2-point field goals increasing the score to 19-33 in favor of the Cubs.

Congratulation to the Lady Eagles for a respectable basketball season with 14 wins to 9 losses overall, and for making it to the Regional playoffs. With several of this year’s underclass team members having become veteran varsity players and a number of prospects moving up from middle school, we look forward to the next few seasons with great anticipation.

END_OF_DOCUMENT_TOKEN_TO_BE_REPLACED

Where the dead get to tell their story By Jaclyn Schrock On Saturday, August 21, the Gilpin Historical Society held their annual Cemetery Crawl. Tickets allowed the shuttle of hundreds of guests from the Teller House parking lot to the Cemetery. Depending on v... END_OF_DOCUMENT_TOKEN_TO_BE_REPLACED