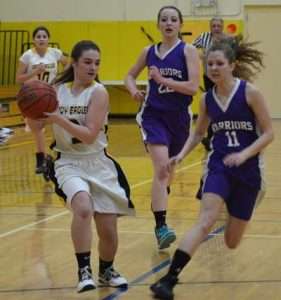 In a hot Class A District 8 battle rife with turnovers, the Gilpin High School girls’ varsity basketball team defeated Jim Elliot Christian (Englewood) 38-29 on February 24. The Eagles’ home court was rocking from start to finish during a game that was almost too close to call until the final moments. Gilpin held out against a stronger rival; Jim Elliot’s (JEC) season record is 15-6. The Eagles are now at 9-11 for the season.

Jim Elliot (JEC) started the scoring with one point on a free throw, followed by a two-pointer. Julia Blohm answered with the first two-point basket for Gilpin, and Daria Simon quickly dunked another for good measure. JEC was the leader 5-4 at the end of the first quarter.

The Eagles put two points on the board right away in the second period. As the players scrambled for control of the ball, fouls were made, and JEC managed a few free throws to add points to their score. But Gilpin shot a three-pointer, and Khristine Barr pulled off a shot to tie the score at 11-11. Another quick basket brought the contest to 13-11 Gilpin.

As the second half began, performance nerves combined with intense defensive pressure from both teams caused multiple turnovers. The ball was pretty much a loose cannon.

Gilpin put up several quick points in the first two minutes of the half, bringing the score to 20-15. JEC caught up to within one point due to successful free throws. The score was 22-21 Gilpin going into the fourth quarter.

The Eagles pulled ahead a little at a time, with one 2-pointer and a free throw. JEC then brought the score to a 23-23 tie, but Gilpin answered with a three-point basket to bring the contest to 26-23.

Gilpin pleased the crowd with 16 points in the final period. The closing minutes proved to be a contest of free throws, as the Eagles’ Alyssa Chareunsouk, Berkley Davis, and Delainey Lepro alternated with JEC players. It was Lepro who put up the final free throw, to bring the game to a 38-29 conclusion.

“I’m really proud of the way our players stuck it out,” said Coach Jeff Schuessler. “There was a lot of adversity. Several of the players got huge free throws and great shots. It was a fantastic team defense, and many contributed to the win.”

Chareunsouk put up 9 points for the Eagles, followed by Lepro with 8, and Barr, Blohm, and Stephanie Siegrist with 6 each. Lepro shot 2 three-pointers and Chareunsouk 1. Top free-throw shooters were Chareunsouk with 4 and Lepro with 2.

The team meets Rocky Mountain Lutheran (19-2 record) at the District 8 championships at Arvada K-8 on Saturday, February 28, at 6:00 p.m.

Gilpin was also successful as they took on Cornerstone Christian Academy (Westminster) in a home playoff game on February 21. The Eagles beat Cornerstone (CCA) 36-25 in another close match.

The first quarter closed in a 10-10 tie, with both teams keeping the pressure on through the second quarter. Going into halftime, the score was 19-17 Gilpin. Gilpin kept up the pressure throughout the second half, scoring 17 points to CCA’s 8 to win.

Top scorer for the Eagles was Lepro with 11, including one three-point field goal. Siegrist followed with 10 and Chareunsouk with 8. Chareunsouk also made good on 4 free throws.

Barr, Blohm, Davis, and Chareunsouk each had 2 assists.

Siegrist was the leader in steals with 4, and Davis contributed one block.