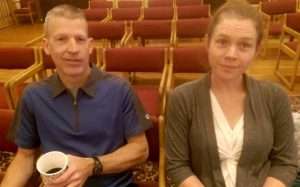 The first item on the agenda was postponed after a 5 minute discussion. Commissioners commented from having read through the intergovernmental agreement between Clear Creek County and Gilpin County to provide shelter for both counties’ lost or adoptable animals being located in Clear Creek so supervised by their Sheriff found concerns. It’s unclear regarding shelter and impounding 10 days which could be followed by euthanasia. The Board intends to arrange opportunities to have representatives from both boards to construct agreeable terms of this agreement. This appeared to be the first time the agreement has been renewed since it was created some years ago. Gilpin Commissioners had the impression this was a “no kill” shelter, so a better understanding will be coming to complete the renewal agreement.

As of August 7, 2017 Alan Smith stepped in as interim Parks and Recreation Director with the retirement of Kathi Lambert who served for 13 years. His highest priority was to build stability. Smith’s initial intention is to build this stability by developing an organizational structure that provides a positive, productive work environment and promotes a collaborative, service-oriented culture. So far, the Gilpin     Recreation team has:

–Updated/revised the Assistant Coordinator (Joline Logan) job description to be the new Office Manager position and assume additional personnel and management responsibilities at the front desk.

The next logical step is the full-time with benefits position of an office assistant, replacing two part-time positions.

The Board heard comments from Smith, Parks and Recreation Office Manager Joline Logan, and Human Resources Manager Susan Allen to realize the potential of the full-time position switch from some current part-time positions. Budget comments regarding the position clarified this motion, with reminders that a better time to discuss budget was set for tomorrow between the Commissioners and Parks and Recreation Department. The motioned passed to approve a second full-time office assistant with a 2 of 3 approval. Gail Watson was not convinced this was the best move for the County.

Paper work was compiled by County Treasurer Alynn Huffman, while the presentation was made by Chief Deputy Treasurer Mary Lorenz. All figures showed about a $2 million dollar increase from last year’s figures and opportunity to fund County departments.

Boundary Line Elimination #17-06 has been postponed.

The board did approve the Request For State Approval of Plan. This collaborative plan is in effect October 1, 2017 through September 30, 2018, submitted by Jefferson County. Jefferson County provides CHAFEE Foster Care Independence Program services to Gilpin County. The approval allows coordination and administration conforming with provisions of the State Department rules and plan requirements.

The Board gives approval to Ballot Issue 1A. The Board wants to simply demonstrate to Gilpin voters the opportunity to obtain tax revenue for Gilpin County on the first sale of unprocessed marijuana produced by three potential Retail Marijuana Cultivation Facilities located in Unincorporated Gilpin County. Ballot Issue 1A has the potential to generate tax funds for our county’s general fund (permitted by CRS 29-2-144), without raising residential taxes.

Ballot Issue 1A is on the November 7, 2017 Gilpin County ballot. It is not about the recently approved commercial grow opportunities made by the Commissioners. The ballot issue only askes voters to be able to tax the first time the product is sold by the commercial grow operations, once they become established. There are currently no (legal) operations producing marijuana in Gilpin County, however, one operation has requested to begin growing.

Church Ditch Water Correction Deed is a correction to a 2011 deed. A legal description error was corrected in this deed relating to a settlement Gilpin County had with the City of Arvada.

County Attorney Jim Petrock will begin to testify as a witness tomorrow for Federal Court in Denver. He is representing three Gilpin County public servants who received requests for funds and some harassment regarding a refusal to pay funds to a small group of individuals.

The Board discussed their schedule at this point in the agenda. Breakfast with five County Commissioners is in Idaho Springs Wednesday, October 18th. Coffee with the Commissioners at the Gilpin Community Center is this month also. There are four more regularly scheduled Commissioners meetings in 2017: October 31, November 14, December 5, and December 19.

Commissioners accepted the recommendations of Bill Harrington of Alpha Services regarding contracts for asbestos abatement in two locations, and painting and flooring to improve working conditions in the two-story stone building at 203 Eureka Street in Central City. To explain the results of bidding by contractors for the work on the old Court House, two men with Gilpin County Public Works Department provided information. Gordon Thompson, formerly Facilities Operation for Gilpin County, now Public Works Director was with Harrington detailing negotiations for the commissioners. Thompson has replaced Director Bill Paulman who retired near the beginning of September.

There were concerns about the painting bid, since only one was received. Two more have been requested to be able to make a decision. Asbestos abatement is to begin first, followed by painting, and then flooring to the building first built in 1900 and most recently improved in 1999.

Klushmire hopes by the October 31 Board meeting to provide a Director candidate for the Parks and Recreation Department. She will also make arrangements to coordinate the inclusion of the Cooperative Extension staff who currently are not able to use the Community Center Resources for health and fitness as other Gilpin County employees do.

The motion was approved to accept the bid for new microphones in the echoing room where the Commissioners meet. This has been approved in the budget, though amplifying has not been approved. The likely solution to this difficulty to be heard and understood may require better acoustics, not more amplification. No bids for improving acoustics were available.

With no discussion or changes, regular meeting minutes from September 26 and special session on October 6th were approved.

The next Gilpin County Commissioners Board meeting will be 9 am, Tuesday, October 31, 2017 in the upstairs room of the old Courthouse at 203 Eureka Street in Central City.

END_OF_DOCUMENT_TOKEN_TO_BE_REPLACED

Where the dead get to tell their story By Jaclyn Schrock On Saturday, August 21, the Gilpin Historical Society held their annual Cemetery Crawl. Tickets allowed the shuttle of hundreds of guests from the Teller House parking lot to the Cemetery. Depending on v... END_OF_DOCUMENT_TOKEN_TO_BE_REPLACED