Gilpin’s Elementary had a Spring Fling 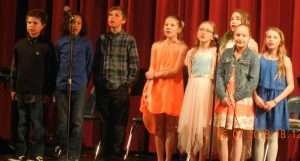 Lower and Upper Elementary sing their hearts out

When the lights start to dim and curtains open, the show must go on. On Wednesday, May 2nd, lower Elementary and Montessori kids performed their adorable Spring Fling concert, stealing the hearts of everyone there.

With a snow storm rolling into the high country, the upper Elementary concert was moved to Monday, May 7th. The band and choirs made up for the delay and took the audience on a musical journey in endearing way.

The upper Elementary concert was a great show. The band took the stage first, made up of fourth and fifth graders who performed songs with the help of Bobbi Hill who did a great job helping them.

The Fourth Grade class highlighted the history of Colorado with an arrangement of songs about the history. That was just a sneak peek of the larger show to come on Colorado history which will be performed by the Fourth Graders on May 24th at the school.

To close out the upper Elementary show was the Fifth Graders who also performed a song on history. However it was a hilariously song on the history of duct tape. The Fifth Graders ended the program with a show stealing “Can’t Stop the Feeling” by Justin Timberlake with a dance included.

The lower Elementary concert was one that tugged on the heart strings. Full of adorableness as it ranged from grades Pre-Kindergarten to Third Grade. Pre-K was up first as they performed mini plays such as “Teddy Bears Picnic.” Kindergarteners performed a mini play as well called “Under the Big top” which was circus-themed and full of cuteness. The upper Elementary class didn’t have the only show that included some history. The lower Elementary kids went back in time as the Second and Third graders performed some traditional folk dances. Third Grade ended the show with a traditional folk song that originated from India.

Both of these Spring Fling concerts were not just about the music – it was also a night to highlight the young fine artists in the making with some of their amazing art workpieces ranging from snowmen to the tropical sea turtle. Thank you to Superintendent Dave MacKenzie and the Elementary Principle Heather Huntoon for allowing the Spring Fling concerts and art shows to happen, and to the parents who support their kids in everything.