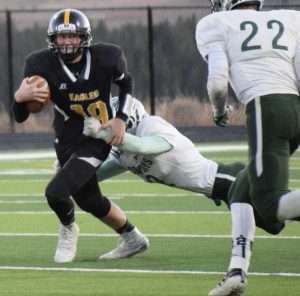 Last Saturday’s football game was played under the lights on the Gilpin County High School Eagles home field, versus the Plateau Valley High School Cowboys. The game started at 6:00 p.m. with the weather chilly, but tolerable due to no appreciable wind chill factor. The game began as the Cowboys received the kickoff with a fumble and then falling on the ball on their own 43-yard line. On the third play of the game the Eagles forced a Cowboy fumble, which was recovered by the Eagles on the Cowboy’s 44-yard line. The Eagles took advantage of the turnover with a 43-yard, 11-play drive to the Cowboy’s 1-yard line trailed by a touchdown by Blake Boulter (19) on a quarterback keeper. The TD was followed-up by a pass to Kameron Brewer (8) in the end zone to complete a 2-point conversion making the score Eagles 8 to Cowboys 0. The remainder of the 1st quarter consisted of two possessions by each team, neither of which was able to score.

The 2nd quarter opened with the Eagles in possession of the ball with a 1st and goal on the Cowboys 5-yard line. Four plays later the Eagles were finally able to punch the ball in with a Boulter (19) QB run up the middle. After an unsuccessful 2-point conversion attempt the game score stood at 14 to 0. The Cowboys answered the following kickoff with a 12-down drive from their own 12-yard line to the Eagles 44-yard line. On the 13th play of that drive the Eagle’s Stephen King (2) intercepted a Cowboy’s pass on the Eagle’s 38-yard line and carried the ball for a 62-yard touchdown, the team’s first pick-six of the season. With a subsequent 2-point conversion run by King (2) the score computed at 22 to 0. After another Cowboy 12-down drive the Eagles forced a turnover on downs. On the first play after the turnover Boulter (19) completed a 22-yard pass to King (2) who delivered on a 68-yard touchdown play with 11 seconds remaining in the half. Following a failed 2-point conversion attempt the half ended with a score of Eagle’s 28 to the Cowboy’s 0.

On a Cowboys short 2nd half kickoff the Eagles fell on the ball on the Cowboy’s 46-yard line. On the first play of the Eagles ensuing possession, King (2) ran the ball up the middle for a 46-yard TD. The Eagle’s failed a 2-point conversion attempt when their quarterback was sacked leaving the score at 34 to 0. There was no further scoring during the 3rd quarter although the Cowboys retained possession of the ball for 16 downs, after the Eagle’s kick, ending in a turnover on downs. The Eagles possessed the ball for the next nine downs to end the quarter.

After continuing to retain the ball for the first six downs of the 4th quarter, the Eagles attempted a punt that went out-of-bounds on the Cowboy’s 34-yard line. The Eagle’s defense stepped-up to hold the Cowboys to a four down turnover on their own 38-yard line. On the Eagle’s third play of their subsequent possession, Jessie Alexander (99) took the handoff and sprinted 33 yards up the middle breaking two tackles and dragging a third tackler across the goal-line for the Eagle’s final touchdown of the evening. After a fumbled 2-point conversion attempt, the score was Eagles 40 to the Cowboys 0, triggering a running clock for the rest of the 6 minutes and 43 seconds of the game. The Cowboys ended the game with a 4-down effort, including several incomplete long pass attempts.

The team celebrated their first League win by dumping the icy contents of the water cooler on a dodging Coach Ball. Pleased with the outcome of the game, Coach Ball later said, “The first win on our new field feels great. The way these boys tackled and ran to the ball on defense was so fun to watch. We have made it a point of emphasis to improve our tackling and our boys really showed off by keeping PV scoreless. I’m so proud of this team and the way they have bounced back from adversity during the year and tonight’s win was a real display of their hard work and determination.”

The Eagles next game will take place against the Vail Christian High School Saints on Thursday, 17 October at 7:00 p.m. on the football field at Battle Mountain High School, 0151 Miller Ranch Rd, Edwards, CO 81632.

END_OF_DOCUMENT_TOKEN_TO_BE_REPLACED

Benefitting the county, schools, and much more By Don Ireland   This year marks the 30th anniversary of casinos opening in the former little mining towns of Black Hawk, Central City and Cripple Creek, Colorado. In those early years, smoking was allowed inside ... END_OF_DOCUMENT_TOKEN_TO_BE_REPLACED

Benefitting the county, schools, and much more By Don Ireland   This year marks the 30th anniversary of casinos opening in the former little mining towns of Black Hawk, Central City and Cripple Creek, Colorado. In those early years, smoking was allowed inside ... END_OF_DOCUMENT_TOKEN_TO_BE_REPLACED