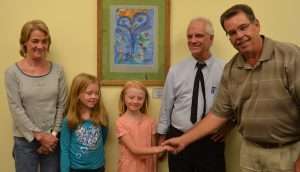 The Gilpin County Board of Education met September 2. Members present were President Craig Holmes, Charlotte Taylor, and Steve Boulter. Brook Ramsey and Kersten Armstrong were absent. Superintendent Dave MacKenzie and Secretary to the Board Robin Cortez were also present.

Art instructor Curt Halsted was present to tell the Board about a new art program, entitled the Gilpin RE-1 Board of Education Artist Recognition Program. Each month, the art department will feature a particular student’s art work. That student’s work will be put on display in the Board meeting room, and all art works will remain on display in the meeting room throughout the year.

The first honoree was third grader Sterling O’Sullivan, whose art was on display at the Gilpin County Art Gallery this past summer. Sterling’s art featured a heart-shaped object done in shades of blue. Halsted asked the young lady, “What did you want to show in your painting?” In response, she pointed to her masterpiece and replied simply, “That.”

The Elementary School welcomed Senator Michael Bennet for a brief tour on Thursday, August 28. Boulter noted, “He made every quick handshake he could,” and Taylor added that Bennet enjoyed visiting with the students.

Board members commented on recent volleyball and football games, saying that the teams played hard.

The Board will host the staff breakfast on Friday, September 12 at 7 a.m. Holmes volunteered to flip the pancakes. MacKenzie advised that permission to use the school cafeteria would need to be gained.

MacKenzie presented a draft of the 2014-15 recommended charges for the District Accountability Committee (DAC). The charges are to monitor, review, and make recommendations for the following: teacher evaluation (Senate Bill 191); Unified Improvement Plans for elementary, secondary, and the District; nurturing student ownership of their learning outcomes; nutrition and wellness; and the Gifted and Talented program delivery.

Holmes recommended adding a charge regarding graduation requirements and college and career readiness.

Holmes also said that a food service audit will be performed within the next few months and that the audit should be made part of the DAC report.

MacKenzie and Holmes will meet with the DAC on September 15.

The Board reviewed several policies on first reading, including those regarding federally-mandated family and medical leave, public’s right to know/freedom of information, health and family life/sex education, preparation for postsecondary and workforce success, grading/assessment system, graduation exercises, and teaching about controversial issues, among others. Policy content is recommended by CASB and/or required by state and federal law.

The Board discussed the Family and Medical Leave (FMLA) policy’s provision stating that Colorado’s Family Care Act (FCA) entitles employees to take twelve weeks of unpaid leave to care for the employee’s “partner in a civil union” or “domestic partner” with a “serious health condition.” Leave taken under the FCA is in addition to the leave employees may take under the FMLA, which is also twelve weeks. The two periods of leave are not concurrent; rather, the total is for 24 weeks. Holmes asked that MacKenzie contact the District’s attorney for a supplement to the policy clarifying that the leave periods are not concurrent, prior to the policy’s second reading.

The Board examined the policy on the public’s right to know and freedom of information. State law permits school districts to charge up to $30 per hour for staff time spent in research and retrieval of public records. The Board decided $30 was a fair charge, along with an additional fee of 25 cents per photocopy.

The policy on health and family life/sex education was also reviewed. State law provides districts with the option of not requiring parents or guardians to state a reason when requesting exemption from any or all portions of the district’s health education curriculum, and the Board elected to utilize that option. An exemption will be granted on written request at least five school days in advance of instruction, and the teacher will develop an alternative activity for the student.

The Board reviewed the policy on preparation for postsecondary and workforce success. State law requires the District to assist students with the development of individual career and academic plans (ICAP). The District’s ICAP plan includes ensuring that all students, beginning in the eighth grade, will be assisted in developing an ICAP. All sixth grade students will register for an account with College in Colorado, and sixth and seventh grade students will participate in preliminary career search. Beginning in eighth grade, students will begin preparing resumes and practicing interview skills, and students in upper grades will attend college fairs, match career objectives with education plans, apply for federal student aid, and apply for scholarships, among many other requirements.

The policy on grading and assessment systems included a provision that peer grading of student assignments is permissible, with “the intent to teach material again in a new context and to show students how to assist and respect fellow students.” The meaning of this is that students would be permitted to check one another’s papers. MacKenzie recommended that this provision be stricken, as he said a student would be unable to determine whether fellow students had met the requirements. Taylor responded in favor of the provision, saying she would be hesitant to recommend limitations on situations that she couldn’t foresee.

The policy on graduation exercises noted that the ceremonies would be secular in nature and not include any school-sponsored prayers or other religious activities. Interested students and their families would be allowed to plan and organize religious baccalaureate services, but the school district would not provide funds or be identified as sponsoring or endorsing such services. Attendance would be voluntary.

MacKenzie advised that current student enrollment for pre-K through twelfth grade is 426, but students are still coming and going. He said the funded student count in October is projected to be 383, which is where the school was last year.

The telephone system has been upgraded to a more modern system. “There are still a few problems at the front desk switchboard,” MacKenzie said, “but we can call 911 and make an ‘all call’ throughout the building if there is an emergency.”

Addressing the subject of infrastructure upgrades with the District’s new fiber optic system, MacKenzie said information is being transferred from old to new servers. He admitted that the process is behind schedule, but said the next part of the upgrade, software installation, will add updates and improve communication.

He said the District has been subscribing to video streaming services with Common Core content and told the Board that there are two bad drivers on the server that will be changed.

“The good news on the upgrades is that they are projected to last for seven to ten years,” he stated.

The next meeting will be held on Monday, September 15, at 7 p.m.

END_OF_DOCUMENT_TOKEN_TO_BE_REPLACED

Benefitting the county, schools, and much more By Don Ireland   This year marks the 30th anniversary of casinos opening in the former little mining towns of Black Hawk, Central City and Cripple Creek, Colorado. In those early years, smoking was allowed inside ... END_OF_DOCUMENT_TOKEN_TO_BE_REPLACED