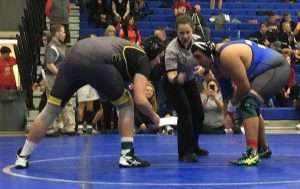 This week’s tournament at Sheridan High School had many larger schools and a high level of competition. With schools much larger than ours, the boys still walked away placing in both of their weight classes. Freshman William Siegrist, placed fifth inheavyweights. Will had a match against Christop Kennemer. Siegrist was tied in points at 2 each, when he pinned his opponent in the second period. Will got his first win of his high school career.

Overall, the boys worked hard. Kamron is now 8-5 on the season and William is 1-10. After Christmas break they will be back in practice preparing for their next tournament in Colorado Springs where we look forward to the return of injured Senior Mike Wenholz. Mike is coming off an injured MCL that’s kept him sidelined through December. Mike’s powerhouse style wrestling will surely be exciting to watch again as he makes a final push to State this February.

END_OF_DOCUMENT_TOKEN_TO_BE_REPLACED

Benefitting the county, schools, and much more By Don Ireland   This year marks the 30th anniversary of casinos opening in the former little mining towns of Black Hawk, Central City and Cripple Creek, Colorado. In those early years, smoking was allowed inside ... END_OF_DOCUMENT_TOKEN_TO_BE_REPLACED