Gilpin wrestlers off to a great season 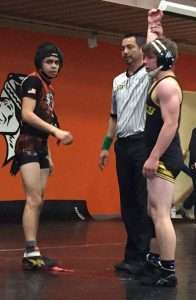 This week’s tournament was great for the Gilpin wrestlers. The team walked away with multiple wins in very large brackets. To start off the day, Kamron Brewer won his first match against Dillion Batterton from Lamar High School. He followed that with another win against Colton Dennison from Byers High School. His third and final match was against a wrestler from Kiowa High School, and the combined results set him up get third place at the tourney in his weight class at 113 lbs. – not bad for a first year high school wrestler!

The Gilpin Wrestling team continues to show promise for a great season. Currently they are back in practice preparing for their next tournament at Gilpin High School on Saturday, February 2nd. Come on over and watch some exciting, fast-paced grappling action right here at home!

END_OF_DOCUMENT_TOKEN_TO_BE_REPLACED

Benefitting the county, schools, and much more By Don Ireland   This year marks the 30th anniversary of casinos opening in the former little mining towns of Black Hawk, Central City and Cripple Creek, Colorado. In those early years, smoking was allowed inside ... END_OF_DOCUMENT_TOKEN_TO_BE_REPLACED

Where the dead get to tell their story By Jaclyn Schrock On Saturday, August 21, the Gilpin Historical Society held their annual Cemetery Crawl. Tickets allowed the shuttle of hundreds of guests from the Teller House parking lot to the Cemetery. Depending on v... END_OF_DOCUMENT_TOKEN_TO_BE_REPLACED