Gilpin Wrestlers have best tournament yet in Lyons 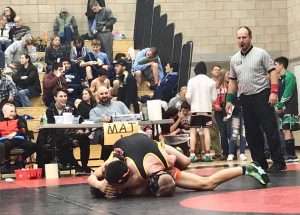 On the mat after Christmas break

Saturday, January 5th, was a huge day for the Gilpin wrestlers in the first tourney of New Year. With 22 schools competing, including the 5A Ralston Valley School, the team took home multiple wins. Overcoming a few obstacles, the team was able to achieve success in multiple weight classes.

This week’s tournament in Lyons, Colorado was a huge success for Gilpin wrestlers. The team took home multiple wins and placed in two different weight classes. Angel Gomez started of the day with a win against Angelo Bernal from Northglenn, Colorado. Soon after, he won again against Jean Luke Barkley from Fort Collins.

Mike Wenholz also had a great day, winning four out of five matches. Starting first with Ethan Terch from Erie, Colorado, this ended up being one of his quickest pins – taking only 31 seconds. In his next match, he made another quick pin against Devin Chambers from Northglenn, Colorado which took him 44 seconds. His last two wins were against Jeremiah Pacheco from Milliken, Colorado, then Joel Blair who was also from Milliken. Overall he placed 2nd in his weight class of 132 lbs.

Overall, the team did very well in this week’s tournament. The team is back in practice getting ready for their tournament this Saturday, January 19, in Strasburg, Colorado.

END_OF_DOCUMENT_TOKEN_TO_BE_REPLACED

Where the dead get to tell their story By Jaclyn Schrock On Saturday, August 21, the Gilpin Historical Society held their annual Cemetery Crawl. Tickets allowed the shuttle of hundreds of guests from the Teller House parking lot to the Cemetery. Depending on v... END_OF_DOCUMENT_TOKEN_TO_BE_REPLACED