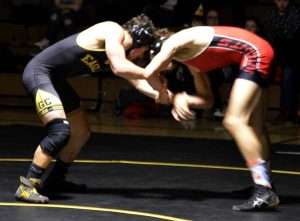 Gilpin High School’s gym was a hive of activity on Saturday, January 27, as the Eagles hosted several teams at a wrestling invitational. Turnout was good, and grapplers persevered through five rounds, starting at 9:00 a.m. and lasting through mid-afternoon.

The wrestlers shook hands to start each match and began circling each other at the referee’s whistle. Guy and gal wrestlers sweated and strained through Half Nelsons, headlocks, takedowns, and pins. The wrestlers clasped hands at the end of the match in good sportsmanship, and the ref lifted the hand of the victor.

The Gilpin results were as follows:

“We have a good chance at regionals,” noted Morgan about the upcoming tournament in Sterling next month.

The girls’ 2018 state championship will play out at Thornton next Saturday, February 3. Joyce Jewell and Skyler Murdock will go to the event, and the whole team will accompany them in support.

A dual meet is a wrestling competition that pits wrestlers at each weight class from one team against opponents from another.

“Duals is the most team-oriented event,” Morgan explained. “Dual points are utilized for tournaments.” He also emphasized the individual nature of wrestling, stating that Gilpin doesn’t belong to a league.

Morgan acknowledged the size and toughness of the Fairview and Evergreen schools, but said that the size of the school doesn’t matter – an individual from a small school has as much chance to excel as one from a big school.

“We want to go against the toughest wrestlers we can get. This is a good opportunity to prepare to do well at regionals. This event is for those who have done work during the off season.”

In contrast to the invitational on Saturday, the tri-meet was held in Gilpin’s old gym, which was darkened except for one bright spotlight centered over a single mat.

Fairview and Evergreen junior varsity wrestlers led off with three matches, followed by their varsity grapplers. When their round was completed, Gilpin wrestled the Fairview Knights and concluded the evening by battling the Evergreen Cougars.

The Eagles enjoyed several wins. Mike Wenholz went 2 and 0 for the night, which the coach reminded was a big deal, considering that just a few months ago, Wenholz was in a wheelchair recovering from a broken leg sustained during last fall’s football season. Wenholz is now 6 and 1 after returning from his broken leg.

Will Innes went 1 and 1, and he likewise had recovered from a broken bone. Josh Trujillo and Triston DiPasquale were each 1 and 1.

In other results, Skylar Murdock, Joyce Jewell, and Manny Gomez were 0 and 2.

“The individual results don’t tell the whole story,” Morgan reported. “We had an outside chance to beat Fairview as a team, and it almost happened. We wrestled high level competition, and we competed very well. This was the first time we hosted a school with an enrollment over 2,000, and they barely escaped.”

Youth wrestlers from Gilpin competed at Bennett High School for the metro league regionals on Saturday, January 27. Jett Hanssen, U8 73, took third place. Ryan Hanssen, U10 98, took second place, and Mason Sechler, U10 98 took third place. These three wrestlers qualified for the state championship, to be held at the University of Northern Colorado on Sunday, February 4.

END_OF_DOCUMENT_TOKEN_TO_BE_REPLACED

Where the dead get to tell their story By Jaclyn Schrock On Saturday, August 21, the Gilpin Historical Society held their annual Cemetery Crawl. Tickets allowed the shuttle of hundreds of guests from the Teller House parking lot to the Cemetery. Depending on v... END_OF_DOCUMENT_TOKEN_TO_BE_REPLACED