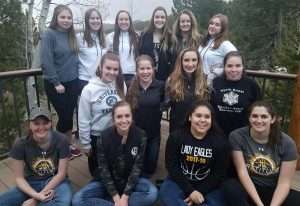 Sticking with their mission, vision, and principles leads to successful season

The Gilpin High School girls’ varsity basketball team held its end-of-season banquet on Thursday evening, April 12, at a Black Hawk residence. The banquet followed a few games of bowling at the Wild Game in Evergreen.

Parents receiving special recognition for their “above and beyond” support of the program included Kevin Armstrong, Gigetta Nadeau, and Jenny Lepro — all parents of seniors who will be missed.

Several others were commended for the time and dedication they put into the team, including Assistant Coach Alan Smith, Andromeda Ramsey, Brook Ramsey, and Katura Sales. Sales served as the school’s certified athletic trainer this season. 2005 alumnus and former Lady Eagle All-State player Andrea Bentley-Freeman (Galanski) was a volunteer assistant coach.

Schuessler prefaced the recognition of the players and the season overview with the mission, vision, and principles that the team members themselves established for the season.

The mission was “to be a team respected on and off the court for its competitive drive, relentless effort, positive attitude, and selfless actions.”

The vision was “to finish the season with a winning record, upset at least one ‘better’ team, win at least one playoff game, achieve a cumulative team GPA of 3.5 or better, and perform at least one community service.”

The principles followed the G.I.L.P.I.N. acronym. “Good: frame everything from a positive perspective. Intensity: S.C.H.A.P.E. everything by bringing positive Spirit, Communication, Hustle, Approach, Precision, and Enhancement to all we do. Loyalty: F.A.M.I.L.Y. Forget About Me, I Love You. Persistence: N.D.C.Q. Not Dead, Can’t Quit. Integrity: extreme ownership of our own and our teammates’ actions on and off the court. No Fear: Meet every challenge head-on.”

The second annual First Responder Luncheon in December was the team’s community service project, Schuessler noted, along with two donations of money to local causes.

Schuessler recapped the season. “I’d like to thank the team for one of the best coaching experiences I’ve had. The team members completely fulfilled their mission and only missed one of the goals outlined in our vision. The team finished with ten wins and 11 losses, despite losing sophomore post Jessica Wilhelm just six games into the season. Nine of our losses were to regional qualifiers, and three were to teams who won their region and qualified for the state tournament.”

The team pulled off three upsets against West Grand, Longmont Christian, and most notably, a playoff win at Union Colony Prep, which beat them by 24 points only a month prior. The season was ended the next night by a loss to eventual state runner-up Clear Creek.

The team was made up of only sophomores and seniors this year. Each player was recognized by the team principles they best demonstrated.

The seniors were encouraged to create and continue to follow a set of principles that would allow them to make good decisions beyond high school. Each senior earned a four-year commitment award for dedication to the program all four years of high school. Carly Johnson and Trystin Swan received first-year letters. Katelyn Armstrong earned a third-year letter. Cicely Lepro and Aspen Nadeau were awarded fourth-year letters. Lepro was also praised for having a particularly significant impact on the program during her career.

Lepro and Nadeau were voted by their teammates as Team Culture Co-MVPs for their roles as creators and caretakers of the team’s standards.

Schuessler concluded by reminding everyone that the off season is really the “improvement season” and noted that the players are already in the weight room and in the gym working toward next year’s vision.

END_OF_DOCUMENT_TOKEN_TO_BE_REPLACED

Benefitting the county, schools, and much more By Don Ireland   This year marks the 30th anniversary of casinos opening in the former little mining towns of Black Hawk, Central City and Cripple Creek, Colorado. In those early years, smoking was allowed inside ... END_OF_DOCUMENT_TOKEN_TO_BE_REPLACED