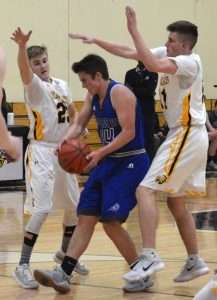 Lady Eagles get a playoff win over Union Colony

The Gilpin Eagles varsity boys blasted the Lyons Lions 64-53 on Tuesday evening, February 20, in a 2A District 7 league playoff game on Gilpin’s court. The match had been scheduled for Monday night but was canceled due to the snowstorm.

The varsity girls also brought home a victory as they triumphed 31-27 over Union Colony Prep of Greeley.

Both Gilpin teams will be traveling to Clear Creek on Wednesday, February 21, for quarterfinal contests.

Semifinal games are being held on Friday the 23rd, with the final District championship battles to be played on Saturday the 24th.

The boys played to a small but vocal crowd in the Gilpin gym Tuesday night. The Eagles were seeded sixth going into the finals, and Lyons was seventh.

The Eagles and the Lions held each other from scoring until 4:52 in the first quarter, when the Lions scored the first 2 points. Will Lorenz of Gilpin put in a three-pointer to answer, followed by a steal by Tanner Davis. John Immordino helped with a couple of points. Lyons managed to put up a couple of free throws, and the score stood at 7-8 Lyons at the end of the first quarter.

Lyons pushed ahead in the second period with 3 three-point field goals, while Gilpin scored some buckets by Alex Wilhelm and Lorenz and a free throw by Davis. The Lions opened up a 9-point lead before Gilpin began serious hitting by Davis and Nolan Lindberg. The Lions were stuttering as they watched their lead evaporate with less than a minute remaining in the period. The home fans thundered the Eagles to a tight 26-24 lead at halftime.

The Gilpin players capitalized on their success early in the third quarter with field goals by Austin Boulter, Alex Wilhelm and Lorenz. The score shot to 37-27 Gilpin, and the Lions had to depend on free throws for points.

It was 44-37 Eagles at the start of the last quarter. Lyons attempted to rally with a three-pointer and some clean free throws. The closest they were able to come was within 6 points, but Gilpin kept up the pressure with 2-pointers by Davis and Boulter. Chris Burtschi, Lindberg, and Davis all stepped successfully to the free throw line for Gilpin with less than 2 minutes to the buzzer. The tally was 63-53 when Lindberg added the final free throw for the Eagles at 2 seconds remaining.

The Lady Eagles returned triumphant from their match with Union Colony. Few details were available at press time, but Gilpin maintained a slim lead throughout, and the girls can be proud of the way they played.

Gilpin boys finished their regular season 8-11 overall, with a 6-6 league record. They lost their final season game last week when they met the Dayspring Christian Academy Eagles of Greeley on February 13 in away league play.

The Lady Eagles were also defeated by Dayspring, completing their regular season with a 9-10 record, including a 4-7 league tally.

END_OF_DOCUMENT_TOKEN_TO_BE_REPLACED

Benefitting the county, schools, and much more By Don Ireland   This year marks the 30th anniversary of casinos opening in the former little mining towns of Black Hawk, Central City and Cripple Creek, Colorado. In those early years, smoking was allowed inside ... END_OF_DOCUMENT_TOKEN_TO_BE_REPLACED

Benefitting the county, schools, and much more By Don Ireland   This year marks the 30th anniversary of casinos opening in the former little mining towns of Black Hawk, Central City and Cripple Creek, Colorado. In those early years, smoking was allowed inside ... END_OF_DOCUMENT_TOKEN_TO_BE_REPLACED