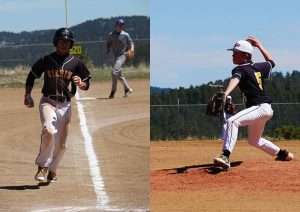 The Gilpin varsity track and field team visited Elbert on April 20 for the non-conference Kiowa Invite Meet. Both the boys and girls did reasonably well, the boys coming in 12th of 18 teams and the girls earning 10th place.

This is a team to watch, as Gilpin athletes were runners-up in several events. Stephen King strode to 2nd in the 200-meter dash, Nicole Adams placed 2nd in the high jump, and the girls’ relay team made it to 2nd place in the 4×100-meter.

Other highlights included the Gilpin boys’ relay team coming in seventh in the 4×100-meter relay, Lena Warren shooting to 6th in the 1600-meter, Hale Warren dashing to 12th place in the 300-meter hurdles, and the girls’ relay team making it to sixth place in the 800 sprint medley.

The Husky Invitational Meet, a non-conference event, took place at Edwards on April 16. Both the boys and girls teams raced to eighth place.

Stephen King placed third in the both the 100-meter and 200-meter dash events, while Lena Warren strode to an eighth-place berth in the 1600-meter. Madison Altman lobbed the shot put to make it into the top ten in that event.

Gilpin’s varsity baseball team traveled to Evergreen for a matchup with the Clear Creek Golddiggers. The Eagles were the home team for that conference battle, losing to the Golddiggers 16-5. The Eagles’ record is now 1-5 for the season, the win being for a conference game against Lyons.

The game started evenly, with both teams scoring one run in the first inning. Clear Creek pushed ahead significantly in the second inning with 5 runs. The Eagles dominated the third inning with 2 points, while the Golddiggers were unable to score. Gilpin’s rivals managed 10 points in the fourth and fifth innings, while the Eagles racked up 2 more. Gilpin scored a total of 5 runs and had 9 hits.

Gilpin’s Angel Gomez pleased the fans with 2 runs, 2 hits, 1 RBI and a triple. Braden Harris, Dallas LeBeau, and Chad Holmes also scored with 1 run each. Will Lorenz clubbed 2 hits and also had 1 RBI. Harris, LeBeau, Holmes, and Alexander Rodriguez had 1 hit each. LeBeau and Holmes helped the Eagles with 2 stolen bases. Blake Boulter impressed with 9 putouts and 1 assist.

Will Lorenz pitched 3 innings for the Eagles, striking out 9 batters. LeBeau and Holmes also took the mound for a portion of the game.

Jacob Mazurek was the winning pitcher for the Golddiggers. Clear Creek also came in with 8 double plays.

END_OF_DOCUMENT_TOKEN_TO_BE_REPLACED

Where the dead get to tell their story By Jaclyn Schrock On Saturday, August 21, the Gilpin Historical Society held their annual Cemetery Crawl. Tickets allowed the shuttle of hundreds of guests from the Teller House parking lot to the Cemetery. Depending on v... END_OF_DOCUMENT_TOKEN_TO_BE_REPLACED