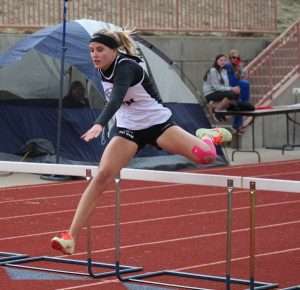 Gilpin High School’s track and field athletes were hosted by Elbert High School at the Kiowa Klassic on Saturday, April 23. The event was a non-conference meet.

Head track coach Craig Ball commented, “We had great weather for the Kiowa meet. The kids were real troopers, because many of them had prom and after prom until 3:30 a.m., and our bus departed at 5:30am. Chase Boulter had a new personal best in the high jump at 5’5” and placed second in the meet. All of our relays performed well. Our boys’ 4×400-meter relay placed third in the meet.”

The Gilpin Eagles had an excellent game against the Rocky Mountain Lutheran Eagles (RML), coming in with a 10-9 win at the April 25 neutral conference game. The Eagles are 6-5 for the season, while their closely-matched opponents are 5-4.

Neither team managed to score in the first inning but then Gilpin picked up steam, scoring 2 runs in the second. Both teams scored 2 runs in the third. It was RML’s turn to move ahead in the fourth inning as they put 3 points on the board. Gilpin answered with 2 runs in the fifth inning to RML’s 1. Scoreless again in the sixth. Both teams mustered their best efforts in the final inning, Gilpin scoring 4 runs and RML 3 to end it 10-9 Gilpin.

Bjorn Tomlinson was named Player of the Game for Gilpin. “He went 2 for 4 at the plate, with a 2-run home run, and also did a nice job catching,” noted Head Coach Tony Lorenz.

Jon Lovett was top scorer for Gilpin with 3 runs, followed by Braedyn Perez with 2. Tomlinson pleased the Gilpin fans with that homer. Getting 1 run each were Eryk Lorenz, Sam Snyder, Chase Boulter, Jon Gonzales, and Tomlinson.

The team cracked 13 hits, 2 each by Snyder, Will Lorenz, Nick Peterson, Tomlinson, and Lovett. Perez, Boulter, and Gonzales each got 1 hit.

RBI’s were gained by W. Lorenz, Peterson, and Tomlinson with 2 each and Snyder and Lovett with 1 apiece. The team had 5 doubles.

Gilpin had scored 3 runs by the end of the fourth inning before MHA put points on the board. The Eagles also got 3 runs in the fifth inning, and MHA attempted to make up for lost time by getting 3 runs of their own in that period. No one scored in the sixth, but the Eagles ran in two more in the seventh inning, and MHA scored 4 more runs.

Chase Boulter was selected as Player of the Game for Gilpin; he pitched 3 innings and struck out 9 of 10 batters faced.

Scoring runs for the Eagles were E. Lorenz, Perez, and Lovett (2 each). The team garnered 11 hits, including 3 by Perez and 2 each by Lovett and E. Lorenz. RBI’s were achieved by Snyder, W. Lorenz, Lovett, and Tomlinson. E. Lorenz and Tomlinson both had doubles.

The Eagles managed 15 stolen bases, including 4 by E. Lorenz and 3 by Perez.

Once again, Gilpin mustered 21 put-outs, including 14 by Tomlinson.

Boulter and W. Lorenz pitched for the Eagles. Lorenz struck out 4 batters in 4 innings pitched.

The Eagles’ baseball players were crushed by a count of 11-3 in a non-league contest vs. the Lyons Lions on April 21.

The Eagles squad scored runs in the first, fourth, and sixth inning and boasted 7 hits. The Lions scored 3 runs in the first inning, 2 in the third, 1 each in the fourth and fifth, and finished with 4 in the sixth. They had a total of 10 hits.

Will Lorenz was Player of the Game for Gilpin. Head Coach Tony Lorenz said, “Will had an outstanding game, going 2 for 3 at the plate and getting 1 RBI. He had 2 putouts and 3 assists, one on a double play.”

Gilpin claimed 7 strikeouts against Lyons batters, but were themselves struck out 12 times.

The Eagles did well on put-outs with 17; Bjorn Tomlinson got 8. Lyons had 21 put-outs and 8 assists.

END_OF_DOCUMENT_TOKEN_TO_BE_REPLACED

Benefitting the county, schools, and much more By Don Ireland   This year marks the 30th anniversary of casinos opening in the former little mining towns of Black Hawk, Central City and Cripple Creek, Colorado. In those early years, smoking was allowed inside ... END_OF_DOCUMENT_TOKEN_TO_BE_REPLACED

Where the dead get to tell their story By Jaclyn Schrock On Saturday, August 21, the Gilpin Historical Society held their annual Cemetery Crawl. Tickets allowed the shuttle of hundreds of guests from the Teller House parking lot to the Cemetery. Depending on v... END_OF_DOCUMENT_TOKEN_TO_BE_REPLACED