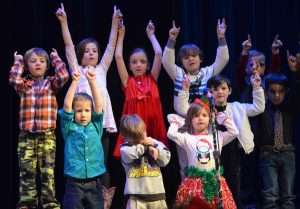 The air was alive with holiday spirit as Gilpin Elementary students from preschool through third grade presented their winter music and arts program on Thursday, November 30. It was a packed house in the auditorium as parents sat with their children, who watched each other perform. Youngsters were dressed in their best brightly-colored frocks or button-down shirts.

Music director Misti Ebers welcomed the guests. “I’m excited to have worked with all your kids. It’s a wonderful pleasure to be here.” She noted that the artwork gracing the walls of the adjoining atrium correlated with what was going on onstage. Ebers also thanked elementary principal Heather Huntoon, the teachers, staff, and middle school and high school helpers.

Each class preceded their numbers by reciting a warm-up poem and doing a mild exercise to help them breathe and get focused to sing. The performances were guided by recorded accompaniment and artistic photographs projected on a large screen to enhance the mood of each song.

The Montessori primary pupils opened the program with an energetic dance to “Rockin around the Christmas Tree,” followed by the gentle strains of the Hanukkah tune, “Burn Little Candle.” Students from the traditional kindergarten class followed with “Keep it Light.” First graders belted out the humorous “Ode to Thanksgiving” about turkey dinner, sung to the tune of Beethoven’s “Ode to Joy.” The second graders’ selection was “Kwanzaa is Here,” by the Kiboomers, who create fun learning songs for children. “We light a candle every night …” the kids warbled.

During intermission, parents, grandparents, and older siblings wandered out to the atrium to view the children’s artwork. Fourth graders’ graceful doves floated through pastel skies, while the Montessori preschoolers’ jolly snowmen danced through cottony snow drifts. “Kwanzaa hands” crafted by the Montessori students displayed the virtues of self-determination, cooperative economics, creativity, unity, purpose, and collective work and responsibility. Kindergarteners brightened up the walls with strings of Christmas lights, and first graders put together some pretty tasty-looking fruit pies – all out of good old construction paper. Third graders’ “trains and penguins” were a study in wintry blue watercolor. Art teacher Curt Halsted had guided his students in producing these talented creations.

Montessori first through third graders began the second half of the show with the musical question, “What’s in that Stocking?” (Could it be coal? Doubt it – they have all been good.)

“Down by the Station” was performed by the traditional third grade kids, with the help of “boomwhackers,” colorful, lightweight percussion tubes. They made up their own clever verses on that song, as well, then followed it up with the sweet and soothing “Menorah Glow.”

The grand finale was “Groovin’ Elf Dance,” presented by the kindergarten through third grade children. The young performers created a “surround sound” effect as they spread out throughout the auditorium and lined the stage. The heavy blue curtains parted to reveal a background of snowy Christmas trees.

Music director Ebers concluded with thanks to Superintendent David MacKenzie and the elementary staff, the parents, and the school board for their positive presence. Behind-the-scenes thanks went to art teacher Halsted, elementary secretary Joni Schmidt, the custodians, and student Zach Gebhart for running lights.

“Have a safe and happy winter holiday!”