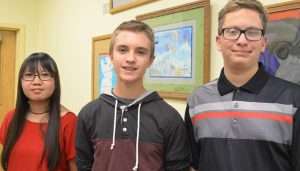 The Gilpin County Board of Education held its regular meeting on Tuesday, September 19. Meetings usually begin promptly at 7:00 p.m.; however, no quorum was present on the 19th to transact business until 7:14 p.m. Board members present were Craig Holmes, Brook Ramsey, Charlotte Taylor, and Kersten Armstrong. Superintendent David MacKenzie, Secondary Principal Alexis Donaldson, and Elementary Principal Heather Huntoon were also present. Board member Steve Boulter and Secretary to the Board Joni Schmidt were absent.

Artist of the Month

Allyson Webb was chosen as this month’s artist, for her painting done at the end of the 2016-17 school year. Her colorful work in oil pastels showed an ocean scene and integrated a math lesson; the students’ projects were to incorporate their favorite facts from the multiplication table. Allyson chose the “9’s” and selected “9 x 5” as her favorite. Each fish had a sum painted on it, noted art teacher Curt Halsted.

The varsity and junior varsity volleyball teams have done well so far this season. On the night of the school board meeting, they defeated Nederland.

The football team has also been successful, beating Caliche, the number nine ranked team in the state, on September 15.

The elementary theatre department enjoyed a successful benefit, “A Taste of Broadway,” on the 15th, raising over $2,000. With the donations, they hope to get materials for the theatre program. The students performed songs from their upcoming musical, “Annie Kids,” and the adult staff members and special guests performed also.

Three students in Heather Newman’s secondary science class have been working since last spring on an energy audit of Gilpin County School. Newman said the project aligns with Colorado academic standards and furthers the goal of training students in 21st Century science skills. The audit encouraged them not only to learn about energy as it relates to science, but also to consider how energy usage affects financial aspects in business. She added that the students took on the audit on their own; it was not part of their science curriculum.

The students, Chad Holmes, Cooper Lindberg, and Anna Yocom, asked the question, “How can we reduce the use of energy in our school facility?” They worked in collaboration with a professional energy auditor that had visited the school.

After checking out a number of systems, including heating, lighting, refrigerated beverages, and others, the students had personal recommendations for how Gilpin school can save energy and costs.

The students’ suggestions included turning off computers when not in use, upgrading water fixtures, getting occupancy sensors for refrigerated beverage machines, installing destratification fans in large rooms such as the gym and multi-purpose room to move warm air down, and upgrade lighting to save electricity.

Board member Holmes said he would like to see a study on how the students came up with their costs. “It’s great info,” he said. “I’d like to have it printed out to review.”

Taylor appreciated the work done by the students, concluding, “We want to be at the forefront of energy conservation.”

The Board approved the check vouchers and financial statement for August 2017, the quarterly financial report for the second quarter of 2017, and the human resources’ report. Business Manager Terry Scharg advised in a memo that she and the auditors are still finalizing the numbers for 2016-17. Revisions for the 2017-18 budget will begin soon.

Checks from the general fund dated in September included $99,224 to Go Play, Inc. for the new playground and $286,984 to Jim Noble, Inc. for excavation.

The Board reviewed many policies on first reading. A Safe Schools policy addressed the need for security in the building and on the grounds and training programs for staff and students. Security/Access to Buildings policy addressed the installation of alarm systems to protect against illegal entry.

A new sample policy on the use of video and audio monitoring was considered, and the Board discussed adding security cameras in the atrium and lunchroom. The Board pondered how long video recordings should be stored and the importance of preserving records and not having them accidentally recorded over. The District does have video cameras for transportation vehicles, Superintendent MacKenzie noted.

He explained a policy on out-of-district applications for admission. Students may be enrolled after October 1 (the official student head count date for funding). If a student resides in the District, they must be admitted.

The policy on violent and aggressive behaviors arises from the Claire Davis Act (for the girl killed in the Arapahoe High School shooting in 2013) and defines behaviors such as possession or threat of a weapon, physical assault, verbal abuse, bullying, sexual harassment, and discriminatory slurs. Students are encouraged to tell someone if they see or hear something concerning; they can make anonymous reports to the Safe2Tell organization.

A policy was considered on student use of cell phones and other personal technology devices. The Superintendent noted that students are provided with technology. It’s okay to have cell phones, but they must be put away during class. Some teachers make exceptions for students to listen to music. Cell phones are not allowed in bathrooms due to possible violation of others’ privacy.

A draft of a new exhibit regarding transgender students was discussed, with MacKenzie’s explanation that it is not a policy, but it goes along with non-discrimination policies. The guidelines set out a protocol for staff on how to implement state law in situations regarding transgender students. It was developed in conjunction with the school’s attorneys. The exhibit notes that a transgender student should be provided access to a single stall restroom if desired, but will not be required to use it. Locker room use would be assessed on a case-by-case basis, but in most cases, transgender students “should have access to the locker room that corresponds to their gender identity.” The guidelines also discuss overnight activity and athletic trips, dress codes, discrimination, and transfers to another school.

MacKenzie advised that Gilpin does not offer any extracurricular activities for the elementary school. Currently, there is no theatre program offered at the Gilpin Community Center, so the school’s program would not be a duplicate.

“Part of this is precedent setting. We could do it for one year and see how it goes.”

The schedule included a recommended first-year stipend for the elementary theatre director of $1,640, going up to $2,149 by the fifth year. The assistant director’s stipend would remain at $820 for all five years.

Board member Ramsey was concerned about a precedent being set that would be difficult to continue if more people said they wanted to lead an activity and be paid for it. She emphasized that she has nothing against the theatre program and felt it was “awesome.”

When it became apparent that the members would not come to an easy agreement on the issue, they suspended discussion until after the public portion of the meeting and continued during an executive session afterward.

Principal Huntoon reported that teachers received training in a writing workshop. Teacher goals for the year are centered on student learning, intentional teaching, and parent communication.

Several fall field trips are planned, including 100 Elk, the fish hatchery, the Denver Zoo, NCAR, Super School News, and others. All are aligned to standards.

Fifth graders are participating in a trout project, with an aquarium set up in Mrs. Grenader’s room.

Teachers participated in a professional development day on September 8, working through their Design Thinking process and sharing their Design Challenge. The challenges addressed student engagement and ownership of learning, academic integrity, and student self-progress monitoring. They spent time on using assessments as identified in Marzano’s “The New Art and Science of Teaching.”

Sports teams are off to a strong start.

Sophomores will attend the 2017 Jeffco Career Expo, a day of educational and interactive career exploration opportunities.

Homecoming weekend events include the parade through Black Hawk and Central City on Friday, September 29, at 4:00 p.m., the football game vs. Plateau Valley on Friday at 7:00 p.m., and the dance at the Teller House on Saturday, September 30, from 7:00-10:00 p.m.

MacKenzie noted that Schooldiggers.com placed Gilpin among the top ten districts in Colorado, giving it a five-star rating. Of the 109 districts ranked, Gilpin is eighth.

New traffic and informational signs have been installed. The deal on the playground fence has been sealed and work should start soon. The cliffs along the road by the cabin still need to be mitigated and have clear barriers put in. MacKenzie is waiting to hear from the civil engineer on the steps and the water erosion on the south parking lot.

A third water advisory was sent out to parents. The organic compounds are coming down in volatility. Filtered water may be used for cooking. It’s drinkable, MacKenzie said, “but we choose not to and are using bottled. We are running weekly tests.”

A lockout was conducted on September 12.

A complaint about night lighting on the campus had been made via Facebook. MacKenzie said the lights are off from 11:00 p.m. to 5:00 a.m., and head custodian Ken Peterson had checked this at 1:00 a.m. on an unspecified date. MacKenzie said the District tries to balance the neighbors’ needs with the need for safety.

The Board adjourned the public portion of the meeting at about 9:15 p.m. and went into executive session pertaining to personnel matters.